A key molecule for embryonic bone development is dysregulated in cancer

Bone is an endocrine organ with important biological functions. The skeleton produces hormones, such as FGF23 and osteocalcin, which regulate an extensive list of normal functions. Some of these functions include glucose metabolism, male fertility, blood cell production and calcium/phosphate metabolism. Genes that carry out these processes are specific to bone cells. Some of these genes can be wrongly expressed by other cells which may cause disease. MicroRNAs (miRNAs) are molecules that regulate the level of gene expression in all our cells. One miRNA in particular, miR-140, is unique to a bone cell known as a chondrocyte. During normal embryonic development, miR-140 regulates the genes involved in building bone and forming the skeleton. However, miR-140 can be incorrectly switched on or lost in other cells as an adult. Genes that normally protect against cancer become imbalanced. 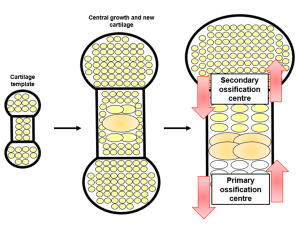 Fig. 1. The skeleton is first formed as a cartilage model. When complete, chondrocytes in the central regions undergo a molecular switch to enlarge in size. They also produce a new form of cartilage which allows mineralisation with calcium and phosphate. In the primary ossification centre, osteoblast cells replace chondrocytes and form proper bone. Remaining chondrocytes reside at the end of the bone in the joints. They maintain their population in the secondary ossification centre.

Green et al. review the evidence demonstrating miR-140 is important for normal embryonic development but harmful when dysregulated in adult breast, colon and lung tissue. Understanding the parallels between embryonic development and tumour growth provides insight to molecular mechanisms which may be studied and manipulated for new strategies against cancer.

In a human embryo it takes eight weeks post-conception for the skeleton to begin to form, one of the last organs to form before becoming a foetus. With the exception of parts of the skull, the jaw and medial clavicle where bone is formed anew, embryonic bone development is regulated by a process called endochondral ossification. Alike all vertebrates, endochondral ossification determines the differentiation of stem cells into bone cells known as chondrocytes. The entire skeleton is first laid out as a cartilage template by chondrocytes before replacement with bone and osteoblast cells (Fig. 1). Genes important for this process include RUNX2, SOX9, COL2A1, COL10A1, BMP2 and PTHLH.

Messenger RNA (mRNA) is the set of instructions produced by DNA. Each mRNA molecule – constructed from ‘reading’ a gene – is trafficked out of the cell nucleus where it ‘codes’ for a specific protein. These proteins can range from hormones and antibodies, to enzymes and tumour suppressors. In a natural mechanism of gene control, mRNA molecules can be physically obstructed by non-coding RNA molecules such as miRNAs. This process known as RNA silencing effectively switches off the gene because protein production is inhibited (Fig. 2). 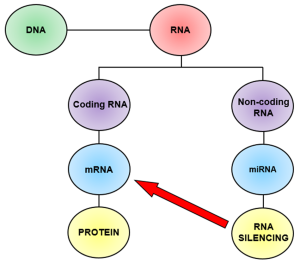 Fig. 2. DNA is the blueprint of our cells. It codes for protein through a set of instructions known as messenger RNA (mRNA). DNA also produces molecules involved in regulatory control to maintain the cell. MicroRNAs (miRNAs) are one type of an enormous family of non-coding RNA molecules that achieve this maintenance through ‘RNA silencing’.

In embryonic chondrocytes many miRNAs control genes important for bone development. One such miRNA, miR-140, is key for the development of the skeleton. In precise timing, miR-140 works in combination with genes such as SOX9, COL2A1 and WWP2. Inappropriate expression in other cells as an adult has been linked to cancer. In colorectal and liver cancer loss of miR-140 results in uncontrolled expression of NF-κB, a known molecule for promoting tumours. Oestrogen-driven breast cancers also restrain miR-140. This activity promotes the action of cancer stem cells which are known to cause metastatic disease and cancer recurrence. Ovarian cancers switch off miR-140 as a tactic to enable the cancer cell to repair itself after treatment with chemotherapy.

In contrary, miR-140 can be incorrectly upregulated. In head and neck tumours, the gene for producing miR-140 was found to be duplicated. An over-representation of miR-140 suppresses the genes involved in normal cell cycling and signalling. When testing the effects of chemotherapy on bone cancer cells, miR-140 expression was discovered to support the resistance of two commonly used treatments. The opposite is true in stomach cancer where miR-140 expression is linked to increased chemosensitivity. The dual role of acting as a ‘good cop’ and ‘bad cop’ is an added complexity to studying cancer biology. With the advent of miRNA therapies on the horizon, it is of fundamental importance to understand the interplay between molecules such as miR-140, the cell type and time of expression.