A natural transgene may help plants to adapt to local conditions

Transgenes are genes that have moved from a donor to a recipient organism via a process known as horizontal gene transfer (HGT), in the absence of sexual reproduction. The genetic modification of crop species involves the deliberate creation of transgenic organisms, and there is widespread unease about the artificial use of HGT in the process of creating genetically modified crops. 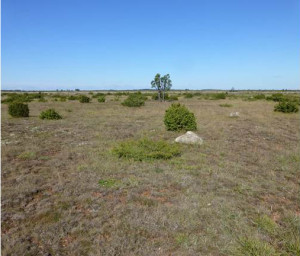 However, the horizontal transfer of genes between distantly related organisms also occurs naturally. For example, an increasing number of studies reveal that mitochondrial genes have been horizontally transferred between distantly related species of flowering plant. In contrast, reports of natural examples of the horizontal transfer of nuclear genes, with flowering plants as both donor and recipient, are still scarce and, in most cases, the function of the borrowed genes is unknown.

Our study organism was a species of grass, sheep’s fescue (Festuca ovina), in which some individuals carry a transgenic copy of the nuclear gene coding for the enzyme cytosolic phosphoglucose (PGIC) – in addition to the “native” copy of the gene. The function of the PgiC transgene is known, the gene is expressed, and it produces fully functional enzyme products.

The steppe-like “alvar” grasslands (Fig. 1) on the Baltic island of Öland (Sweden) are characterized by a high diversity of different microhabitats that occur in a fine-scale, repeating patchwork that is replicated within spatially separate sites. We show that 30% of the individuals in the alvar populations of F. ovina carry the functional PgiC transgene, and that the distribution of individuals with the transgene is significantly related to the fine-scale habitat variation in the alvar grasslands. Our results suggest that the transgene may be contributing to local adaptation to the fine-scale mosaic of different alvar microhabitats.

So far, no other studies have demonstrated associations between the within-individual presence of naturally acquired transgenes, their expressed products and habitat variation within populations of plants or, to our knowledge, animals.