Reperfusion therapy is currently the mainstay of acute myocardial infarction treatment; it salvages myocardial cells from ischemic cell death. However, abrupt restoration of coronary blood flow induces another type of cell death, called “lethal reperfusion injury”, which attenuates the beneficial effects of reperfusion therapy. Despite extensive efforts to overcome this adverse phenomenon since decades, no approach has proven successful in preventing this “injury” so far.

We recently reported a new approach for protection against lethal reperfusion injury, which we termed postconditioning with lactate-enriched blood. This approach consists of intermittent reperfusion and timely injections of lactated Ringer’s solution directly into the culprit coronary artery instead of abrupt restoration of coronary blood flow to the ischemic myocardium. In our protocol, the duration of each brief reperfusion was prolonged stepwise from 10 to 60 s. Lactated Ringer’s solution (20–30 mL) was injected directly into the culprit coronary artery at the end of each brief reperfusion. Each brief ischemic period lasted 60 s, during which the injected lactate was trapped inside the ischemic myocardium. After 7 brief cycles of ischemia and reperfusion, full reperfusion was performed (the brief 60-s reperfusion was repeated twice at the end of the postconditioning protocol). 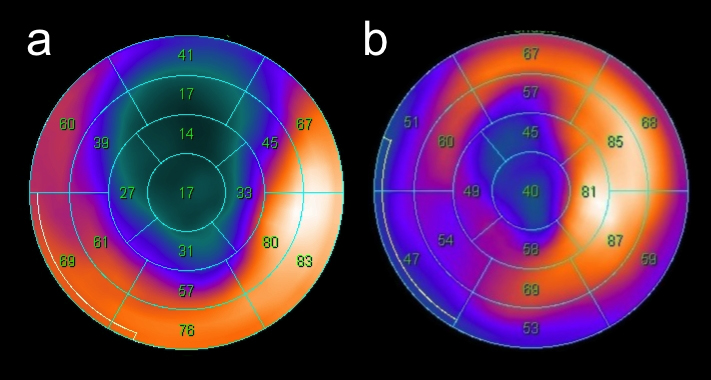 Comparison between predischarge resting thallium-201 scans from one patient each who were treated with conventional reperfusion therapy and postconditioning with lactate-enriched blood (PCLeB), respectively. a) A bull’s eye display of one of the worst cases treated with conventional reperfusion therapy (peak creatine kinase [CK] level, 6583 IU/dL). The dark area indicates an absence of myocardial thallium uptake, and thus, a loss of myocardial viability. b) A bull’s eye display of the worst case among more than 70 cases treated using PCLeB (peak CK level, 10190 IU/dL). Myocardial thallium uptake appears disproportionate to the peak CK level. The enhanced CK washout mechanism induced by PCLeB might lead to the higher peak CK level.

This new approach aims to achieve controlled reperfusion with cellular oxygenation and minimal lactate washout from the cells in the early reperfusion period, preventing the rapid restoration of vigorous myocardial contractions that are hazardous to the myocardium already damaged by prolonged ischemia. During ischemia, myocardial cells cease contraction to save adenosine triphosphate, an energy compound inside the cells, by accumulating lactate. Upon reperfusion, lactate is easily washed away and the myocardium immediately resumes vigorous contractions. Our new approach employed lactate as an inherent contractile activity blocker, keeping tissue lactate concentration high during the early reperfusion period. In a way, this method lessens the abrupt environmental changes induced by reperfusion. The tissue environment surrounding the myocardium during ischemia and after reperfusion is completely different. Our new approach allows a smoother transition between ischemia and reperfusion minimizing such violent environmental changes in the myocardium.

Despite the relatively small number of patients included in our previous studies, the consistently observed benefits of our approach, which have been evaluated in various ways, argue strongly in favor of our approach. Once the protective effects of this new approach have been confirmed in a larger number of patients, and considering the safety and inexpensiveness of lactated Ringer’s solution, we hope that this new approach will become a routine adjunct therapy for reperfusion therapy in cases of acute myocardial infarction.