Patients with symptomatic coronary artery disease often receive stent treatment in obstructed coronary arteries of the heart. Even though current generation drug-eluting stents perform very well in the short-term, concerns still exist about their long-term efficacy due to late clinical complications. These stents elute anti-proliferative sirolimus-based mTOR inhibitors to prevent cell overgrowth and re-narrowing again, called in-stent restenosis. However, they can also cause delay the healing process of the artery wall characterized by lack of endothelial regrowth and return of normal function. Healthy and functional endothelial cells are important to maintain the integrity of arterial barrier and prevent lipoproteins and inflammatory cell infiltration which are the genesis of native vessel atherosclerosis. In drug-eluting stents, the development of atherosclerosis within the stent (so called neoatherosclerosis) is accelerated relative to bare metal stent and is a leading cause of late stent events such as restenosis and stent thrombosis due to in-stent plaque rupture. Neoatherosclerosis may take months to a few years to develop within drug-eluting stents, whereas native vessel atherosclerosis takes decades. Thus, understanding the cause of neoatherosclerosis and how to prevent it is vital to improving long-term stent outcomes.

Prior work by our group has identified a mechanism by which sirolimus promotes endothelial permeability, independent of the mTOR signaling pathway. Sirolimus (and analogs, such as everolimus- eluting stents [EES]) inhibit mTOR through binding of the FKBP12 (FK506-binding protein 12)—a stabilizer of RyR2 (ryanodine receptor 2) intracellular Ca2+ release channels. By displacing FKBP12.6 (12.6-kDa FKBP12; vascular-specific isoform), sirolimus leads to activation of PKCα (protein kinase Cα), p120 phosphorylation, and p120– VE-CAD dissociation, impairing endothelial barrier function. These results suggest impairment of barrier function in drug-eluting stents may be a major cause of neoatherosclerosis and that strategies to inhibit mTOR directly without FKBP12.6 may improve EBF and eventually neoatherosclerosis.

In this study by Emanuel Harari and Liang Guo et al. published in September 2018 Journal of Arteriosclerosis, Thrombosis, and Vascular Biology, using a rabbit model of arterial stenting, a new type of drug was compared to conventional mTOR inhibitor drug, everolimus, used in drug-eluting stents. This new drug is called torin-2, a potent and selective mTOR inhibitor. Unlike the everolimus-eluting stents used clinically, torin-2 binds directly to mTOR (and does not bind to FBP12.6) and did not impair endothelial barrier function in the rabbit iliac stenting model. Microscopically, intact barrier function was also demonstrated by the presence of two important cell–cell adhesion junctional proteins named VE-cadherin (vascular endothelial cadherin) and p120-catenin. These two proteins work together to control the tightness between endothelial cells, losing them will cause leaky arteries. Replacing Everolimus drug with torin-2 reduced Evans Blue dye leakage into vessel wall, and maintained high levels of adhesion proteins in the junctions. These results suggested that it may be possible to overcome the long-term problem of neoatherosclerosis seen in drug-eluting stents by more selective pharmacological targeting of mTOR. 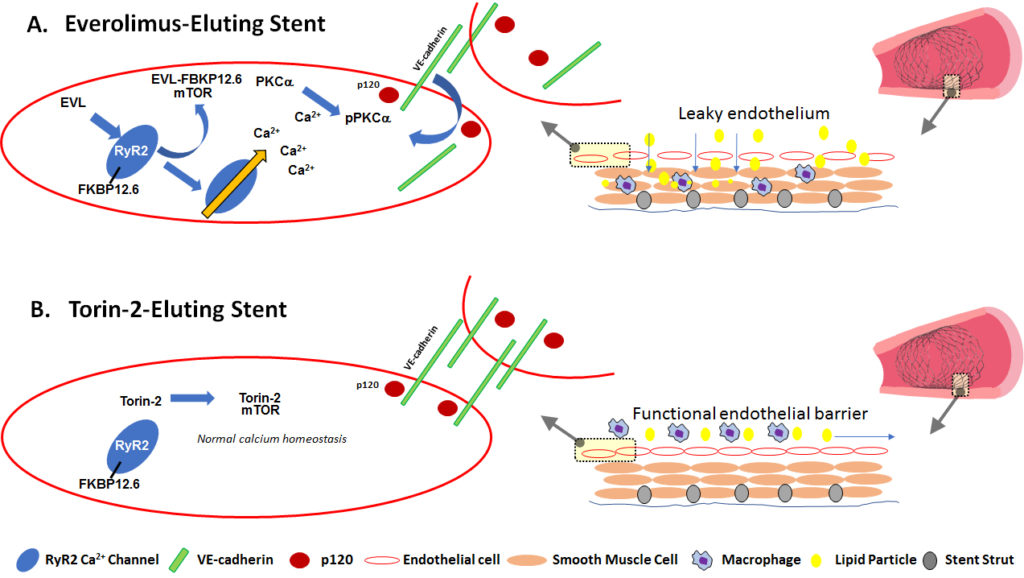 In conclusion, our study suggests further refinement of molecular targeting of the mTOR may be a promising strategy to develop new drug-eluting stent.