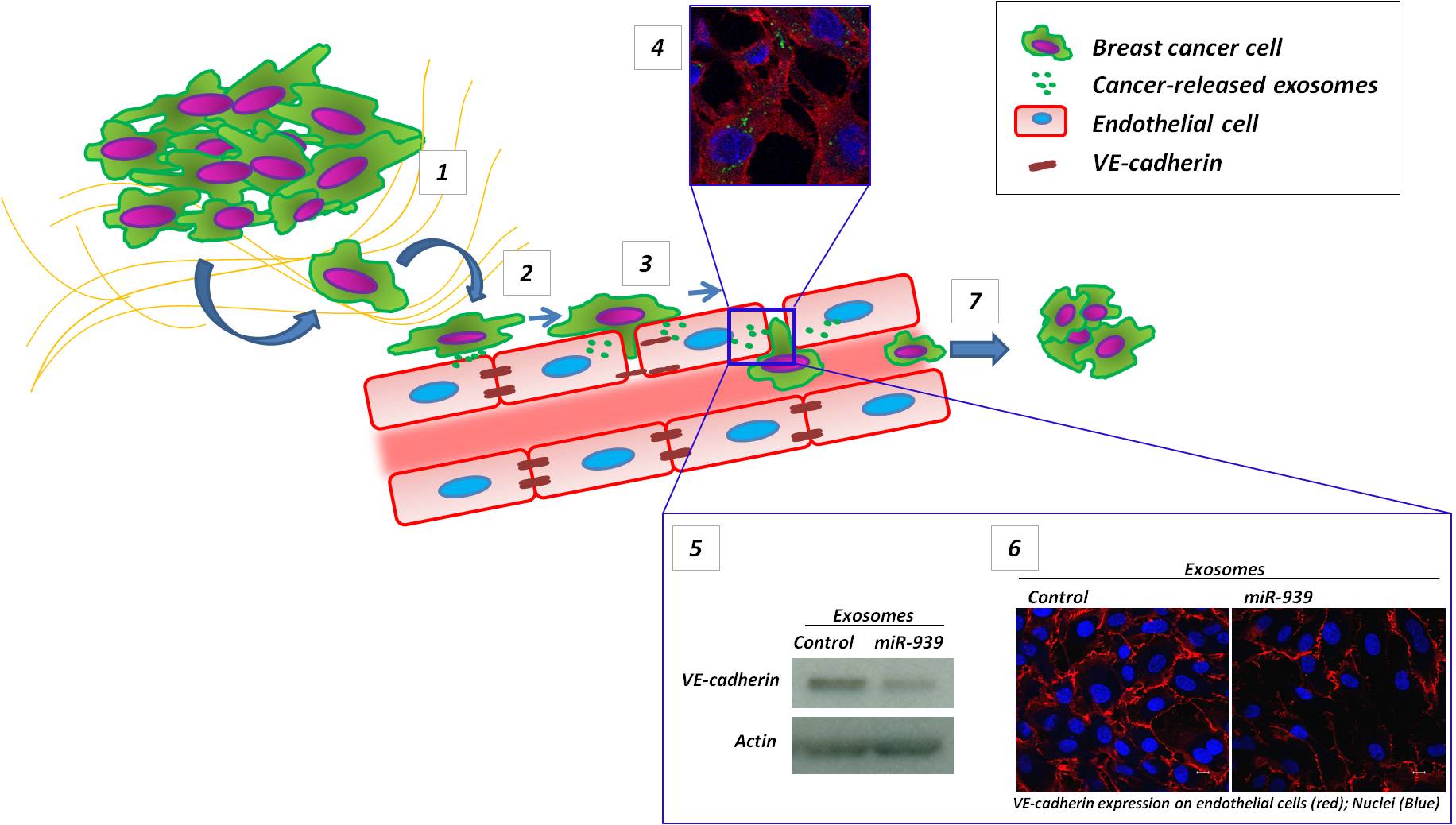 Due to the aggressiveness of TNBC, we focused our research on the mechanisms underlying the ability of TNBC cells to leave the primary tumor, enter in the blood stream and spread to distant organs to form secondary foci. In particular in this paper we studied the role of miR-939 in TNBC biology. MicroRNA (miRNAs or miRs) are small-non coding endogenous RNA molecules involved in the control of gene expression and their deregulation was associated with the risk and/or survival in various malignancies like breast cancer.

By analyzing The Cancer Genome Atlas data base that collects information from more than 1000 BC, we observed that TNBC expresses higher levels of miR-939 in comparison with other BC subtypes. Furthermore, the results obtained from our cohort of 63 TNBC patients from the Istituto Nazionale dei Tumori of Milan suggest that miR-939 represents a negative prognostic factor for disease free survival. Indeed, lymph node-positive tumors overexpressing miR-939 have an increased risk of relapse  as  compared  with those with lower levels of miR-939 and lacking of lymph node involvement. During the formation of metastases, cancer cells acquire the ability to traverse the blood vessels to favor tumor invasion. In particular, cancer cells can release microvesicles (i.e. exosomes) to alter vessel permeability by the transfer of protein, soluble factors, RNAs, and miRNAs in endothelial cells. These cells express adhesion molecules like cadherin 5 (VE-cadherin) and zonula occludens (ZO-1) to form respectively adherens and tight junctions on the cell membrane, the loss of which has been shown to favor the migration of invasive cancer cells. We demonstrated in vitro a direct regulation of VE-cadherin by miR-939. Moreover, we found that TNBC cells actively release exosomes containing miR-939 that are taken up by endothelial cells and, once internalized, causes a decrease of VE-cadherin expression inducing the loss of cell-to-cell contact and the disruption of endothelial barrier that favor transmigration of cancer cells.

Since the secretion of miR-939 is sufficient to open gates between cells in tumor blood and lymphatic vessels that express VE-cadherin on their surface, we can speculate that miR-939 plays an important role in cancer dissemination and progression.