Since their development, vaccines have reduced the global burden of disease. Hepatitis C virus (HCV) causes persistent infection and is a leading cause of liver disease. To date, no vaccine is currently available, and treatment is costly and often results in side effects, limiting the number of patients who are treated. Despite recent advances in treatment, prevention remains the key to efficient control and elimination of this virus. Individuals who naturally recover from HCV infection develop a strong T-cell immune response (immunity provided by a subset of white blood cells) to the HCV non-structural (NS) antigens NS3, NS4, and NS5B. Hence, a vaccine that generates a robust T-cell immune response against the HCV proteins NS3, NS4, and NS5B may protect against infection.

Knowing which antigens to include in a vaccine is only half the battle, since, for a vaccine to be efficacious, it must target the antigens towards antigen presenting cells (APCs-another set of specialised white blood cells). APCs are essential to generate an immune response but require stimulation to create an inflammatory response. 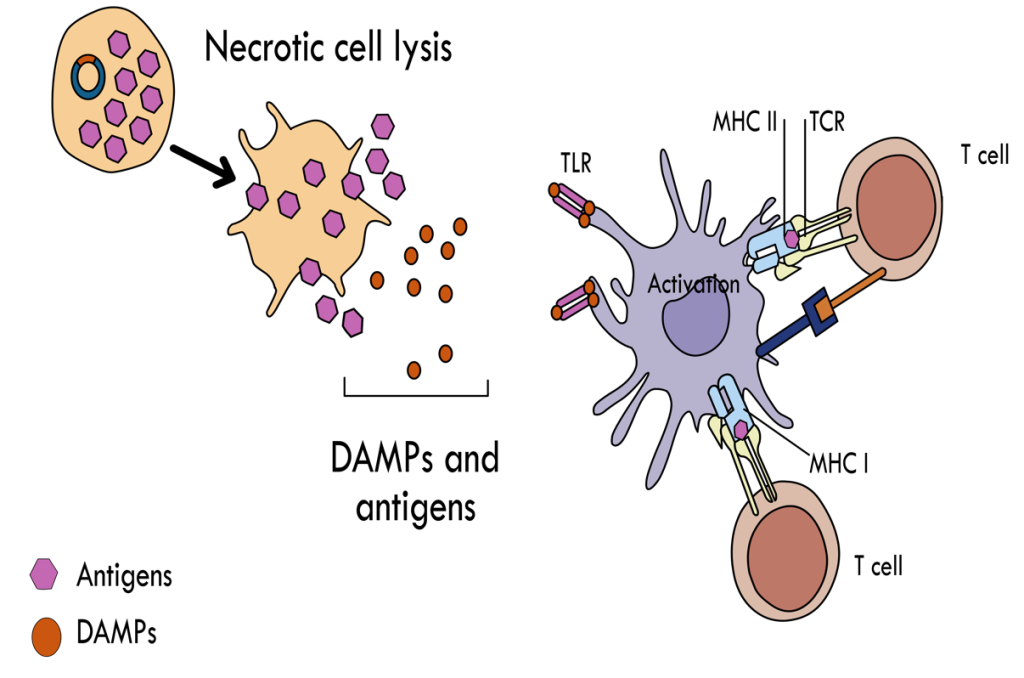 Mechanism of antigen presentation for generation of T-cell immune response following DNA vaccination
Plasmid DNA is taken up by somatic cells where antigen is expressed at high levels. The subsequent expression of a cytolytic protein results in necrosis in vaccine targeted cells and in release of a range of DAMPs as well as the HCV antigens. The DAMPs are taken up by APCs, after recognition by pattern recognition receptors (PRR) including toll-like receptors (TLR). The APCs become activated and induce an inflammatory immune response. These activated APCs also phagocytose the released antigens, which are cross-presented to the adaptive immune system triggering a T-cell immune response.

Typically, for vaccines to generate a robust immune response, they require other ingredients, such as aluminium salts, known as adjuvants in addition to the antigen. However, live attenuated vaccines (LAVs) do not require adjuvants as the weakened pathogen is still infectious, although the infection is rapidly resolved.  Nevertheless, LAVs are cytolytic and infection results in necrotic cell death (cell lysis). As a result, the viral antigens and an array of intracellular components, including damage associated molecular patterns (DAMPs) are released into the extracellular environment. DAMPs bind to receptors on APCs and, by functioning as natural adjuvants, provide the stimulation required for an inflammatory response that is in turn necessary to generate an effective immune response against the viral antigen. However, for safety reasons, an HCV LAV is unlikely to be developed.

A safe strategy for HCV vaccine development is to use DNA vaccine technology, which has the potential to generate robust T-cell immune responses. However, DNA vaccines are typically taken up by non-APCs, which are poor at inducing an immune response and require an adjuvant. A paper published in the Journal of Virology by Gummow et al. demonstrated an elegant way in which to increase antigen presentation and stimulation to these crucial APCs.

The DNA vaccine is taken up non-APCs where they then express high levels of the HCV antigens. In order to release the antigen into the extracellular environment for uptake by APCs, a gene that causes cell death is also encoded in the vaccine. Expression of this gene results in necrotic cell death. Thus, the extracellular antigen and the DAMPs are phagocytosed by APCs which then start the cascade which results in an immune response against the HCV antigens.

Thus, the rationale behind this study was to create a vaccine that mimics the effect of LAVs in order to generate robust T-cell immune responses. These promising results will pave the way towards the goal of an effective HCV vaccine.