A stone during pregnancy – more painful than childbirth

Kidney or ureter stones in pregnancy are a major health concern and are one of the most common causes for abdominal pain in pregnant women. Stones may lead to a blocked kidney, kidney infection which may spread to the whole body, and early labour which needs immediate hospital attendance and treatment for the expecting mother. 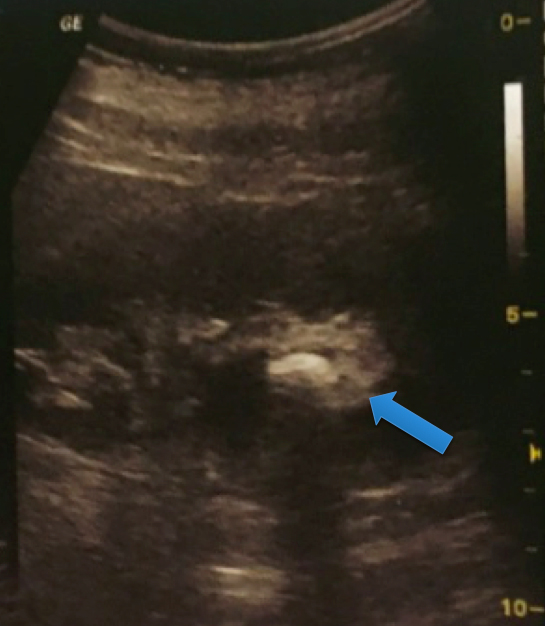 Painful stones occur in 1 of 3300 pregnancies. Women who had previously delivered another child are more commonly affected than those expecting their first child. Most women with stones experience problems in the 4th to 6th months of pregnancy.

Diagnosis
Ultrasound (US) is recommended to look for the causes of pain in pregnancy since it has no radiation and is harmless for the mother and the baby (Fig. 1). Generally, a computer tomography (CT) is used to find stones. However, in pregnancy this is avoided due to radiation which can harm the development of the baby. In special cases, a CT with a lower radiation dose can be used if ultrasound cannot provide a diagnosis.

Treatment
The pain caused by a stone has been described by patients as excruciating and “much worse than childbirth”. If an expectant mother presents with such pain to the hospital, usually a whole team of doctors get involved, such as the urologist, the obstetrician, the radiologist and sometimes the anesthesiologist if intensive pain control and/ or operative treatment are needed. At first, the pain will be controlled and fluids will be given through a needle in the arm veins because stone pain goes often along with nausea and vomiting leading to dehydration. The doctors will carefully evaluate which pain killers can safely be given without harming the baby. If there are signs of infection, it may be necessary to start antibiotic treatment. The doctors will choose carefully an antibiotic which is safe for the developing baby.

Surgical treatment
Other than in non-pregnant patients, the surgical treatment of stones in pregnancy will be evaluated very carefully and only suggested by doctors when unavoidable to prevent further complications potentially dangerous for mother and child. Surgical treatment may become necessary when pain is uncontrollable, when ongoing vomiting and fever endanger the pregnancy, or when the pregnancy is threatened by an early onset of labor. Women with a single kidney, with stones blocking both kidneys, or stones not likely to pass out spontaneously may be another group of patients needing surgical intervention.

When a kidney is blocked by a stone, it is important to open the outflow again to allow the kidney to function and not to get infected. This is usually done by the insertion of a thin plastic tube into the ureter (the pipe connecting the kidney with the bladder) which may bypass the stone and drain the kidney. Dependent on the duration of the remaining pregnancy, this may have to be changed once or a few times until the baby is delivered. Then the stone can be treated.

Another option can be to insert a tube through a little puncture in the flank into the blocked kidney. Generally, this is however not preferred by patients because of its inconvenience.

Nowadays, in women with stones but without infection, and being beyond the 3th month of pregnancy, stones may be treated there and then by passing a small optical instrument (URS) through natural openings onto the stone and breaking it up with a laser fiber.

The doctor will discuss with the patient which one is the most suitable option in a particular case keeping the health and safety of mother and child as a paramount concern in mind.

One Response to A stone during pregnancy – more painful than childbirth