A strategy to enhance the bioavailability of Rifabutin using Lipid Nanocarriers

Mycobacterium avium-intracellulare ( MAI ) or Mycobacterium avium complex ( MAC ) is the main pulmonary pathogen in patients with Chronic Obstructive Pulmonary Disease ( COPD ), patients with previously diagnosed tuberculosis and in AIDS patients. The treatment for MAC infection is lifelong, time-consuming, toxic and hard to tolerate, leading to patient non-compliance and treatment failure with devastating consequences. 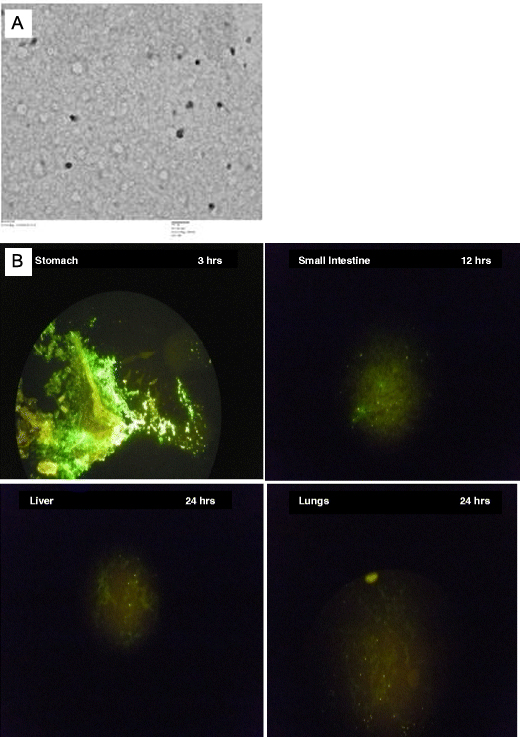 The performance and adverse effects of the drugs has been improved by encapsulating them in natural and synthetic polymers which serve as novel drug carriers. Oral delivery of drugs in solid lipid nanoparticles (SLNs) represent an alternative colloidal drug carrier system comprising biocompatible lipids. Oral administration of SLNs ensures delivery through the gastro-intestinal tract, transported via intestinal lymph directly into the systemic circulation, thus bypassing liver first pass metabolism.

For the nanoformulation, the drug RFB was  encapsulated in glycerylmonostearate (GMS) lipid by solvent diffusion evaporation method to form Rifabutin-Solid Lipid Nanoparticles (RFB-SLN). The nanoparticles so formed were  spherical with a smooth surface having a size of 345 ± 17.96 nm (Fig. 1A). X-ray Diffraction (XRD) studies revealed that majority of the drug RFB is entrapped inside SLN nanoparticles while some drug is adsorbed on the surface of nanoparticles. The nanoparticles were stable in simulated fluids (simulated gastric, intestinal and physiological buffer) under in vitro conditions for 24 h, 48 h and 7 days respectively. The GMS matrix is composed of a compact structure wherein its meshes do not allow flow of liquid phase, resulting in a slow drug release. As the drug is embedded into a solid lipid matrix, it not only reduces the exposure to enzymatic degradation during the process of absorption, but also offers a long contact time in vivo

When mice were fed RFB-SLNs orally, the therapeutic drug concentration was maintained in plasma for 4 days and in the tissues (lungs, liver and spleen) for 7 days. In comparison, orally-fed free drug RFB was cleared from plasma within 24 h.(Fig. 2A). The relative bioavailability of RFB from SLNs was fivefold higher as compared to administration with free RFB. The RFB-SLNs were distributed in all organs of the reticuloendothelial system (RES) namely lungs, liver and spleen and detected upto 7th day (Fig. 2B). The amount of drug found in any of tissues at any point was much above the MIC level (0.125µg/ml), especially in the tissues where infective microorganisms are predominantly present such as lungs (alveolar macrophages) and liver (liver macrophages). Thus, bactericidal concentration was maintained in targeted tissues up to 7 days.

The fate of SLNs in vivo on oral administration to mice was conducted using Coumarin-6 fluorescent labeled SLNs and visualizing the cryostat-sectioned tissues using a fluorescence microscope. Initially at 3hrs. a significant amount of particles were present as aggregates in the stomach. Subsequently at 12 hrs, 24 hrs and 72 hrs the particles were visualized in the small intestine, liver, lungs and spleen respectively (Fig. 1B). The advantage of using lipids as nanocarriers is that they tend to bypass the liver’s first pass metabolism and deposit in the tissues to remain there for a longer period and thereby cause a slow and sustained release of the drug.

The intent of using lipid nanocarriers is primarily to enhance the oral bioavailability of rifabutin (RFB) and eventually decrease the dose and dosing frequency for successful management of MAC infection.