The study of insect olfaction has been a hot topic in research for long time. No wonder! Small tiny fruit flies (Drosophila melanogaster) navigate through all your house and are able to detect that one orange in the kitchen which has the perfect conditions for laying eggs (Fig. 1). How do they do this? 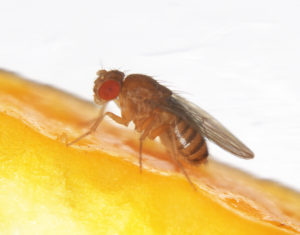 Insects detect odor molecules with specialized sensory neurons located in their antennae. These Olfactory Sensory Neurons (OSNs) express olfactory receptors in their cilia, which bind specific odor molecules converting chemical signals into electrical activity. There are 3 main types of olfactory receptors. One of them is responsible for detection of food sources, conspecifics and danger. These are the Odorant Receptors (ORs).

Insects ORs are constituted by the odor-binding subunit (OrX) which gives the specificity and a co-receptor named Orco. ORs are known to form ion channels allowing the flow of ions, including calcium (Ca2+), through the cell membrane. When an odor molecule binds to its specific OrX, the channel opens allowing the flow of ions into the cell (Fig. 2). The movement of Ca2+ ions can be monitored with calcium imaging techniques providing the researcher with a tool to investigate the functional properties of ORs.

One strategy to investigate ORs is the transfection of these into heterologous expressions systems such as Human Embryonic Kidney (HEK293) cells. This approach consists in functionally expressing foreign genes in eukaryotic cells. By doing so, it is possible to target the receptor protein and study it in detail by using pharmacology. The main problem of this technique in the case of insects ORs is the low insertion rate of the receptors into the plasma membrane.

There are Receptor Transporting Proteins (RTPs) which fulfill a chaperone and/or co-receptor function, promoting the correct insertion and functional expression of ORs. As an example, RTP1S has been proofed of special importance in mammals as an enhancer of ORs expression in OSNs. In insects, the Sensory Neuron Membrane Protein 1 (SNMP1) is an accessory protein of ORs necessary for the detection of cVA (11-cis-Vaccenyl Acetate), a fruit fly sex pheromone.

We were interested to know if the mouse RTP1S could support the correct trafficking and insertion of insect ORs when expressed in HEK cells.  Moreover, we wanted to investigate if SNMP1 could also play a role in OR complexes, or if it is only related to pheromone receptors.

To investigate this, we expressed Orco in HEK cells alone and together with each one of these accessory proteins. Responses to VUAA1 (Orco antagonist) were monitored by means of Ca2+ imaging.

Fig. 2. Sketch of a Drosophila melanogaster head. In the antennae we find hair-like structures called sensilla which houses the dendrites of Olfactory Sensory Neurons (OSNs). Insect Odorant Receptors (ORs), formed by the ligand-binding subunit OrX and the co-receptor Orco, are expressed in these dendrites. When the odor binds to the OrX subunit the channel is opened and allows the influx of calcium ions (Ca2+) into the cell.

As a result of our investigations we could show that even low amounts of RTP1S or the fly SNMP1 can enhance the responses obtained by low concentrations of transfected Drosophila Orco DNA. This means that co-expression of insect ORs with accessory interacting proteins can increase the insertion rate of the receptors into the plasma membrane in heterologous systems. This provides scientists with an inexpensive tool to further study the function of insects ORs. Furthermore, the fact that mammalian RTP proteins could enhance the expression of insects ORs points out that probably both systems have to face similar problems concerning the trafficking and insertion of receptors and that have find similar solutions to deal with it: accessory proteins.