Plants rely on roots for their supply of nutrients and water but not all roots are the same. Typically when asked to picture a plant root system we might think of the tap root with ‘lateral’ roots branching off this central, ‘primary’ root. However there is another whole class of roots which are also important for plant development and resilience. These are adventitious roots and they form from any other non-root tissue such as stems or leaves. This general definition separates adventitious roots from primary and lateral roots but within this general heading there is even more complexity as there are subgroups of adventitious roots formed both as a stress response and during normal development. A few examples are illustrated in Figure 1 and include roots that form on nodes of strawberry runners as part of normal development, roots that form on stems when plants are flooded and also include the roots that form on the base of cuttings such as used in nurseries to multiply plants. 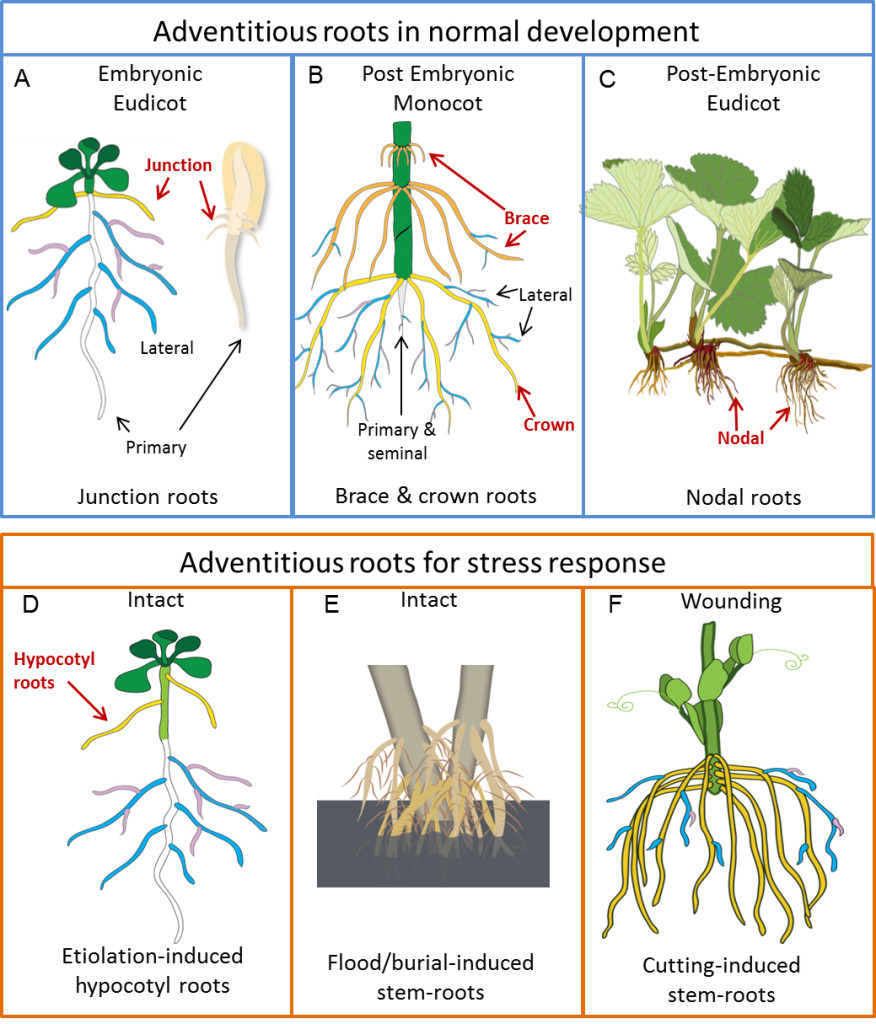 The reason that these diverse adventitious roots matter is that we are under pressure to grow more food with fewer inputs and with more extreme weather events. We are also under pressure to preserve biodiversity and protect endangered plant species; work which is often supported by extensive cutting propagation programs. Adventitious roots are involved in all of these cases.

Take cereal crops like wheat, maize and rice – each of these depend on nodal adventitious roots called crown roots for their nutrient uptake. The development and growth of these roots can respond to changing nutrient or water availability.

Propagation of elite varieties of fruit, forestry or ornamental plants is dependent on cutting propagation – which depends on adventitious root development on the cutting bases. This technique is also used for propagation of endangered species. A famous example of this is the Wollemi Pine which grew when dinosaurs roamed the planet. In 1994 only a handful of individual trees were found in an isolated valley of the Blue Mountains, Australia. Since then as a result of cutting propagation, the Wollemi is now grown in parks and gardens around the world.

There is now evidence that each of these adventitious root types is regulated in a different way. If we are to improve nutrient efficiency, or resilience to extreme weather events, then understanding precisely which root type we are studying and exactly how it differs from other adventitious roots is absolutely crucial. For this reason we highlight some of the key aspects of adventitious roots to which we should pay attention. We also use three more detailed case studies (flooding, nutrient responses and cutting propagation) to highlight some of the similarities and differences across these categories.

The Physiology of Adventitious Roots.
Steffens B, Rasmussen A
Plant Physiol. 2016 Feb