Patients: These were a 25-year-old gelding and a 23-year-old mare. The gelding was diagnosed with a Prototheca induced inflammation of the right nasal cavity (rhinitis). The mare was presented with inflammation of the right maxillary paranasal sinus (sinusitis) caused by a concurrent infection with Prototheca and Pithomyces chartarum. Clinical symptoms were unilateral nosebleed (gelding) and unilateral purulent nasal discharge (mare). 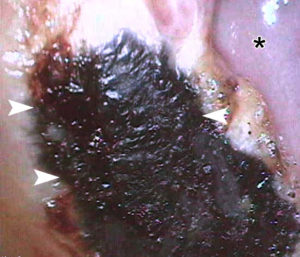 Fig. 1. Maxillary sinus of a 23-year-old equine patient with an algal (Prototheca) and mould (Pithomyces chartarum) induced infection. Depicted is an endoscopic image of the mucosa (asterisk) that is covered by a blackish plaque (arrowheads) indicative of a fungal infection.

How was the diagnosis reached? With an endoscope the nasal cavities and paranasal sinus were inspected. In the gelding a swelling of the mucosa within the right nasal cavity was observed. In the mare, the mucosa of the affected sinus was inflamed and covered by black material with a velvety surface indicative of mould growth (Fig. 1). To detect the cause for the tissue swelling and inflammation, samples of the altered mucosa (up to 0.7 x 0.4 x 0.4 cm) were collected for a microscopic examination.

By microscopy, in both patients an inflamed mucosa with intralesional algae was observed. In the mare, an additional mould infection was diagnosed (Fig. 2).

The algal and fungal structures were further characterized by laboratory tests. These included the detection of algal proteins (immunohistochemistry) and the identification of genomic sequences (molecular analysis). The final diagnosis was a Prototheca zopfii genotype 2 induced rhinitis in the gelding, and a Prototheca species and Pithomyces chartarum evoked maxillary sinusitis in the mare.

What is known about the causative agents? Algae are mostly associated with algal blooms in marine or freshwater systems. Moulds are multicellular fungi. Their growth is often connected with food spoilage or damp buildings. Prototheca species and Pithomyces chartarum, however, are widely distributed within the environment (soil, vegetation). Prototheca can even be present within the gut lumen or on the skin surface, and spores of Pithomyces chartarum may be inhaled.  Notably, despite frequent ways of exposure, tissue infection and associated clinical disease are seldom.

How can patients contract these rare diseases? Prototheca species and Pithomyces chartarum are so called opportunistic pathogens. That means they can only evoke clinical disease if the circumstances are favorable. Affected patients often have a defective immune system that cannot successfully defend these organisms. Other predisposing factors are the presence of wounded tissue or their environmental accumulation resulting in a high dose exposure.

The following factors may have facilitated the infection in these two aged horses. Older patients often have a decrease in their immunological capacity. The pasture of the mare was located close to a pasture with dairy cows and the most common protothecal disease is a chronic udder infection. Thus, it may be speculated that the mare was exposed to a contaminated environment. Further, 8 years ago the mare had a severe disease of the upper respiratory tract that required a surgical intervention with removal of parts of the nasal conchae. This may have resulted in a reduced local immune defence of the nasal cavity. 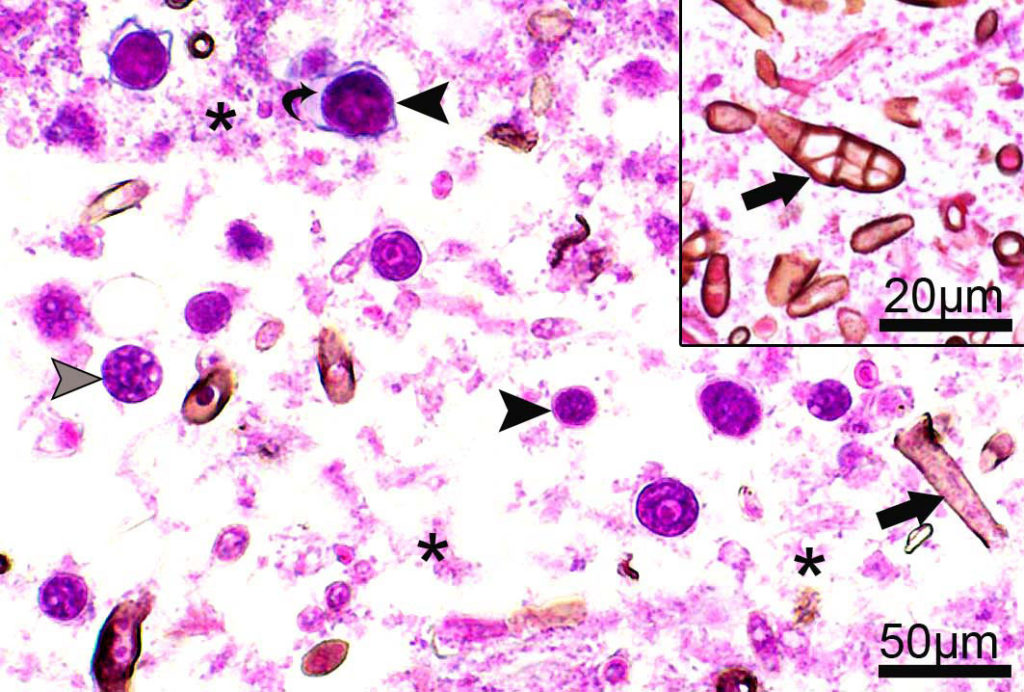 Relevance of the concise identification of the causative agents: The concise identification of the causative agents of a disease is important for selection of the optimal treatment and will help to eliminate sources of infection. Follow-up information (one year after disease diagnosis and subsequent treatment) was available for both equine patients. Both horses were in good body condition. The gelding showed only occasional mild nasal discharge and the mare did not have any respiratory symptoms.