Amino acid transporter chaperons its fusogenic partner: an essential role in placenta, and its implications for physiological and pathological cell fusion

Placenta is an essential organ for the fetal development of eutherian mammals. For the functions of placenta such as nutrient supply, gas exchange, metabolic waste elimination, and immunological protection, the maternal- and fetal blood circulations in the placenta must be closely located to each other, yet being physically separated. The key structure of placenta to fulfill such a requirement is the layer of epithelial syncytium (or multinucleated cell) called syncytiotrophoblasts. In the middle gestation period, syncytiotrophoblsts start to differentiate from the progenitor mononucleated chorionic trophoblasts by cell fusion, and establish the boundary between mother and fetus. Cell fusion is a biological process essential to construct our body. It is also involved in fertilization, skeletal muscle fiber formation, differentiation of osteoclasts, and so on. Meanwhile, cell fusion occurs under pathological conditions such as multinucleated giant cell formation upon viral infection. However, the molecules involved in cell fusion are not fully understood. 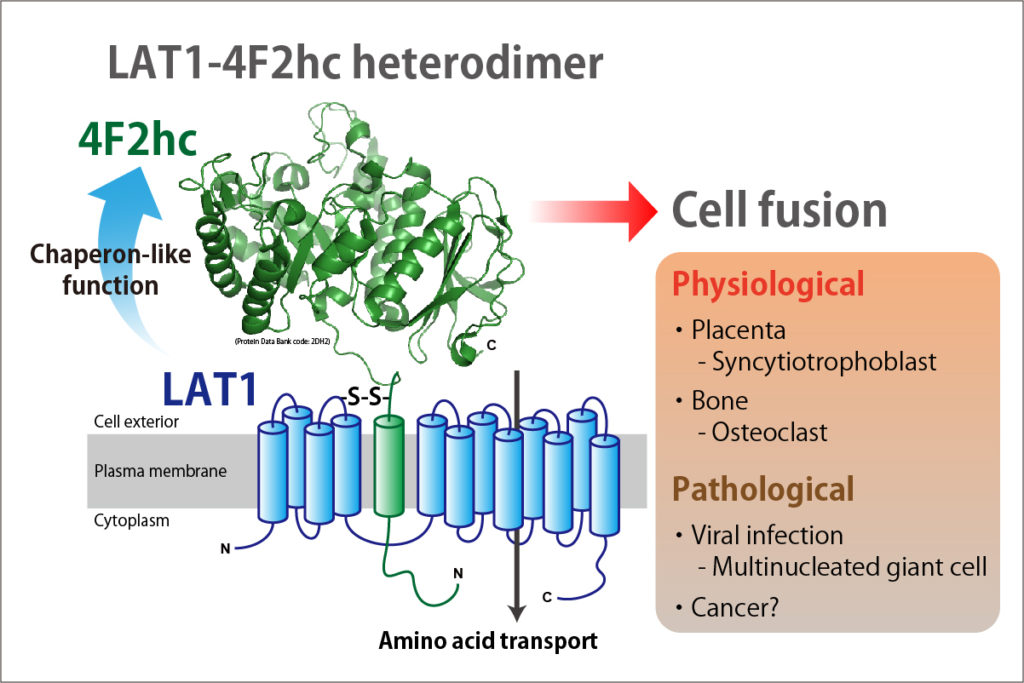 How does the amino acid transporter LAT1 play its role in cell fusion? We have found that the protein expression of 4F2hc, an ancillary protein of LAT1, is highly dependent on LAT1. 4F2hc is a single-membrane spanning glycoprotein which has been reported to be a regulator of cell fusions involved in viral infection and osteoclast formation. LAT1 and 4F2hc forms a heterodimer covalently linked by an extracellular disulfide bond. Even though it has been established that LAT1 requires the association with 4F2hc to be functionally expressed as an amino acid transporter, the significance of the interaction to support the expression of 4F2hc has not been denoted previously. We propose that LAT1 in chorionic trophoblasts escorts fusogenic 4F2hc to the plasma membrane via its chaperone-like function, thereby contributing to the syncytialization. The findings of our study also imply the presence of multi-molecular assembly which involves LAT1-4F2hc heterodimer and participates in both physiological and pathological cell fusions. How LAT1-4F2hc heterodimer and previously-reported fusion machinery components interact each other to coordinate their functions is still open to questions.

Speculating the further relationships between LAT1 and pathological cell fusion, it’s worth noting that LAT1 is, together with 4F2hc, highly upregulated in cancers from a various tissue origins. Furthermore, LAT1 expression correlates with the malignancy and poor prognosis in several cancers. Fusogenicity of cancer cells is now attracting an increasing attention as a proposed mechanism that endows cancer cells with genetic instability, thereby contributing to the progression of the disease. It is also suggested that fusion of cancer cells contributes to acquiring metastatic property and chemotherapy resistance. A tempting hypothesis would, thus, be that LAT1-4F2hc heterodimer contributes to the cancer progression not only by simply supplying amino acids to support cell growth, but also by promoting the pathological cell fusion that occurs inside of the cancer tissues.