Although any connection between HIV-1, the virus that causes AIDS, and Hutchinson-Gilford progeria syndrome, a rare genetic disorder that exhibits symptoms of accelerated aging in children, would appear unlikely, splicing of the latent ( i. e. dormant) HIV-1 genome during attempts to reactivate the virus to alert the immune system to its presence (i.e “the shock and kill approach”) is governed by the same splicing factors (ASF/SF2 and SRp55) whose activities leads to dysfunctional alternative splicing of the LMNA gene in Hutchinson-Gilford progeria syndrome. Because AMPK, a master metabolic regulator activated by many naturally-occurring compounds (e.g. resveratrol and beberine) as well as metformin, is necessary for T cell activation and thus reactivation of latent HIV-1 but also controls the activity of the splicing factor ASF/SF2 via upregulation of p32, AMPK activation will lead to a potential correction of alternative splicing in the LMNA gene and reactivation of latent HIV-1.  Strikingly, because normal humans produce the same mutant progerin protein as progeria patients via use of the same cryptic splice site in the LMNA gene, activation of AMPK will also lead to a decrease in progerin production in normal aging humans.  Moreover, rapamycin, a compound that has been shown to increase the lifespan of several animal model organisms, and sulforaphane, a naturally-occurring compound heavily concentrated in broccoli sprouts, have each been shown to increase clearance of the mutant progerin protein from the cell via autophagy (a system of disposing of damaged proteins in the cell). Because AMPK and p32 have each been shown to be essential, if not indispensable, for autophagy, activation of AMPK will not only reduce progerin production by altering alternative splicing in the LMNA gene, but also increase clearance of mutant progerin through induction of autophagy. 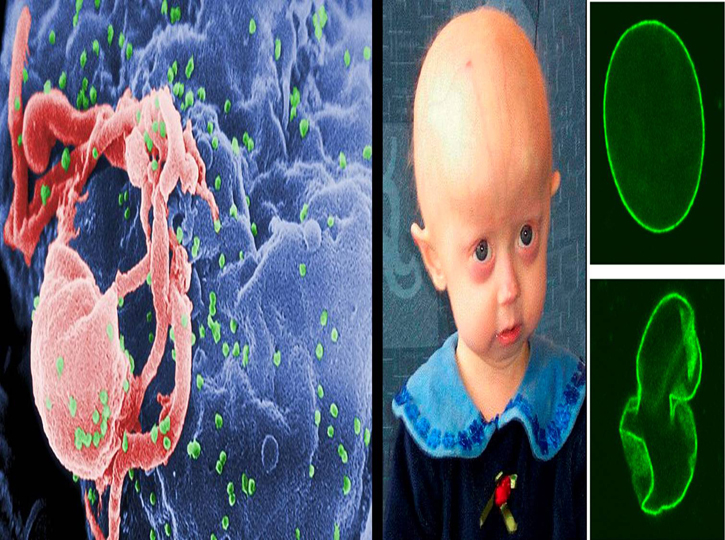 Indeed, similar compounds have been shown to both reactivate latent HIV-1 and prove efficacious in studies of progeria (e.g. farnesyltransferase inhibitors).  Considering that a wide range of compounds have also been shown to reactivate latent HIV-1 (e.g. proteasome inhibitors, theobroma cacao [cacao extract], etoposide, etc), it is likely that many of these compounds are converging on and activating AMPK through a common off-target mechanism of inducing cellular stress.

The identification of a common mechanism of action linking dysfunctional alternative splicing in progeria and the potential eradication of HIV-1 is unprecedented.  The identification of AMPK activation as a common off-target mechanism of action (via cellular stress induction) linking many disparate drug classes and naturally-occurring compounds is equally remarkable, potentially linking disease states as seemingly dissimilar as infertility, HIV-1, cancer, and Hutchinson-Gilford progeria syndrome.