The polyhydroxylated derivatives of 7-dehydro, 6-ketocholesterol  (Ecdysone, Ecdysteroids, Ecd) were accidentally discovered  in the search for an insect moulting hormone in 1965. The first Ecd compound, named  ecdysone (“ecdysis” = shedding off the cuticle), was isolated from  silkworm pupae.  It was defined as the insect moulting hormone secreted by the prothoracic glands (PG), in accordance with the currently recognised “brain-PG” hormonal theory.  Soon after the elucidation of  ecdysone,  there emerged numerous literature reports about the presence of these  insect hormones (Ecd) in many species of lower and higher plants.  Occasionally, as in the fern Polypodium, one  gram of the plant  yielded as much Ecd as did 500 kg of the silkworm pupae. 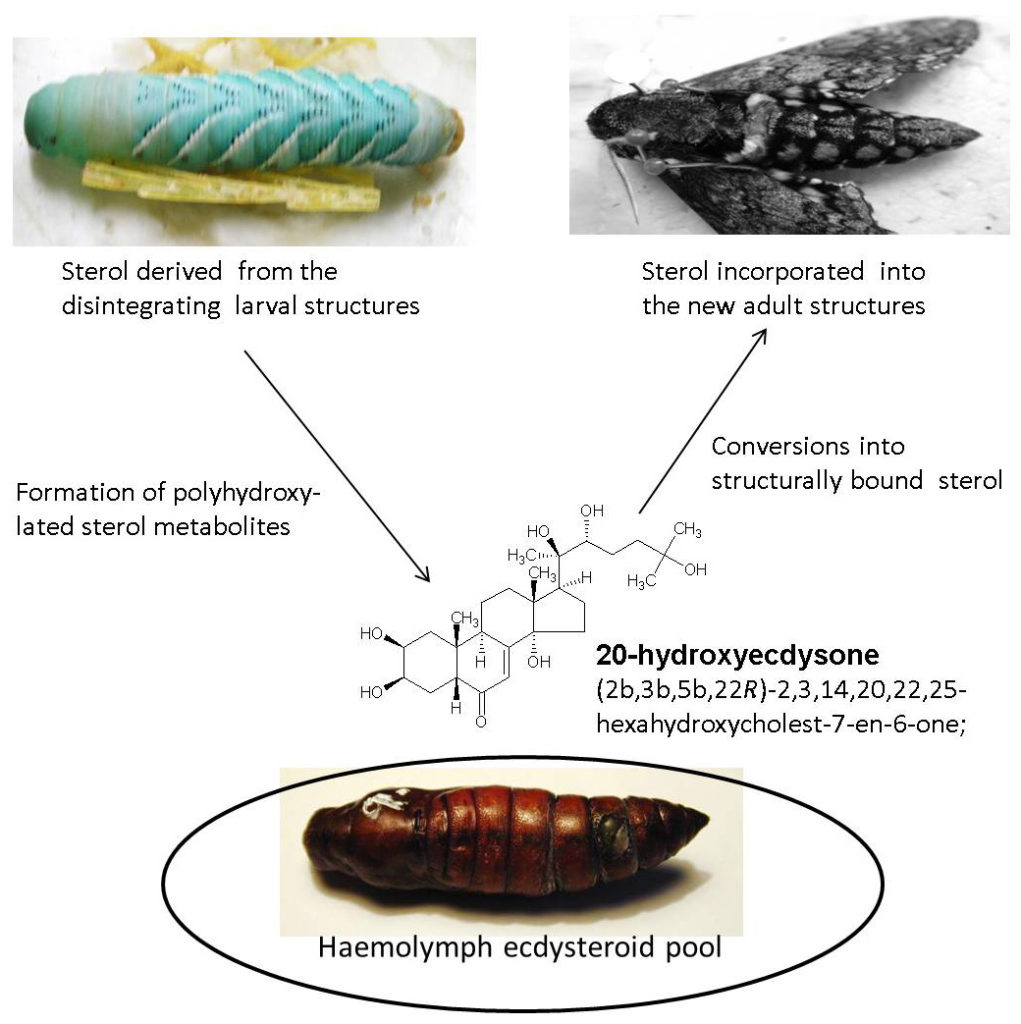 Fig. 1. Insects take sterol from plant and other food sources. During metamorphosis, the structurally bound sterol of the disintegrating larval tissues is reutilised. Hydrogen bonds are converted into hydroxylic groups and the partly water soluble, polyhydroxylated sterol (ecdysteroid) is reutilised for the construction of cell membranes in the proliferating, adult tissues.

During the past 60 years, the  brain-PG hormonal theory was abandoned  by its creator.  The removal of larval PG turned out to have no effect on the timing and succession of insect moults.  The  PG evidently served other physiological functions  than the release of a moulting hormone.  Moreover,  it was found that  Ecd could not be viewed as insect hormones, because  they were produced by multiple disintegrating  peripheral organs (see Figure 1).  Insects do  not synthesize the triterpenoid sterol nucleus. They  get it  from plants  or symbiotic bacteria.  Thus, the true biological  status of Ecd in insects is not a  hormone,  but an  essential vitamin.  In plants, the  partly water soluble,  “sterolic sugar-like” compounds  with 6 or 7 hydroxylic groups (Ecd), become synthesized during  the vegetation period of photosynthesis.  They get stored in the seeds or roots  as the reserve materials  for the initiation of  future vegetative seasons.  It was found, however,  that Ecd  do not function as phytohormones in plants.

The ontogenetic  development  of insects is  characterised by  endogenous peaks  in Ecd concentration. The peaks are always correlated with the most intensive histolysis-histogenesis transformations.  Artificial  injections  of Ecd before or after the endogenous  Ecd peaks cause dramatic,  pathophysiological  disturbances  of  the moulting  process.  These adverse and mostly lethal effects of Ecd  are generally known as the “hyperecdysonic” syndromes (see Figure 2).  We tried to avoid  these  syndromes by administration of relatively low dosages of Ecd, but did not suceed.  The partly polar Ecd do not penetrate the lipid-coated  integumental layers. We  tried  to bypass the lack of contact action by preparation of Ecd complexes conjugated to the bulky  porphyrin molecule.  We did not obtain the contact action,  but due to a slow metabolic  liberation of the biologically active Ecd from the porphyrin-Ecd  complex, we have achieved a more or less normal,  larval-pupal transformation, without the adverse hyperecdysonic syndromes. 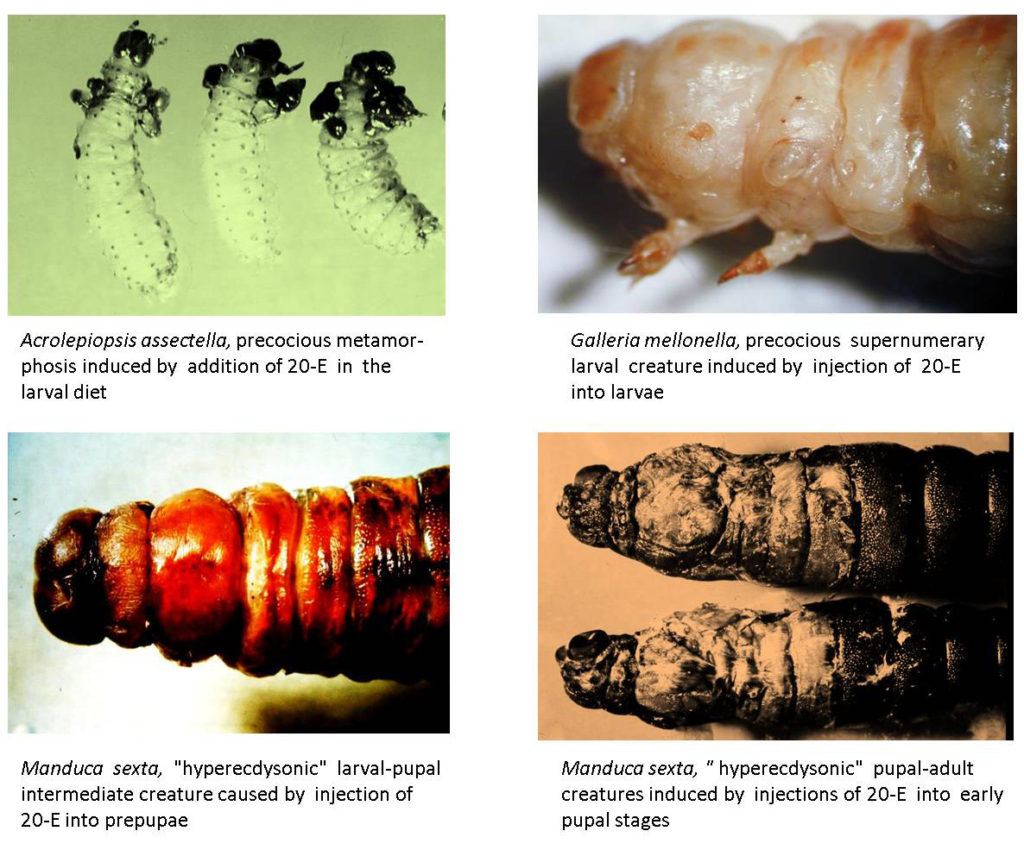 In  vertebrate animals,  Ecd generally exhibit  effects that are similar to the vitamin D3 (calciferol),  eventually combined with anabolic growth effects similar to the androgenic  steroid hormones. These conclusions can be documented  by the pronounced anabolic effects of Ecd in  domestic animals (rabbit, swine, cattle, sheep, Japanese quails).  In addition,  there exists a plethora  of  beneficial pharmacological  effects in the human body (increased growth of bone and muscles, improved physical and mental state, improved muscle  strength in athletes,  metabolic  stimulation,  tonic effects, neurogenic,  psychogenic, immunogenic,  antiallergenic, anti- stressoric, anti-cancerogenic  and many other more or less sufficiently  supported data).  A retrospective look at the history of vitamin D shows that the pioneers  working  on the elucidation of the rickets bone disease  observed long ago (during 1930-ies)  that the active compound was somehow related to 7-dehydrocholesterol,  which could be  converted from other sterols by UV-irradiation.  They looked for the antirachitic  vitamin D among the purely lipophilic  fish oils and animal fat.

I am convinced that  Ecd represent a previously overlooked,  special group of the amphoteric,  both partly lipid and partly water soluble class of the esential vitamin D.  Ecd possess  the  7-dehydrocholesterol  unsaturation,  which is stabilised  by the conjugated  6-keto group.  In contrast to the so far known precursors of calciferol (vitamin D3),  which require  activation by ultraviolet  radiation  and metabolic  incorporation of  3 additional hydroxylic groups in the liver,  the  Ecd type of vitamin D6 (6 comes from the latin “Hexapoda” = insects)  contains not only 3, but 6 or 7  prefabricated  hydroxylic groups.

There are sufficient data which show that Ecd (Vitamin D6) can stimulate regeneration and tissue growth or enhance metabolic rates  in insects, mammals  and also  in humans.  Unfortunately,  due to  the limited supply of pure Ecd compounds, there are still limited pharmacological  data on avitaminosis  due to the lack of the vitamin  D6.  It is difficult to cure avitaminosis if you do not know or do not have the responsible vitamin.  I have a feeling, however,  that  the defficiency of vitamin  D6 (Ecd) could be behind  the hitherto  incurable  diseases, especially those related to impaired regeneration,  aberrant  cell growth or  disturbed neuromuscular functions.  Investigations along these lines  have  been persistently hindered by an errant belief in  the moulting  hormones of insects.