Over the past two decades, evidence of a pathogenic relevance of autoimmunity in human heart disease has increased significantly. A central role for autoimmunity in a significant proportion of dilated cardiomyopathy (DCM) patients is supported by the presence of autoantibodies in the blood of affected patients. 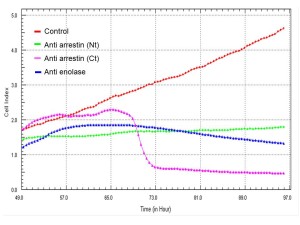 A number of antibodies against various cardiac proteins were identified in cardiac immune diseases, which can be divided into a) sarcolemma proteins (e.g., myosin, actin, troponin and tropomyosin), b) mitochondrial enzymes (e.g., the ADP-ATP carrier, nicotinamide adenine dehydrogenase, ubiquinol-cytochrome C reductase, lipoamide dehydrogenase and pyruvate dehydrogenase), c) heat shock proteins (e.g. hsp70, hsp60 and Hsc70) and d) cardiac muscle receptors such as β1- adrenergic and muscarinic receptors. Among them, the pathogenic role of autoantibodies against β1- adrenergic receptor has been well studied in experimental models.

Recently, we suggested the presence of other cardiac autoantigens that forms complexes composing cardiac arrestin like proteins and enolase. Arrestins play a central role in desensitization of G-protein-coupled receptors (GPCRs). Enolase is a glycolytic cytoplasmic enzyme, known to be a multifunctional. In in vitro studies, α-enolase was found necessary for regeneration of normal and dystrophic skeletal muscles. 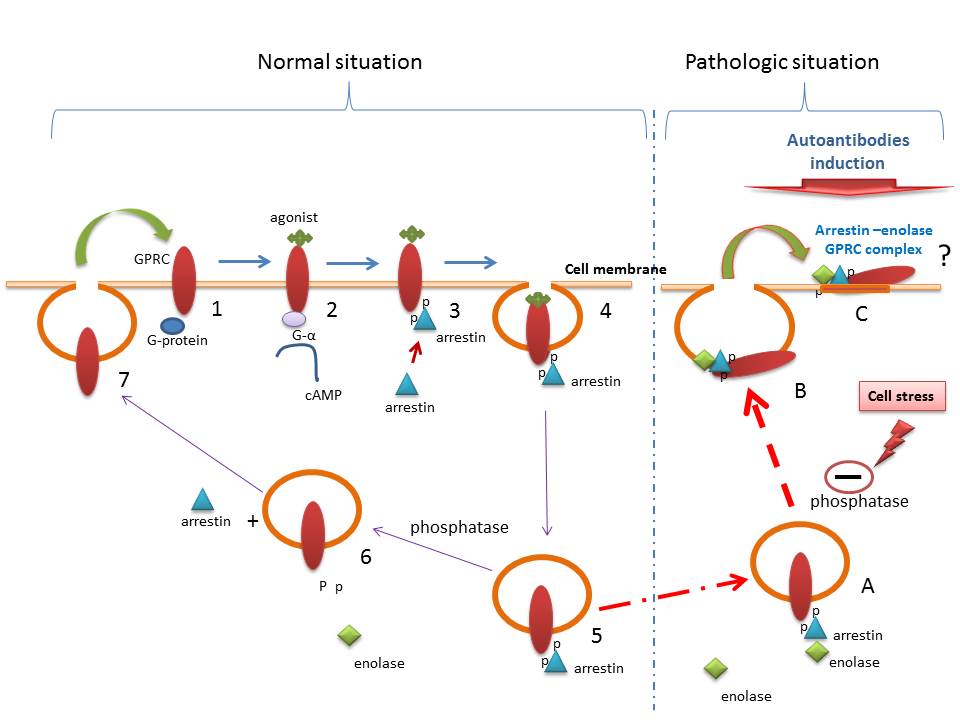 Fig. 2. A schema to describe pathologic events influences by arrestin-enolase complex. In normal situation, following agonist association/interaction with GPCRs (1-7), and the phosphorylation that ensues (3), arrestin couples with the phosphorylated amino acid residues (3). As a result the complex of receptor-agonist internalization (4) and then the receptor detaches from arrestin by phosphatase action (4, 5) and the freed receptor, along with a fragment of the membrane, returns and fuses with the cell membranes (6, 7). The phosphatase activity may undergo diminution under pathological conditions (A), in which case the epitopes linking the arrestin-enolase couple is externalized (B). The present data suggest that arrestin like proteins can associate with α-enolase and this pair can appear on the surface of the cell membranes as an autoantigen (C).

In our study, first, we demonstrated that arrestin like proteins (ALP) were presented in the 4 regions of the heart. When we purified this protein via several methods such as ACA-34 gel filtration chromatography or by adsorption on the specific monoclonal antibody to ALP, in both methods, this protein co-purified with α-enolase. Curiously, the antibodies against arrestin and enolase inhibit cardiomyocyte cell proliferation (Fig. 1) analyzed by a real time cell culture apparatus (xCelligence) in vitro. In parallel, autoantibodies against arrestins and enolases were detected in patients with infarcted heart disease (3.7% for arrestin and 9.12% for enolase). These results point out that auto antigen are detectable by ELISA in human cardiac diseases. The present data suggest that arrestin like proteins can associate with α-enolase and this pair can appear on the surface of the cell membranes as auto antigen (Fig. 2). This association may influence the signal transduction by membrane GPCRs as well as the glycolytic pathway in cardiac muscles.

Co-purification of arrestin like proteins with alpha-enolase from bovine myocardial tissues and the possible role in heart diseases as an autoantigen.
Mirshahi M, Le Marchand S
Biochem Biophys Res Commun. 2015 May 8