Evaluating the level of consciousness is one of the initial, important and basic assessments of patients and it can be challenging even for experienced physicians. Various scoring systems have been defined that can be helpful in predicting patients’ outcome by evaluating their level of consciousness. Glasgow coma scale (GCS) is the most commonly used approach in this regard. However, this scoring system has limitations including the variability of inter-rater reliability, predictive validity, inability to evaluate the verbal part of this measure for endotracheally intubated patients and the inability to detect small changes in neurological condition. New scoring systems have been produced in recent years to compensate for these limitations. One of these systems is called Full Outline of Unresponsiveness (FOUR) score which evaluates 4 components including visual response, motor response, brainstem reflexes and the respiratory pattern. Compared to GCS, the verbal component is removed and evaluation of brainstem reflexes and respiratory pattern are added to FOUR. Although the predictive value of this scale has been proven in various studies, there are few articles on multiple trauma patients especially in the emergency department. Therefore, this study aimed to compare the predictive value of GCS and FOUR score on the outcome of patients with multiple trauma admitted to the emergency department. 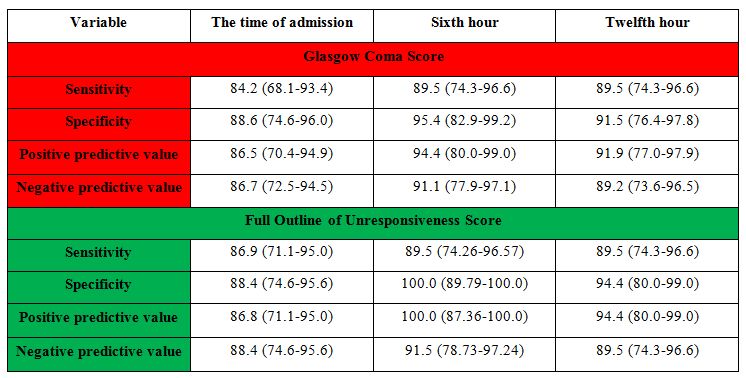 In the present study, all non-sedated multiple trauma patients with decreased level of consciousness admitted to the emergency department were studied. Patients who had decreased level of consciousness for non-traumatic causes (hypoglycemia, receiving sedative drugs, drug poisoning), who had hemodynamic instability (systolic blood pressure below 90 mmHg), and who died in the emergency department within 12 hours were excluded from the study. Patients’ or their guardians’ lack of consent to participate in the study was another exclusion criterion. In the present study, there were no limitations in terms of age and gender. In-hospital mortality, clinical diagnosis of brain death, motor disability and full recovery without any sequelae at the time of discharge were studied over a month of evaluation.

The findings indicate that the predictive value of FOUR score and GCS in predicting the outcome of multiple trauma patients admitted to the emergency department is similar. Evaluation of these two methods at the sixth and twelfth hours after admission has a better predictive value of than at the time of admission.