A unilateral vestibular lesion (UVL), typically due to acute vestibular neuritis, induces vertigo, imbalance, asymmetry of the vestibule-ocular reflex (VOR) and problems with the perception of self motion. This study examined the question of whether the disruption of self-motion perception recovers differently compared with the VOR after UVL Dissociation between motion perception and VOR has been observed in normal subjects in response to long lasting repetitive asymmetric rotation: motion perception gradually diminishes during slow rotation and increases during fast rotation while the VOR shows the opposite adaptive mechanism (Pettorossi et al 2013). We also examined whether disruption of motion perception or reflex (VOR) function in UVL relates best to the discomfort and handicap of patients long term, as evaluated by the Dizziness Handicap Inventory (DHI). 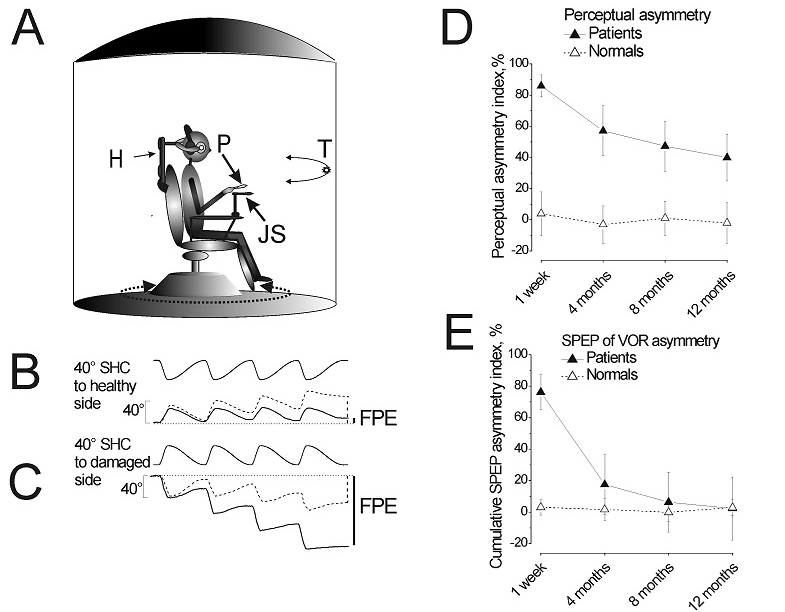 Fig. 1. Experimental setting and motion perception recording. A: Schematic drawing of the experimental setting. Acoustically isolated cabin and rotating chair: P: pointer or JS: joystick (when used), T: visual target, presented just before the rotation in the dark, H: head holder. B, C: Motion perception tracking in response to opposite directed series of four asymmetric cycles with slow half cycle (Slow HC) to healthy side (B) and Slow HC to lesion side (C). Traces above: asymmetric rotation and below: motion tracking during rotation (solid line: UVL patient, dashed line: controls). FPE at the end of rotation is indicated by vertical bars on the right (solid line: UVL patient; dashed line: controls). Note that FPE of UVL patients was smaller in B and greater in C than that of controls. (D,E) Asymmetry index of self-motion perception in VN patients (closed triangles) and 10 control subjects (open triangles)(D) and .asymmetry index of the cumulative slow phase eye position (SPEP) (closed triangles: patients, open triangles: controls) after the acute unilateral vestibular lesion (UVL) The asymmetry index was computed considering the final target representation error (FPE) (D) or the final slow phase eye position (SPEP) error (E) in response to opposite directed asymmetric rotation. Note that the asymmetry index of VOR markedly decreases during the compensatory period, while the motion perception asymmetry persists high up to 12 months from the acute episode.

We studied 30 patients with vestibular neuritis acutely and up to 12 months follow up. Vestibularly mediated self-motion perception was assessed by measuring the error in reproducing the position of a remembered visual target at the end of 4 cycles of asymmetric whole-body rotation (Fig. 1); a technique useful for dissociating perceptual and reflex responses (Pettorossi et al 2013). The oscillatory stimulus consisted of a sequence of slow (0.09Hz) and fast (0.38Hz) sinusoidal half cycles which, in normal subjects, induces considerable underestimation of  the final target position (final position error = FPE displaced toward the side of slow rotation). This normal FPE is due to the intrinsic characteristic of the vestibular properties and to an additional adaptive process (Pettorossi et al 2013).  In contrast the cumulative slow phase eye position (SPEP) of the VOR is only minimally displaced in response to asymmetric rotation (Fig. 1). In UVL patients the perceptual error was very large when the slow half cycle was delivered towards the lesion side, but minimal towards the healthy side. The asymmetry of the error diminished over time due to central compensatory mechanisms but it remained abnormally large at 12 months (Fig. 1). In contrast, SPEP of VOR showed an initial large asymmetry, but, during the compensatory period was reduced to nil in most patients. Normalization also occurred for conventional reflex vestibular measures (caloric tests, subjective visual vertical and head shaking nystagmus). At 1 week there was a good correlation between the degree of motion perception asymmetry and that of the reflex responses, but at 12 months about half of patients showed persistent asymmetry in motion perception in spite of good VOR recovery.  A third of patients showed good recovery of both perception and VOR and the remaining patients showed poor recovery of both VOR and motion perception. Interestingly, vestibular-related handicap, measured with the DHI at 12 months, correlated with self-motion perception asymmetry but not with abnormalities in vestibulo-ocular function (Fig. 2). 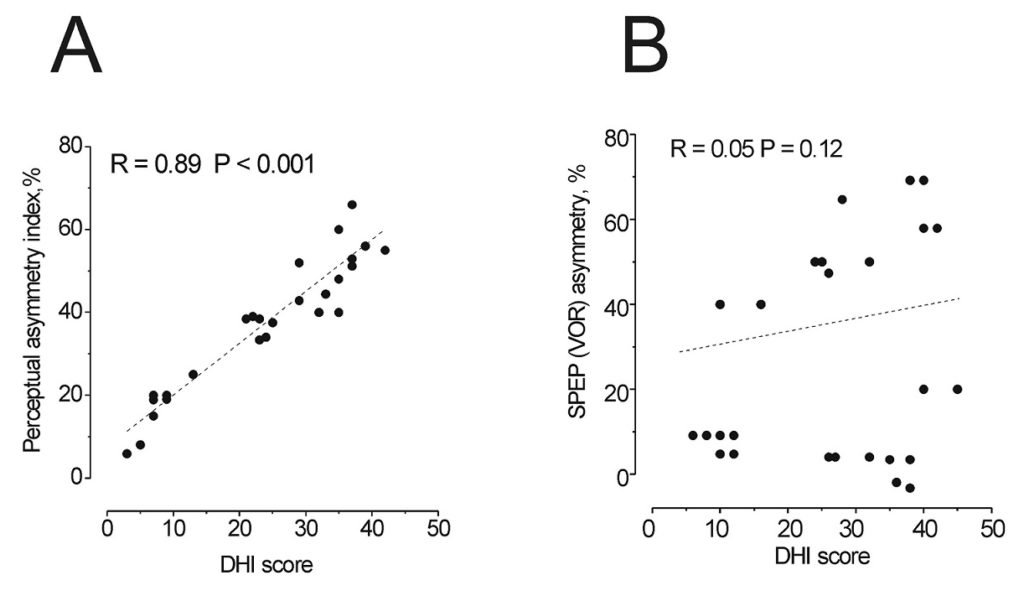 Fig. 2. Correlation of perceptual and VOR asymmetries with DHI score at 12 months. The correlation is illustrated between DHI score and motion perception (A) or SPEP of VOR (B) asymmetry index after opposite directed asymmetric stimulation. Correlation coefficient (R) and probability (P)