We have previously shown that hsa-miR-520d-5p can convert cancer cells into induced pluripotent stem cells (iPSCs) or mesenchymal stem cells (MSCs) via the demethylation and consequent upregulation of TP53 in vivo. We have also reported that miR-520d-5p has no tumorigenic effect, DNA repair effect and reprograming to MSCs (anti-aging effect) on human normal cells, including fibroblasts. 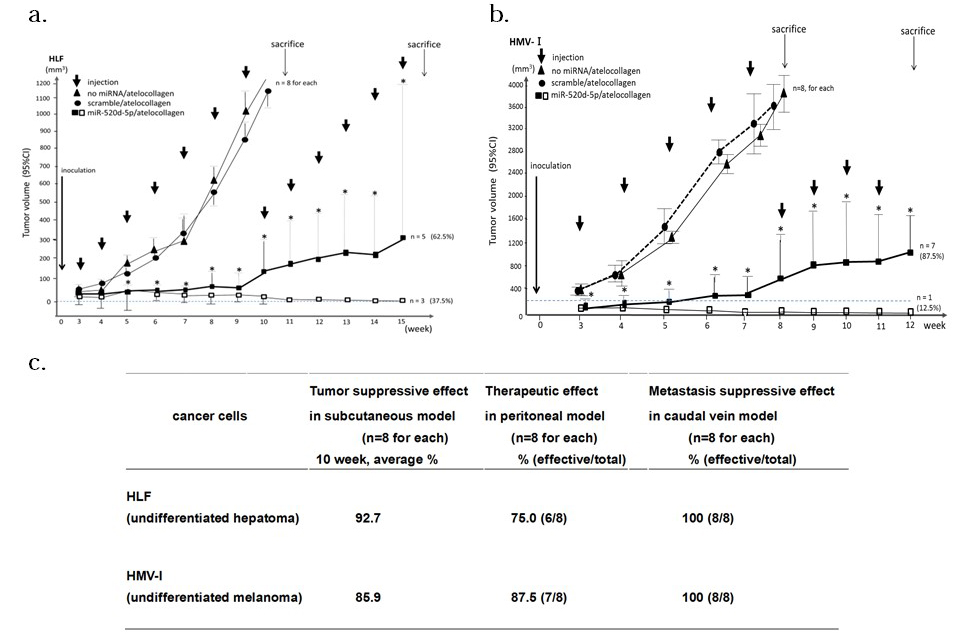 Fig. 1. a, b : After we generated GFP-expressing HLF (HLF/GFP) or HMV-I (HMV-I/GFP) cells using lentiviral constructs (left for each), the therapeutic effects of 520d/atelocollagen on the resulting GFP-expressing tumors in mice were examined. Dotted lines indicate tumor growth in controls. Overviews of the in vivo study using 520d/atelocollagen in a mouse xenograft model (top, HLF; bottom, HMV-I). In the group that was administered the 520d/atelocollagen complex, tumor volume was significantly suppressed relative to the control group.

We performed an in vivo study using 520d-5p-conjugated atelocollagen (520d/atelocollagen) to assess the anti-cancer effects and the therapeutic effects on cancer tissues using GFP-expressing two cell lines [undifferentiated hepatoma (HLF) or melanoma cells (HMV-I)]. The 520d/atelocollagen complex was injected into immunodeficient mice topically, intraperitoneally or systemically. After subcutaneously inoculating HLF or HMV-I into nude mice (5 x 107 cells) and allowing the tumor to develop to 5 to 8 mm in size, 520d/atelocollagen was injected into the tumor once per week (n = 8 for each cell line). This analysis revealed that 62.5 % (5/8) (Fig 1a) of HLF tumors and 87.5 % (7/8) (Fig. 1b) of HMV-I tumors were significantly suppressed, whereas 37.5 % (3/8) of HLF tumors (Fig. 1a) and 12.5 % (1/8) of HMV-I cells (Fig. 1b) disappeared. The tumors that eventually disappeared were observed for 12 weeks. During that time and in the absence of 520d/atelocollagen injections, we did not detect any recurrent tumors. Among HLF tumors, the average suppression rates of tumor size in the subcutaneous, intraperitoneal and systemic (metastasis) models were 92.7 %, 75.0 % (6/8) and 100 % (8/8), respectively (Fig. 1c). An average of 85.9 %, 87.5 % (7/8) and 100 % (8/8) of HMV-I tumors exhibited tumor size suppression in the subcutaneous, intraperitoneal and metastasis models, respectively (Fig. 1c). The suppressive effect of miR-520d-5p on subcutaneous tumors and metastasis was calculated based on the data collected each week or the findings at the time of sacrifice. 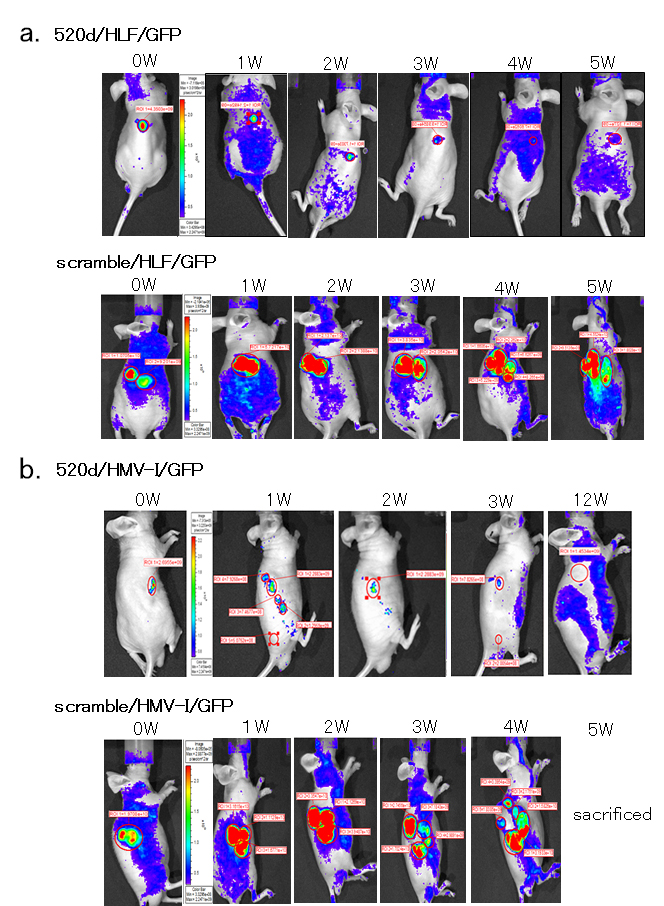 Fig. 2. a : A representative image of the therapeutic effect of 520d-5p/atelocollagen using an in vivo imaging system. At each inoculation site, 37.5 % (3/8) of the tumors disappeared. The growth of tumors that received 520d-5p was significantly suppressed, and metastatic ability was entirely inhibited in the remaining mice. A time course (top) of 520d/HLF/GFP cells (520d-5p-transfected and GFP-expressing HLF) is depicted. Representative sequential images (bottom) of scrambled/HLF/GFP cells (scrambled-transfected GFP-expressing HLF).
b : In HMV-I tumors, 12.5 % (1/8) of the tumors disappeared. After treatment with 520d-5p, the growth of other tumors was significantly suppressed, and their metastatic ability was entirely inhibited. 520d/HMV-I/GFP and scrambled/HMV-I/GFP indicate 520d-5p-transfected, GFP-expressing HMV-I (bottom), respectively.

The therapeutic effect of 520d-5p on subcutaneously inoculated tumors was evaluated based on the intensity of the GFP signal using an in vivo imaging system. Among the GFP-expressing HLF cells (520d/HLF/GFP) or HMV-I cells (520d/HMV-I/GFP) that received 520d-5p, 37.5 % (3/8) or 12.5 % (1/8) exhibited a gradual decrease in the signal, followed by disappearance of the signal in the 5th week (representative data are shown in Fig. 2a or 2b top, respectively), whereas GFP-expressing HLF cells or HMV-I cells that received a scrambled construct (scrambled/HLF/GFP or scrambled/HMV-I/GFP) exhibited an increase in the GFP signal accompanied by gradual growth (representative data are shown in Fig. 2a or 2b bottom, respectively).

In addition, adverse effects and toxicity were assessed in this study. For the period of 6 months when the mice or tumor-inoculated mice were observed, their normal activities were maintained without weight loss or anorexia. The mice did not experience any toxic reaction (such as vascular embolism) in response to the infusion of atelocollagen.

Atelocollagen prevents immune-stimulatory adverse effects, and 520d-5p suppresses immunoreaction by downregulating AICDA. These properties may be involved in the phenomenon observed in this study. We postulate that a possible mechanism underlying tumor-suppressing effect by 520d-5p can be TP53 upregulation induced by downregulation of MYST1 which is implicated in methylation process. Because MYST1 are indirectly downregulated by 520d-5p upregulation, we are attempting to prove the detail mechanisms.

520d/atelocollagen can be a feasible therapeutic agent with anti-cancer and anti-metastatic effects, although it performs a small size of tumor tissues or circulating tumor cells most effectively, due to the penetrance of atelocollagen into tumor cells. Thus, because the efficiency of the introduction of such conjugating materials into a target cell or target tissue remains unclear, further careful investigation using non-rodent is needed before the application of this therapy in humans.