Over the past 50 years, the average global temperature has increased at the fastest rate in recorded history, thus affecting the production of many crops, including wine grapes. Indeed, global warming uncouples technological and phenolic maturity of grapes, which, combined with berry dehydration, results in high sugar content of berries at harvest, despite harvest timing has also been pushed back. This excess sugar is converted to alcohol by the yeast Saccharomyces cerevisiae during wine fermentation, and may negatively impact wine quality, public health, and international wine trade. 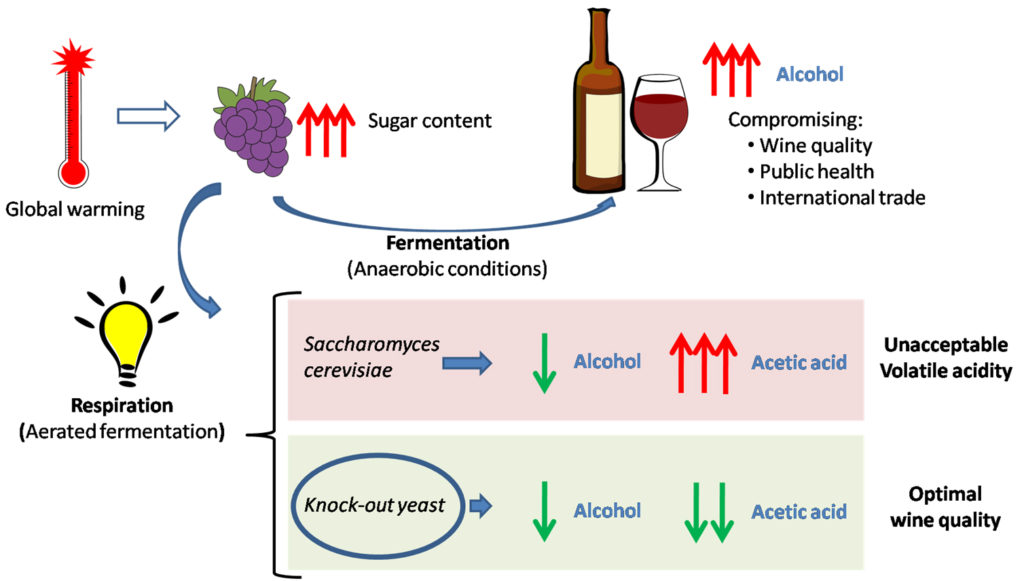 A way to address this problem is diverting part of the sugar from alcohol production, always avoiding residual sugars, which are undesirable in most wine styles. And this can be achieved by making yeasts partially respire sugars, instead of developing pure fermentative metabolism. This requires supplying air during wine fermentation. The advantage is the final products of respiration are just water and CO2. Trying to implement this idea we found two main hurdles. The first one was to be expected, since S. cerevisiae and other yeasts (known as Crabtree-positive) prefer fermentation, and almost completely avoid respiration when sugar availability is high, as happens in grape must. This is known as the Crabtree effect, first described by Crabtree H. in 1929, working with tumor cells, and later observed in several other cell types. The second drawback was not so expected, it was found that S. cerevisiae produces huge amounts of acetic acid when fermenting in the presence of air, resulting in wine spoilage due to unacceptable volatile acidity. 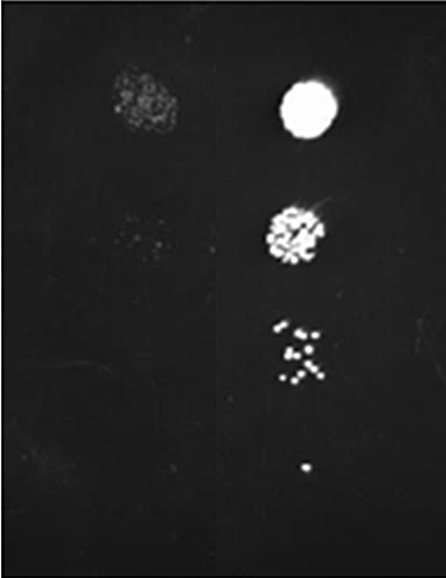 Fig. 2. Growth in galactose+2-deoxyglucose medium of a REG1defective strain (right column) as compared to a wild type strain (left column). Each row is a 1/10 dilution of the row above it.

Almost by serendipity, we recently found a solution to volatile acidity, while trying to develop a solution to the Crabtree problem in S. cerevisiae. Based on previous reports and the screening of a collection of thousands of yeast knock-out mutants (one different gene deleted for each strain), we constructed several recombinant wine yeast strains. Unexpectedly, despite the Crabtree effect, aeration resulted in 25% reduction in ethanol production, which would be enough to solve the problems derived from climate change. However, alcohol production was quite similar for all these yeast strains. Even more interesting, the volatile acidity produced by some of these yeast strains was similarly low under standard or aerated conditions. We also spotted interesting changes in other volatile compounds and on glycerol production.

The bad news is these recombinant strains would hardly find their way into the winemaking market. The good news is the most interesting genetic modification can be easily obtained by a non-GMO approach, since yeasts lacking the activity of the REG1 gene (among the most interesting from this study) can grow in specific culture media (galactose+2-deoxyglucose as carbon sources), while normal strains would not (Fig. 2).