Hydrogen could fuel the future! Together with oxygen, hydrogen can be converted to electricity with only water as an exhaust product. The conversion from hydrogen to electricity is done in fuel cells, which require a platinum catalyst. However, platinum is expensive and, because it reacts with both hydrogen and oxygen, these gasses have to be separated by bulky membranes in the fuel cell (Fig. 1, left). 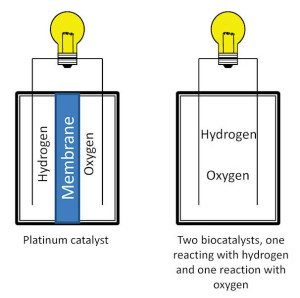 Hydrogen is also used as a fuel by many micro-organisms, which make a special biocatalyst called hydrogenase. These biocatalysts can replace platinum in hydrogen fuel cell. Hydrogenases hardly react with oxygen and a fuel cell based on hydrogenase does not need a membrane to separate the gasses (Fig. 1, right). A big drawback, however, is that oxygen causes breakdown of hydrogenase

In two scientific papers, research groups in Leeds and Berlin have shown that some hydrogenases have a unique approach to prevent damage by oxygen. In the first approach, multiple hydrogenases are coupled together. This allows one hydrogenase to ‘rescue’ a second one. In order to do this, the first hydrogenase sacrifices a tiny bit of the electricity to help the second hydrogenase that is attacked by oxygen. The second approach becomes important when there is no hydrogen to rescue the hydrogenases. In this situation, hydrogenases have evolved to switch off the catalytic sites temporarily. Although hydrogen, which is not present anyway, cannot be converted in this state, damage by oxygen is also prevented. Hydrogenases then switch back on again when hydrogen is replenished in the micro-organism of fuel cell.