Depletion of crude oil reserves alongside rapid climate change due to greenhouse gas emissions (GHG) have led scientific community to seek alternative energy sources. Renewable energy sources such as 2nd generation biofuels have garnered a lot of interest with bioethanol leading the way. Bioethanol, also known as lignocellulosic ethanol, is considered to play a key role due to its capability to alleviate GHG emissions, reduce fossil fuels dependency, and eradicate biofuels competition with food and feed industry.

Lignocellulosic materials, such as agricultural residues, forest residues, and energy crops, being low-cost and abundant, provide an attractive feedstock for the production of bioethanol and other bio-based products in the frame of the biorefinery concept. However, the great challenge is to efficiently convert these waste materials into fermentable sugars that would serve as feedstock for the subsequent alcoholic fermentation by ethanol producing microorganisms, such as the famous yeast for its use in bread and wine making, Saccharomyces cerevisiae.  The main barrier to this end is the plant cell wall. Plants’ defense system, designed to withstand several attacking microorganisms, constitutes a major bottleneck to the bioethanol production process. 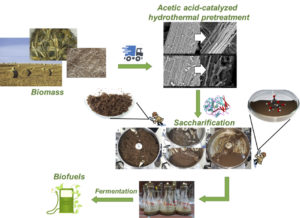 Therefore, a two-step process is being used in order to overcome the complexity and recalcitrance of lignocellulosic biomass. Pretreatment, as the first step, aims in disrupting the complex polysaccharide network of the plant cell wall, rendering cellulose vulnerable to the second step, which is known as enzymatic saccharification. During enzymatic saccharification, polysaccharides such as cellulose and hemicellulose are converted to fermentable sugars by lignocellulolytic enzymes. However, merely the release of sugars from lignocellulosic biomass seems not to suffice in order to design a successful ethanol production process. What is of importance is high final ethanol concentrations (>4 %, w/w), which lead to a drop of distillation costs. In order to accomplish that, a highly concentrated sugar feedstock is required by using high initial solids content during enzymatic saccharification. Operating at such conditions poses new hindrances in the way. Part of the problem stems from poor mass-transfer conditions generated at high solids loadings due to insufficient stirring, resulting in reduced sugar yields. Alternative stirring techniques, such as gravimetric mixing, alongside a liquefaction step and simultaneous saccharification and fermentation exhibit encouraging results.

A statistical method has been employed in order to determine the optimal acetic acid-catalyzed hydrothermal pretreatment conditions (temperature and duration) for maximizing the production of glucose from corn stover (CS). Hydrothermal pretreatment can be considered an environmentally friendly process, and its efficiency is frequently enhanced by adding a catalytic reagent such as a dilute acid. It was found that the predicted glucose release by the generated regression model was very close to the experimental value and the optimized conditions led to high glucose concentration. Moreover, untreated CS converted to a material with high cellulose composition (61.3 %, w/w) while changes of morphological characteristics were also noticed exhibiting distorted and swollen CS fibers with cracked and perforated surface. Moving to the second step against lignocellulosic biomass, operating at high initial solids content necessitates the incorporation of a liquefaction step in order to overcome mass-transfer limitations. Applying a gravimetric stirring technique using a custom made free-fall mixer enabled liquefaction and efficient enzymatic saccharification at high solids content of 24 % (w/w) obtaining high ethanol concentration (41.5 g/L). According to the results, a 12-h liquefaction/saccharification step was adequate for the efficient cellulose conversion. The pretreated and saccharified CS was fermented in non-sterilized media and without any nutrient addition, underpinning its potential to serve as a feedstock for an economically feasible ethanol production process.