The tear film is a thin structure that covers the surface of the eye. It functions as barrier to evaporation, foreign particles, and bacterial infection. These roles can be primarily attributed to the tear film structure and organization. Tear film is formed by three semi-distinct layers. Lying immediately on the eye’s surface is the mucus layer that acts as a physical barrier to bacteria. Next is an aqueous or water layer that both moistens the eye’s surface and fights off bacterial infection through anti-bacterial enzymes like lactoferrin and lysozyme. Lastly, is the lipid layer, which can be broken down into two different categories. The first is a thin, one molecule thick surfactant layer. Surfactants are detergent like lipids that allow interactions between fats or oils with water. On top of the surfactant lipids is a thicker, waxy lipid layer comprised of Meibomian lipids. Meibomian lipids can be thought of as a bit like oil in that they don’t mix well with water. These meibum lipids prevent the eye’s surface from drying out when our eyes are open. However, much like when oil is spilled on water, meibum spread alone on the eye’s aqueous surface would form droplets which is prevented by the aforementioned surfactant lipids that connect the Meibomian lipids and the water layer. When dish soap is added to oil droplets on water, the oil droplets disperse. Similarly, the surfactant layer allows for even spreading of Meibomian lipids across the eye’s surface. This is important not only for the stability of the tear film but also to allow the unimpeded passage of light to the retina. Therefore, the organization of the tear film is important for normal and healthy eye function. 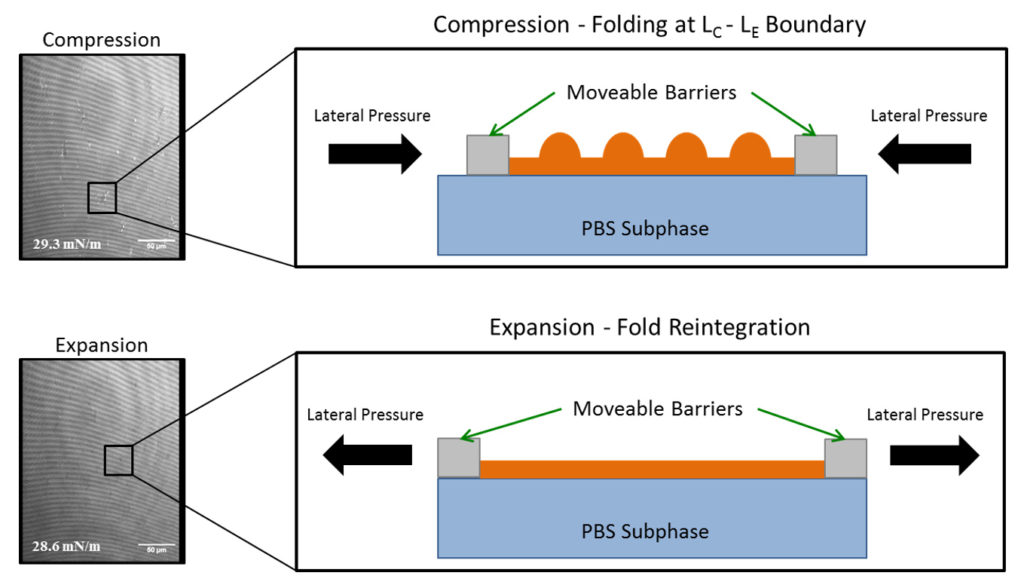 However, the eye’s surface is not a static environment. Not only does the eye rapidly rotate in all directions the tear film is also impacted every time we blink. What happens to this evenly distributed surface during blinking? Our paper explored this question with a special focus on the surfactant layer.

Our study on the surfactant tear film lipids used a Langmuir trough and Brewster Angle Microscopy (BAM). Figure 1 Illustrates the process. A Langmuir trough is an instrument used to examine the physical effects of compressing and expanding films spread over an aqueous or water surface. Repeated compression and expansion cycles, analogous to blinking, on the surfactant lipid layer were visualized with BAM. This method allows direct imaging of thin films at the air-water interface using polarized light set at a specific angle (the Brewster angle). Different mixtures of the major surfactant lipids were spread on the water containing trough and then compressed and expanded using moveable barriers. Micron sized organizational changes were observed with BAM while overall film changes were noted through changes in surface pressure which is a measure of film stability.

Our study showed that specific tear film surfactant lipids were involved in stabilizing the film from collapse during repeated compression and expansion cycles. It was likely that the mechanism of action behind this stability was the reversible folding of the film as evidenced by the BAM data. However, collapse of the surfactant tear film lipids started to occur around the 5th cycle. Overall, the surfactant lipids of tear film likely have a direct role in preventing film rupture during blinking.