Brain bypass: current trends in the treatment of patients with complex cerebrovascular disease

Cerebral Revascularization or bypass is the neurosurgical equivalent of coronary artery bypass. In these procedures a surgeon uses existing vessels in the head and brain or vessels harvested from another part of the body to either replace blood flow in parts of the brain that have been lost due to a disease process, or to augment blood flow in portions of the brain that have been damaged. This procedure originally became popular as a neurosurgical technique in the 1970s but its history has been a rocky one. At its peak, it was used to treat selected patients with decreased blood flow through their carotid arteries, patients with large aneurysms, patients with moyamoya disease as well as some patients with brain tumors. However, over the past 3 decades advances in endovascular interventions as well as the failure of clinical trials to show benefits of cerebral revascularization over other medical treatments have led to decreases in the total volume of these procedures. Endovascular treatments are those in which the surgeon approaches the brain from vessels starting in the groin and treats diseased blood vessels from within the vessel itself. In order to evaluate trends in cerebral revascularization surgery we retrospectively reviewed the case volume of a single neurosurgeon over an 8-year period from 2006-2014. 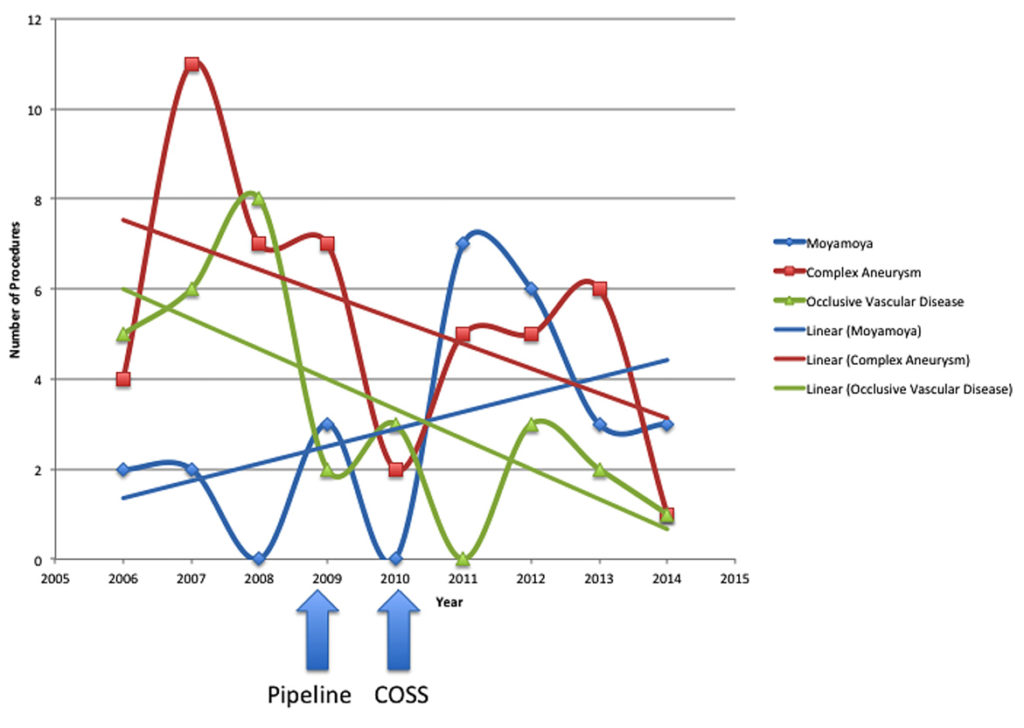 Fig. 1. Graphical representation of the number of cerebral bypass procedures over the period from 2006 to 2014. Marked on the graph are 2 key points in the history of bypass. First is the FDA approval of the Pipeline flow diversion device, which can be used to treat intracranial aneurysms. Second is the publication of the results of the Carotid Occlusion Trial, which showed the benefits of medical treatment over surgical bypass in patients with decreased blood flow through their carotid artery.

In all, 104 patients underwent cerebral revascularization during the 8-year period and were included in the study. Of these, 26 patients were diagnosed with moyamoya disease, a rare disease of the brain’s vasculature that causes decreased blood flow or bleeding in the brain. 48 patients were diagnosed with complex cerebral aneurysms and 30 patients were diagnosed with occlusion of vessels in the brain and recurrent strokes. Patients were considered for bypass if they had one of these 3 disease entities. Cerebral revascularization is currently the standard of care for patients with moyamoya disease although techniques vary between institutions. Aneurysms that were considered for bypass were those that could not be treated endovascularly or with direct clipping.  Patients considered for revascularization in the setting of ischemic disease were those with evidence of decreased blood flow on a single side of the brain.

Overall, of the 104 patients, only 3 patients passed away in the 6-month postoperative period. Lasting complications occurred in a small percentage of patients, with the highest rate of complications occurring in the patients with complex aneurysms. Most notably, this series showed that the number of these procedures has decreased over the recent years and moyamoya disease continues to be the only consistent presentation requiring bypass. 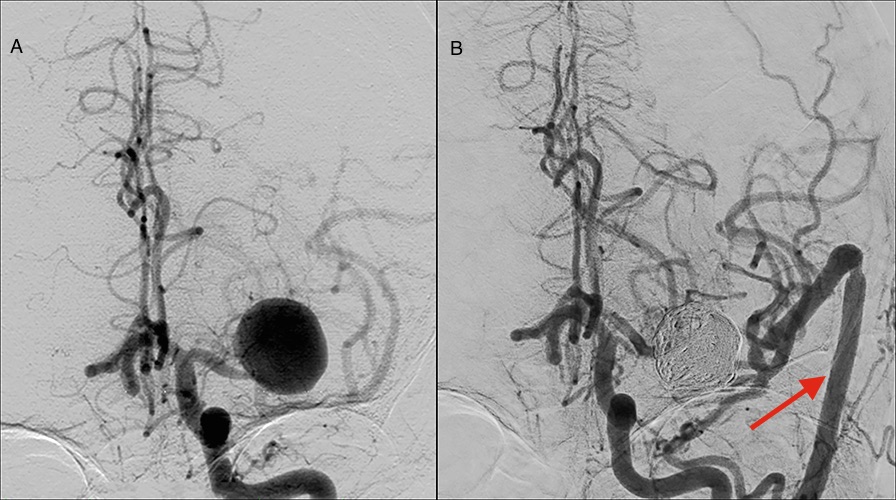 Fig. 2. Internal maxillary artery-to-middle cerebral artery (MCA) bypass, using a saphenous vein graft, of a left MCA aneurysm, which was unsuitable for clipping because of the anatomy. (A) Preoperative angiogram showing an anterior-to-posterior view of giant MCA aneurysm. (B) Postoperative anterior-to-posterior view showing occlusion of the aneurysm by coiling as well as the saphenous vein graft attaching to the MCA distal to the aneurysm. Arrow points to the patent graft.

This paper demonstrates that when performed by an experienced surgeon, cerebral revascularization or bypass still offers the greatest benefit with least amount of disease progression. Nonetheless, the decreased number of indications for this procedure combined with the intense training required to master the technique may cause it to slowly fall out of the neurosurgeon’s armamentarium. The future of this technique depends on recognition of its value in the medical community as well as an organized approach to training in the neurosurgical society.