We have studied three divalent cations (Ca2+, Sr2+, Ba2+) capable of eliciting secretion in adrenal chromaffin and other secretory cells. These cations enter the cells through voltage-sensitive Ca2+ channels, yet Ba2+ and Sr2+ are poorly cleared from the intracellular space. In addition, Ba2+ blocks Ca2+-activated K+ channels, promoting cell depolarization and action potentials. 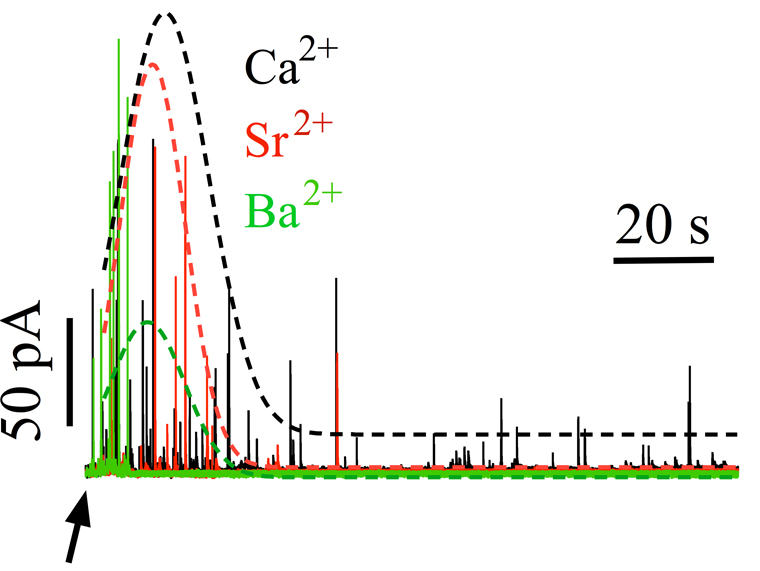 Fig. 1. Secretory responses induced by divalent cations in permeabilized chromaffin cells studied with single-cell amperometry. Superimposed, representative amperometric recordings obtained with 10 s application (arrow) of Ca2+, Sr2+ or Ba2+ at the estimated concentrations (22.5, 44.5 and 41.5 µM of free Ca2+, Sr2+ and Ca2+, respectively). Barium effect (green trace) lasts only during the cation application whereas Ca2+ lasts for minutes (black trace) and Sr2+ (red trace) exhibits an intermediate duration. Superimposed dashed traces show the temporal distribution of spike firing. Calibration bar on the left (in pA) for oxidation currents of secretory spike, on the right for the frequency of secretory events (expressed in Hz) are. Temporal calibration is shown in seconds.

Using Fura-2 on intact chromaffin cells, the extracellular application of Ba2+ increases cytosolic Ca2+ concentrations also inducing long-lasting catecholamine release. When secretion is triggered by pressure application of 5 mM BaCl2, the substitution of Ca2+ by Sr2+ largely affects the kinetics of exocytosis elicited by Ba2+, whereas the replacement of Ca2+ by Mg2+ does not cause effects on secretory spikes (Fig. 2).

We also carried out an electrophysiological study under current-clamp configuration. This study shows that extracellular Sr2+ and Ba2+ cause membrane depolarization and action potentials, which are not blocked by Cd2+ but that can be mimicked by tetra-ethyl-ammonium. When applied intracellularly, only Ba2+ provokes action potentials. In addition, voltage-clamp monitoring of Ca2+-activated K+ channels (KCa) shows that Ba2+ reduces outward currents, which are enhanced by Sr2+.

Our results are compatible with the following sequence of events: Ba2+ blocks KCa channels from both the outside and inside of the cell, causing membrane depolarization that, in turn, opens voltage-sensitive Ca2+ channels and favours the entry of Ca2+ and Ba2+. Although Ca2+ is less permeable through its own channels, it is more efficient on triggering exocytosis. Strontium possesses both an intermediate permeability and an intermediate ability to induce secretion.

Fig. 2. The substitution of Ca2+ by Sr2+ largely affects the kinetics of exocytosis elicited by Ba2+ whereas the replacement of Ca2+ by Mg2+ does not cause effects on secretory spikes. Experiments are conducted using single cell amperometry. Secretion is triggered by pressure application of 5 mM BaCl2 during 5 s. A, kinetics parameters obtained from secretory vesicles Imax, maximal current caused by the catecholamines reaching the electrode; t1/2, spike width at its half height; Q, the integrated area under the spike trace that indicates the total quantal catecholamines released during the exocytotic event; m, the ascending slope was linearized between the 25% and 75% of the Imax. B, Average spikes are built using real values.

We have provided further details of the mechanisms underlying the sustained, yet slower secretory effects of Ba2+ in chromaffin cells, and described some novel actions of the lesser studied cation Sr2+ on BK channel currents and cell excitability that contribute to increase its secretagogue capability in comparison with Ba2+ and Ca2+.