Can Beautyberry treatment improve the success rate of lung transplantation?

Ischemia/reperfusion injury is a type of organ damage that occurs when blood supply returns to the organ after a period of ischemia and a direct consequence of oxidative stress. It significantly contributes to the risk of mortality in lung transplantation recipients and remains a major complication. Therefore, an efficient preventive strategy for successful treatment of lung ischemia/reperfusion injury could significantly improve the success rate of lung transplantation cases. 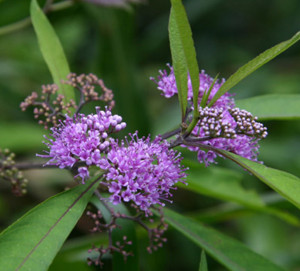 We screened compounds associated with anti-oxidative stress in 200 plant extracts by monitoring the activities of an antioxidant cell signaling pathway called Keap1-Nrf2. Nrf2 regulates the expression of antioxidant proteins, which protect against oxidative stress triggered by injury and inflammation. Our results found that Callicarpa longissima extract is rich in Nrf2 activators and it was shown to have a strong antioxidant effect. Callicarpa longissima is a species of Beautyberry, a shrub that grows in mountainous areas of East Asia. We discovered that the responsible compound to activate Nrf2 is carnosol, which is also found in the herbs rosemary (Rosmarinus officinalis) and Mountain desert sage (Salvia pachyphylla).

To determine whether it has beneficial effects, we treated lung cells with or without carnosol for 1 hour, then exposed them to hydrogen peroxide (H2O2) for an additional 3 hours. Without carnosol, most cells were killed by 50 μM of H2O2, while pre-treatment with carnosol protected cells from H2O2-induced cell death. We also found that carnosol increased levels of an Nrf2-dependent antioxidant protein termed heme oxygenase (HO)-1 in the cells.

Subsequently, to examine whether carnosol has beneficial effects on lung tissue, we used a mouse model. Mice received the extract in their daily diet for 1 week, then following euthanasia the lungs were isolated and cultured in medium at 37°C. Lung damage was monitored by the level of lactate dehydrogenase (LDH), an enzyme that leaks from cells undergoing destruction, released into the culture medium. Measurements of LDH showed that post-isolation damage to the lungs in mice treated with carnosol was slower by approximately 1 hour as compared with lungs from control mice treated with DMSO. Also, in the isolated ischemic lungs, carnosol was shown to increase the amount of HO-1. 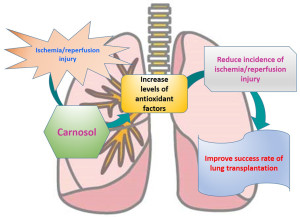 Finally, to examine the effects of carnosol in a state similar to actual lung disease conditions, we performed left lung ischemia and reperfusion in mice by placing a clamp on lung vessels (pulmonary artery and vein). We then measured the level of blood oxygen (O2) in order to examine lung function after ischemia/reperfusion injury. Significant maintenance of O2 level was observed in the carnosol-treated mice, suggesting that the treatment conferred resistance to ischemia and reperfusion injury.

Although research and development of a new drug usually requires a long time period and high cost, drug development by using extracts from natural plants may considerably reduce those. Our results suggest that carnosol is a potent lung protective agent and a novel drug candidate to increase the success rate of lung transplantation.