Can vitamin E protect cells from persistent organochlorine contaminants such as polychlorinated biphenyls?

Many toxic substances, mostly man-made, are present and widespread in our environment. Eventually they become a part of the food chain — e.g. pesticide residues, veterinary drugs and pharmaceuticals, contaminating substances originating from industrial processes – heavy metals, dioxins, polychlorinated biphenyls – PCBs, etc. Many of these compounds, as PCBs, are potential endocrine disruptor chemicals causing reproductive dysfunctions. Scientific studies have revealed a correlation between PCB exposure and adverse effects resulting in ovary/testicular toxicity, altered semen quality, modulation in circulating reproductive hormone levels, thyroid hormone-level alterations, developmental toxicity, neurobehavioral deficits. So, is there any possibility that we could modulate our nutrition plate in order to reduce risk of such chemicals? The answer is yes, because on the same plate we could serve bioactive compounds with role in disease prevention and health promotion. 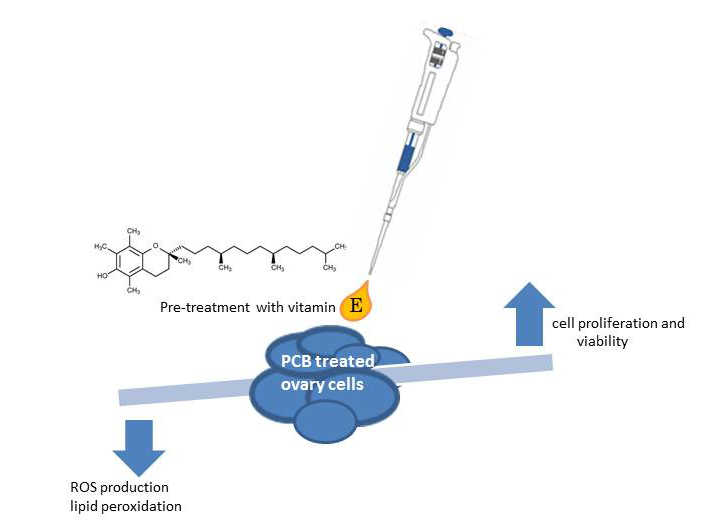 In our recent work, we have tested whether vitamin E may have protective role in PCB induced ovary toxicity. For this purpose, two structurally distinct PCB congeners (PCB 77 and PCB 153) were included in research. Cytotoxic effects and oxidative stress exerted by PCBs is attempted to be reduced with vitamin E pre-incubation. Vitamin E was chosen because it is well known antioxidants capable of protecting cells by eliminating free radical damage and terminating lipid peroxidation. Also, it possesses other beneficial effects, particularly in reproductive tissues – it is discovered as a dietary factor essential for reproduction in rats.

Chinese Hamster Ovary (CHO-K1) cell line was selected as in vitro model system, and cytotoxicity (with or without vitamin E pre-incubation) was followed by different established bioassays: Trypan Blue exclusion method which estimates the number of live and dead cells upon integrity of cell membrane, MTT reduction assay which measures mitochondrial respiratory chain dysfunctions based on activity of mitochondrial enzymes, Neutral Red assay which evaluates ability of viable cells to incorporate and bind the supravital dye neutral red in the lysosomes and Kenacid Blue assay which measures the change in total cell protein content. The effects of congeners in the induction of oxidative stress, as well as the intracellular radical scavenging activity and action of vitamin E were evaluated by measuring the generation of ROS and level of lipid peroxidation.