Can we predict who will become pregnant after undergoing in vitro fertilization?

In vitro fertilization (IVF) is a procedure where the egg is fertilized by a sperm in a dish outside of the body and the fertilized ovum is then placed into the uterus. The chance of having a successful pregnancy after IVF is usually about 30% under optimal conditions. Being able to predict a woman’s chances of having a successful IVF outcome can influence a couples’ choice to undergo this procedure and lead to modifications to improve her chances. 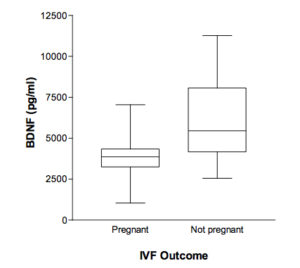 Brain-derived neurotrophic factor (BDNF), a protein normally present at low levels in a woman’s reproductive tract, is released in higher quantities when inflammation or other non-physiological conditions are present. We examined the concentration of BDNF in the blood of women that was obtained just before the start of their IVF cycle. Our findings indicated that the level of BDNF in blood was significantly lower in women with a successful IVF outcome than in women with a failed cycle. A major cause of pregnancy failure is the inability of the embryo to implant in the uterus. Most of the BDNF that is present in the circulation comes from platelets, immune cells that are activated in response to non-physiologic conditions. Elevated BDNF, therefore, may be an early warning sign that something in the body is not right, perhaps the presence of an unrecognized infection or inflammation, and, therefore, conditions are not optimal for the fertilized ovum to implant in the uterus. 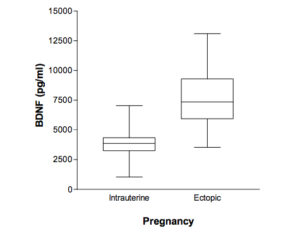 A second finding from our study was that when the BDNF concentration as at its highest level the fertilized ovum was likely to implant outside of the uterus, a dangerous condition known as an ectopic pregnancy. Perhaps in some women the procedure to remove eggs from the ovaries, so that they can be fertilized in a dish, damages nerves in the uterus. This may increase the likelihood that the fertilized ovum will implant outside of the uterus and rather in the fallopian tubes. Nerve damage is a known mechanism leading to elevated BDNF levels. Further studies are needed to confirm whether elevated BDNF levels in the blood prior to initiation of an IVF cycle accurately predicts outcome. It would be of great interest to also determine if an elevation in BDNF predicts pregnancy failure in women seeking to have a spontaneous conception (without the use of IVF).