Cerebral herniation into the sigmoid sinus: A newly-realized cause of epilepsy

Epilepsy is a chronic disorder characterized by recurrent seizures, which may vary from a brief period of lapse of attention or muscle jerks, to severe and prolonged convulsions. The seizures are caused by sudden, usually brief, excessive electrical discharges in a group of brain cells. Treatment with antiepileptic agents is ineffective in about one third of patients. Surgical treatment should be considered in such patients, in whom identification of a lesion on magnetic resonance (MR) imaging indicates a better prognosis, with two or three times higher likelihood of seizure freedom after surgery. Therefore, identification of the lesion causing epilepsy on MR imaging is very important. We recently suggested that cerebral herniation into the venous sinuses may be a cause of epilepsy, in contrast to the conventional understanding of such lesion as innocent. 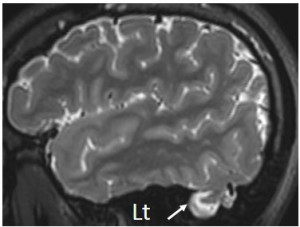 Our 18-year-old female epilepsy patient started to have epileptic seizures with consciousness impairment at age 5 years. She became seizure-free after medication with zonisamide. MR imaging demonstrated protrusion of part of the left temporal lobe and surrounding cerebrospinal fluid into the sigmoid sinus (Fig. 1). Interictal electroencephalography showed intermittent rhythmic slow activity in the left temporal region, an indicator of temporal lobe epilepsy, suggesting localization-related epilepsy caused by the lesion. Glucose hypometabolism was detected in the herniated parenchyma, further evidence that the lesion was epileptogenic. The lesion may have been epileptogenic due to the irritative effect of mechanical traction, with secondary inflammation and gliosis.

Epileptologists and neuroradiologists should carefully inspect small intra-sinus lesions to avoid overlooking brain herniation into the dural venous sinuses, especially in patients with epilepsy. Knowledge of this possible etiology could rescue patients with epilepsy caused by such lesion.