Proteins come in a variety of shapes and sizes but two major classes exist: soluble proteins and those reside in membranes. 20-30% of all the proteins found in cells are membrane proteins. Many membrane proteins such as receptors, transporters and ion channels carry out critical physiological processes and are the targets of a large fraction of all therapeutic drugs. Interestingly, biological warfare at the microbial level also utilises membrane proteins: both bacteria and fungi make toxins that form pores across membranes and thereby kill the affected organisms. For all their diversity, there are only two possible architectures for membrane proteins:  one predominantly made up of alpha-helices while the other is a b-barrel (Fig. 1.). 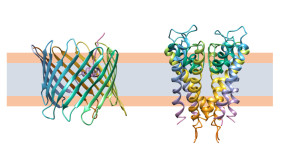 To understand how a protein does what it does, you need to separate it from all the chaos that goes on in a cell – purify the protein and then study it in isolation. This is challenging in case of membrane proteins.  Purifying them requires that you solubilise them from membrane – ie you have to use detergents. An alternative is to express them in a bacterial cell, where they might precipitate. Solubilising the precipitate usually requires both denaturants like urea or guanidine hydrochloride (GnCl) and detergents. This can get you a pure protein, but you don’t know if this is a functional protein. So you need to verify that it is still capable of doing what is expected. Membrane proteins are generally involved in transferring either material or information from one side of a membrane to another. So to verify that it still works, you need to put it back in a membrane where you can monitor its function. To achieve a pure and functional protein you need to fine-tune the protocol, especially the factors like the type and amount of detergent to be used.

Ion channels are a special class of membrane proteins which form a water-filled tunnel across the membrane, through which ions (and sometimes other solutes) can diffuse. The protein of our interest, Voltage Dependent Anion Channel (VDAC) is a b -barrel protein residing in the outer membrane of mitochondrial in all eukaryotic organisms from yeast to humans.  It facilitates uptake of substrates required for respiration from the cytosol to the mitochondrion as well as exchange of ATP and ADP between the two compartments. VDAC also plays an important role in programmed cell death and consequently in cancer and neurodegenerative diseases. 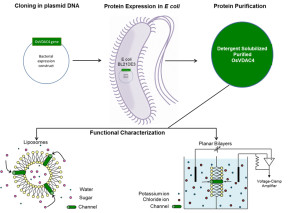 Fig. 2. Schematic representation of the protocol commonly followed for purification and characterization of channel proteins with an example of OsVDAC4.

We have expressed a rice VDAC isoform (OsVDAC4) in specific bacterial strain, E. coli BL21-DE3 (Fig. 2). High amount of OsVDAC4 protein was made but it formed large precipitates which then had to be solubilized using the denaturant Guanidine hydrochloride. The protein was purified in the presence of the denaturant together with a detergent, LDAO by chromatography on a resin called hydroxyapatite mixed with celite (diatomite ash). Finally, the denaturant was slowly removed by dialysis to get pure OsVDAC4 suspended in detergent. .

Purified OsVDAC4 forms channels in two different membrane systems, liposomes (vesicles) made from natural plant lipids and bilayer membranes (electrophysiological assay) made from synthetic lipids and cholesterol (Fig. 2.). In liposomes, OsVDAC4 form pores of ~2.6 nm diameter which can transport a variety of solutes.

In summary, purification and characterization of channel proteins like VDAC in artificial membrane systems can be a useful tool to study function of the protein. The technique can be extended to study details of protein-protein interactions as well as drug-protein interactions.