Charme, the missing link in myogenesis

The central dogma of molecular biology stated that genes encode for proteins and that DNA, which makes up our genomes, mainly produces RNAs which are translated into proteins. However, the completion of the human genome sequence together with methods for the identification of the full set of cellular transcripts have shifted the paradigm of the genome towards the novel vision that the majority of mammalian genes do not have protein coding ability. Indeed, a huge percentage of the cellular RNAs are not translated into proteins and have very peculiar features: they can have very short size (miRNAs, with 20-22 nucleotide length) or very long ones (long noncoding RNAs, up to tens of kilobases) or even have very peculiar structures such as the case of circular RNAs, which are covalently closed circular molecules.  Notably, for most of these molecules an important functional role has been shown in several different molecular processes which control cell differentiation and development. 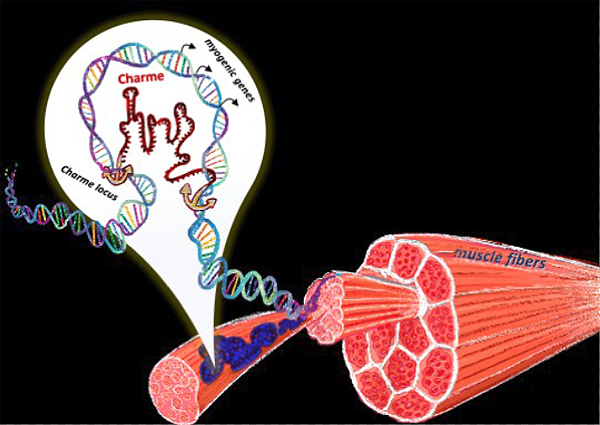 A nice example of a gene having a protein-independent function is CHARME (Chromatin Architect of Muscle expression). It encodes for the long noncoding RNA Charme that is expressed in early phases of murine and human muscle and cardiac differentiation. We demonstrated that, differently from coding RNAs that are located in the cytoplasm, Charme is restricted to the nucleus where it physically associates with specific chromatin regions (Fig. 1). Charme, as an unspliced isoform, remains anchored to the sites of its own transcription and induces a long-range interaction with distant chromosomal regions where several myogenic genes are located. This large chromatin domain was shown to be important for the coordinated expression of the genes therein included and for ensuring the correct execution of the myogenic program. We also demonstrated that if Charme production is inhibited through a specific CRISPR-cas9 genetic editing strategy, mutant mice develop skeletal muscle defects and morphological alterations of heart. Thus, Charme represents a valuable example of a gene not encoding for a protein which plays an important role in relevant differentiation and developmental processes. These data not only confirm that long noncoding RNAs add an important layer of gene expression regulation but that they also contribute to the understanding of how eukaryotic genomes have evolved to respond to the ever-increasing demand for greater complexity of higher organisms.