What are thermotropic liquid crystals? the usual answer considers the two antagonistic terms ‘liquid’ and ‘crystal’ and claims that it corresponds to a special state of matter, in which some organization, inherent to crystals, is retained, while some fluidity, inherent to liquids, allows fast reorganization under external stimuli. The predicative adjective ‘thermotropic’ indicates that, upon a stepwise temperature increase, the crystals melt to provide the liquid-crystalline phase, often referred to as a mesophase. Its domain of existence is limited by a second melting process occurring at higher temperature, named the clearing process, and which leads to an isotropic liquid. 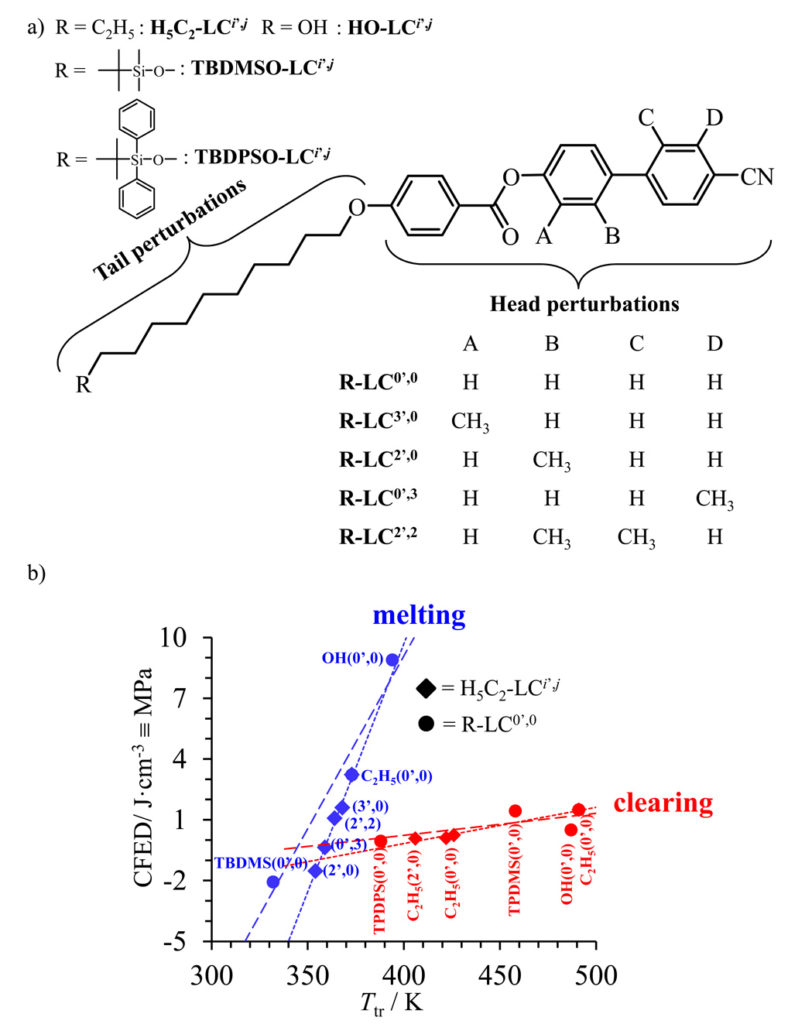 For a chemist, each melting process roughly corresponds to some specific intermolecular decorrelations occurring in a separated (i.e. segregated) nanospace produced by amphipathic molecules, in extenso those made by rigid polar aromatic core (i.e. the head) connected to non-polar flexible chains (i.e the tail, see Figure 1a). Because of their lower intermolecular cohesion, the alkyl chains forming the tail melt at low temperature and produce the mesophase, in which partially organized clusters of the rigid heads are dispersed. At the clearing temperature, a second decorrelation process occurs. Each polar head then behaves independently leading to ‘free’ molecular motion compatible with the formation of an isotropic liquid. If this point of view is realistic, the melting temperatures should be sensitive to chemical perturbations of the non-polar tails, while the clearing temperatures would depend on the modifications of the polar heads. Moreover, the incriminated chemical perturbations should find some equivalence in term of applied pressure since basic physics teaches that the transition temperatures depend on the latter parameter in standard phase diagrams. For instance, the phase boundary for water predicts that its boiling point measured on the top of Everest (72°C) is significantly lower than that obtained at the sea level (100°C) because of the lower pressure operating at 8844 meters. We show in our contribution that the novel concept of cohesive Gibbs free energy densities (CFED) determined at a common reference temperature Tref in a crystalline phase or in a mesophase (Eq 1, DHtr and DStr are the enthalpies and entropies of transition and Vmol is the molar volume) indeed corresponds to the missing link transforming chemical perturbation into pressure increments. Upon plotting CFED as a function of the transition temperatures (Fig. 1b), chemists get a novel version of simple pressure-temperature phase diagrams, and they are now equipped with a simple toolkit for quantifying chemical perturbations in term of their effect on phase transitions parameters.

As a proof-of-concept, the famous liquid-crystalline cyanobiphenyls R-LCi’,j were exposed to chemical perturbations by modifying their tails (R groups) or their polar heads (i’,j groups, Fig. 1a). One immediately notices that the melting temperatures are far less sensitive to chemical tuning (blue trend lines possessing steep slopes in Fig. 1b) than the clearing temperatures (red trend lines possessing gentle slopes in Fig. 1b). As expected, the melting temperatures are more influenced by the perturbation of of the tail (R groups, dashed blue trace in Fig 1b) than by head substitution (i’,j groups, dotted blue trace in Fig. 1b). The clearing temperatures can be tuned by a judicious perturbation of both polar heads (i’,j groups) and non-polar tails (R groups).

Fig. 2. Melting and clearing temperatures observed for liquid-crystalline cyanobiphenyl HO-LCi’,j upon head perturbations and b) R-LC0’,3 upon tail perturbations as a function of the molecular volumes.