Chemically-stimulated production of receptors and ion channels in insect cells

Because primary cultures of insect cells are laborious to produce and maintain and have relatively short term cellular longevity, they are inadequate for insecticide screening, but do have utility for pharmacological experiments.  Insecticide discovery by industry typically circumvents these issues with gene cloning and heterologous expression of ion channel and neurotransmitter receptor proteins in various types of cultured cells, such as Sf-21 or HEK-293. The heterologous expression approach is powerful, but comes with certain disadvantages. For example, many insect neurotransmitter receptors and ion channels have poorly defined subunit composition. Consequently, screening is often performed on homomultimeric or chimeric constructs, which may result in altered pharmacology compared to the native, presumably heteromultimeric target protein complex. This reduces confidence that the in vitro data will help predict insect toxicity and thereby guide chemical analog design. Our work set out to evaluate the presence of known insecticide target proteins in insect cells treated with 20-hydroxyecdysone (20-HE), because previous studies found that several types of insect cell lines grew elongated processes and stopped growing when exposed to this hormone, suggesting neuronal differentiation. 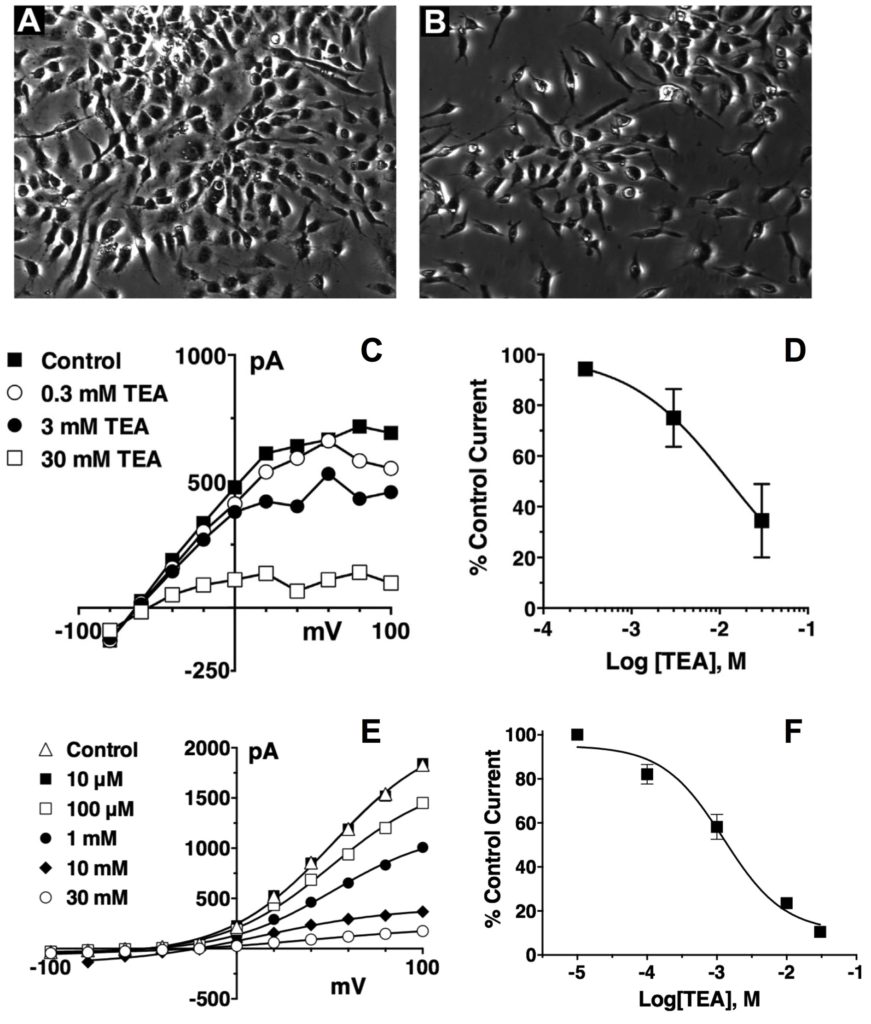 Fig. 1. Effects of 20-HE on Sua-1B cell growth, characterization of induced expression of Kv2 channels by 20-HE, and comparison to AgKv2 potassium currents expressed in HEK-293 cells. A) Control Sua1B cells in complete Schneiders’ medium treated with 0.1% DMSO. B) Sua1B cells after 48 h in medium amended with 42 mM 20-HE. C) Whole cell patch clamp current-voltage plot of potassium channels induced in 20-HE treated cells. D) Concentration-response curve for inhibition of these currents with the channel blocker TEA. Current amplitude was measured 250 msec after applying a depolarizing pulse, and any residual current insensitive to 30 mM TEA is probably due to chloride channels. E) Concentration-response curve for TEA on Sua1B cells, where inhibition was determined for currents elicited at +60 mV. Symbols are means ± SEM. E) Inhibition of potassium current by TEA in HEK-293 cells expressing the AgKv2 gene expressed in a current-voltage plot. F) Concentration-response curve of TEA inhibition of potassium currents in HEK-293 cells induced with tetracycline.

Cultured Sua1B cells, originally isolated from the malaria mosquito (Anopheles gambiae) display a variety of morphological shapes, typically non-spherical and often with fine processes that superficially resemble monopolar, bipolar, and multipolar neurons (Fig. 1A). After 48 hr in 42 mM (1 mg/ml) 20-HE, the cells showed no obvious morphological changes, but inhibition of cell growth was apparent through reduction in cell density (Fig. 1B). Whole cell patch clamp confirmed the expression of delayed-rectifier (Kv2) potassium channels in Sua1B cells treated with 20-HE (Fig. C), whereas untreated Sua1B cells showed no evidence of sodium or potassium channel expression.  Production of functional Kv2 channels occurred in as little as four hours after 20-HE treatment, but were not observed in cells remaining after 24 hours of exposure, suggesting the channels played a role in cell death. The expressed channels showed current-voltage relationships characteristic of the Kv2 subtype, inactivated slowly during a depolarizing voltage step, and were inhibited strongly by TEA with an IC50 = 13 mM (Fig. 1D). Overall, these parameters were similar to Anopheles gambiae Kv2 potassium channels expressed in HEK-293 cells transformed with the corresponding gene (accession number XM_315955.4) under control of a CMV promoter and tetracycline-regulated expression. The biggest differences were the ca. 3-fold greater maximal current amplitude (level of channel expression) observed in the engineered cells and their greater sensitivity to TEA (IC50 = 1.3 mM) compared to hormone-treated Sua-1B cells (Fig. 1E,F).

Subsequent experiments have also found evidence for the 20-HE induced expression of nicotinic acetylcholine receptors in Sua-1B cells. Application of nicotinic agonist (e.g., 10 µM of the insecticide imidacloprid) gave a positive calcium fluorescence signal that was reduced in the presence of 100 µM of the antagonist, mecamylamine. In addition, the induction of imidacloprid-sensitive fluorescence was also accomplished by treating Sua-1B cells with caffeine. The induced presence of ion channels and neurotransmitter receptors in these cells has potential utility for streamlining and lowering the cost of high throughput screening, as well as providing material for basic neuropharmacological and neurodevelopmental research. However, the approach currently shows variable and unpredictable expression levels of the insecticide targets of interest that so far we have failed to ameliorate. Thus, the method requires further refinement before it can fulfill its potential in these areas of study.