Chemotherapy and radiotherapy in abdominal sarcoma

Soft tissue sarcomas (STS) are a rare group of cancers that arise in connective tissues such as muscles, fat and blood vessels. STS can occur almost anywhere in the body but are most commonly found in the extremities and less often in the retroperitoneum (the back of the abdomen), neck and thorax. STS encompass a wide range of tumours with different histology, natural history and size. Their response to treatment is dependent on these features as well as their anatomical location and tumour grade. In retroperitoneal sarcoma (RPS) extended surgery is the mainstay of treatment, however, neoadjuvant (before surgery) and/or adjuvant (after surgery) strategies may be utilised to decrease the risk of both local and distant disease recurrence. In this summary we discuss the current role of chemotherapy and radiotherapy in the treatment of RPS and highlight important on-going international clinical trials of neoadjuvant radiotherapy and chemotherapy. 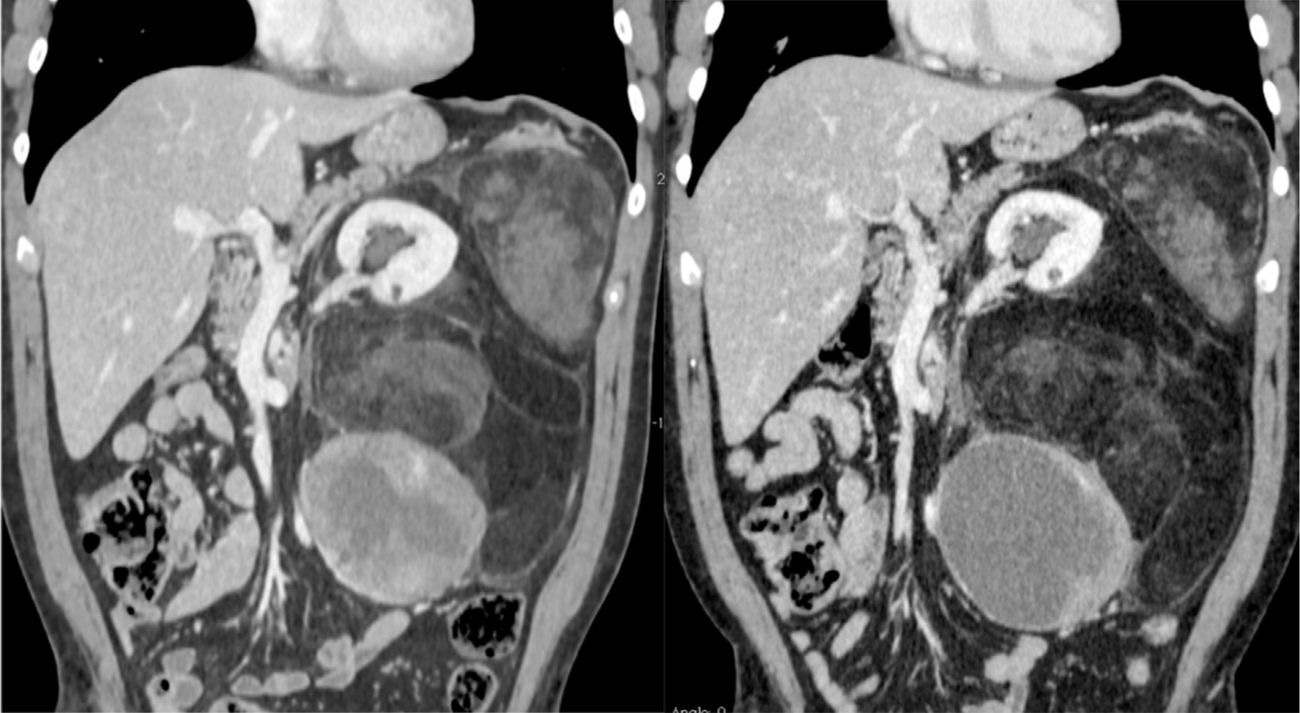 Fig. 1. Coronal CT images showing a left retroperitoneal dedifferentiated liposarcoma before (left) and after (right) neoadjuvant chemotherapy with anthracycline plus ifosfamide (three cycles). The size of the tumour is unchanged, but there is evidence of a pathological response, with cystic degeneration of the dedifferentiated component. This implies there are less viable tumour cells following the course of chemotherapy.

Radiotherapy is a treatment that uses radiation to destroy cancer cells. Neoadjuvant radiotherapy (NRT) aims to sterilise the margins of the tumour with the aim of minimising the likelihood of viable tumour cells being left behind following surgery. Currently NRT is used selectively in RPS. It is considered in patients with tumours abutting vital structures such as major blood vessels or pelvic bones where the possibility for wide circumferential surgical resection is limited.

Although there are no published randomised controlled trials comparing NRT plus surgery to surgery alone in RPS, an ongoing international collaborative study (STRASS trial) has now finished recruiting and the results are eagerly anticipated.

The use of radiotherapy to the tumour margins after surgical resection, termed adjuvant radiotherapy, is not recommended in RPS due to the significant risk of damage to other essential internal organs such as the intestines which fall into the void left by the tumour after surgery.

Chemotherapy is the destruction of cancer cells using medication. Chemotherapy regimens in STS have changed little in the past 40 years as highly effective, targeted therapies remain elusive. In the majority of RPS, chemotherapy is reserved as a palliative strategy and has no proven role as an adjunct to surgery, either in a neoadjuvant or adjuvant setting. There are some notable exceptions: rhabdomyosarcoma, extra-skeletal Ewings sarcoma and synovial sarcoma are all relatively chemosensitive and in these tumours neoadjuvant chemotherapy (NCT) has become standard practice. However, in the majority of RPS subtypes there is no convincing evidence to support the use of NCT and instead clinicians prefer to avoid the delay to surgery and risk of complications associated with chemotherapy use.

The very poor outcomes following surgery in patients with high-grade (highly aggressive) tumours has, however, led to a recent re-evaluation of the role of NCT in these particularly high-risk tumours. Effective NCT could potentially downstage tumours to reduce the complexity of subsequent surgery and could also destroy micrometastases (invisible tumour deposits) to prevent recurrence at distant sites. A new study, currently in development, called STRASS 2 will aim to compare outcomes in patients with high- and intermediate-grade tumours treated with NCT and surgery versus surgery alone. This international multi-centre randomised controlled trial is due to start recruiting patients in 2020.

A collaborative effort is critical to improving outcomes and advancing treatment strategies in RPS. The Transatlantic Retroperitoneal Sarcoma Working Group acts as an international forum for discussion of RPS treatments and for facilitation of global trials, which are essential in this rare disease. However, major improvements in outcomes will only come from development of novel treatments through research and innovation, and continuous engagement between clinicians and basic scientists is essential to achieving this goal.