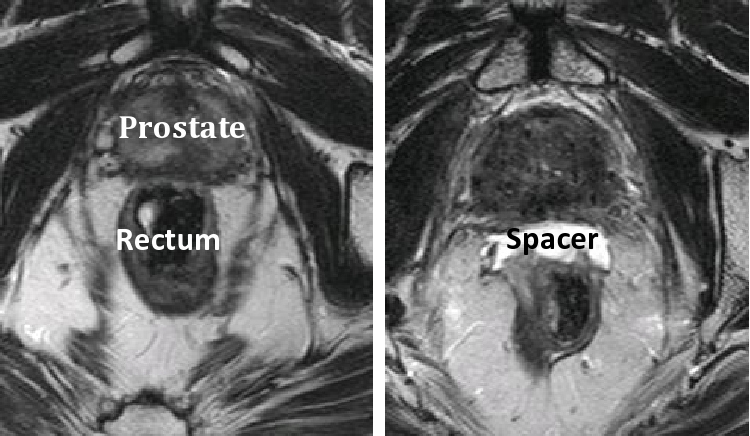 Fig. 1. Axial T2-weighted magnetic resonance images of a patient with a hydrogel spacer before injection (a) and after injection (b).

First of all, care should be taken to minimize the risk of CRP by improving RT techniques (Intensity-modulated RT, image-guided RT) or to implement new devices to spare the rectum (spacers, balloons). These are implanted as a tissue filler between the prostate and the rectum (Fig. 1). Increasing the prostate-rectum distance displaces the rectal wall away from the prostate and out of the regions of high-dose RT. Several studies are available on the acute outcome, and cost-effectiveness of a rectum spacer; however, no long-term results are available yet.

The use of medical therapy (amifostine, sucralfate, or sulphasalazine) to prevent the development of CRP has only a minimal effect, and is not widely used.

There is no consensus on the optimal treatment of CRP.

CRP has a natural history of improving over time, even without treatment. This is important to take into account when considering those treatments: first be conservative and be aware that invasive treatments can be very toxic. The literature generally recommends a flexible endoscopy to determine the cause. Biopsy, and especially anterior rectal biopsy, within the first years of RT should be avoided, because this augments the risk of a fistula and is not likely to provide any relevant information.

I-CRP responds well to medications as anti-diarrhea, fibers, stool bulking agents, and corticosteroids. B-CRP is often self-limiting and responds well to conservative management: it is advisable to stop anti-coagulants, if possible, and start with antioxidants (vitamin A, E, C) and/or antibiotics (metronidazole).If no response is observed, patients should be started on sucralfate enemas. In severe cases, with persistent bleeding, endoscopic treatments as chemical (formalin) or thermal (coagulation) treatments are successful. If Hyperbaric Oxygen Therapy is available, it may also be a good option. Surgery should be considered as the last resort and is only indicated if fistulas and strictures are not healing. Although surgery can lead to significant improvements, it also bears an increased risk of post-surgical complications.

Based on the frequency of CRP, prospective controlled and larger studies are advised to increase our knowledge about both the prevention and treatment of CRP.