Aortic stenosis (AS) is the most frequent type of valvular heart disease in Europe and North America. It primarily presents as calcific AS in old people (2–7% of the population > 65 years). Calcific AS is a chronic, progressive disease. During a long latent period, patients remain asymptomatic. Sudden cardiac death is a frequent cause of death in symptomatic patients but appears to be rare in the truly asymptomatic (less than 1% per year), even in very severe AS. As soon as symptoms occur, the prognosis of severe AS is dismal, with majority of patients dying within 5 years. Unfortunately, AS cannot be effectively treated with medical therapy, therefore the only therapy is the valve replacement. 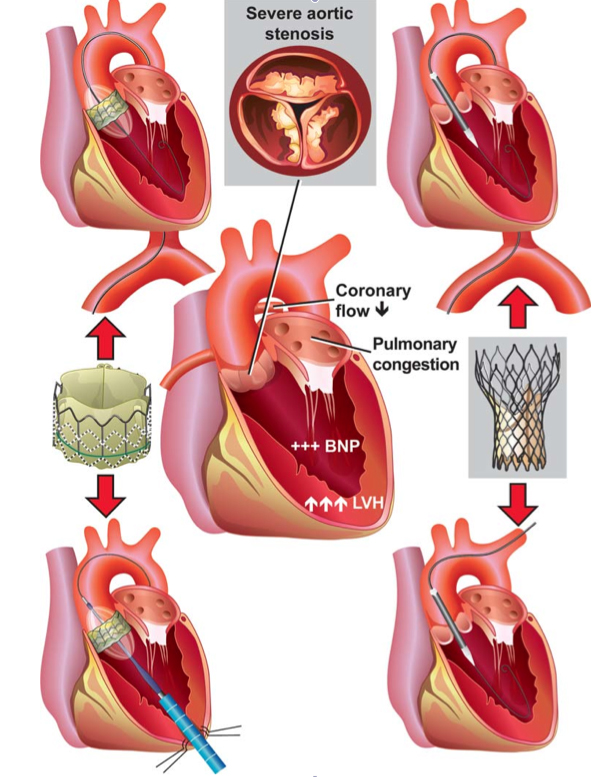 For many years, surgical aortic valve replacement (SAVR) has been the solely option for patients with severe AS. SAVR requires an open-heart procedure with a “sternotomy”, in which the chest is surgically separated (open) for the procedure. However, this strategy is invasive, and cannot be offered to all patients with AS due to their advanced age and presence of other diseases that make them inoperable or at high-risk for surgery.

In the last decade, the transcatheter aortic valve implantation (TAVI) has demonstrated to be a valid alternative to SAVR for those patients deemed inoperable or at high risk for SAVR. This minimally invasive surgical procedure repairs the valve without removing the old, damaged valve. TAVI delivers a fully collapsible replacement valve to the valve site through a catheter. Once the new valve is expanded, it pushes the old valve leaflets out of the way and the tissue in the replacement valve takes over the job of regulating blood flow. A TAVI procedure is not without risks, but it provides beneficial options to people who may not have been candidates for them a few years ago while also providing the added bonus of a faster recovery in most cases.

Patients with chronic kidney disease (CKD) are often delicate due to comorbities and risk of complications. The detrimental impact of pre-procedural CKD on worsening the prognosis of patients undergoing SAVR was well established, but this remained debated in patients undergoing TAVI. In a previous meta-analysis (Gargiulo et al., Circ Cardiovasc Interv 2015) we had demonstrated that CKD (stages 3–5) significantly worsened prognosis (increased early and 1-year mortality, early stroke, acute kidney injury, need for dialysis, and length of hospitalization). For the first time, moderate CKD alone (stage 3) was found to worsen outcomes after TAVI, in opposition to previous studies. Subsequently, new evidence emerged and we updated the meta-analysis focusing specifically on the impact of CKD on mortality. We confirmed that mortality was significantly increased in patients with moderate CKD (6 studies, 6525 patients; Fig. 2, upper panels) as well as in patients with moderate-to-severe CKD (stages 3–5) compared with no-mild CKD (6 studies, 7726 patients; Fig. 2, lower panels).

Fig. 2. Mortality after TAVI in patients with chronic kidney disease.

In conclusion, these studies are clinically relevant because clearly demonstrate that CKD is associated to increased mortality after TAVI, with the degree of renal dysfunction acting as an independent predictor. Therefore careful stratification and management of these patients should be undertaken in order to prevent complications and improve their prognosis.