In 1865, Gregor Mendel discovered the laws of inheritance for the traits of living organisms. Reproduction, the major property of living matter and mode of its existence in the Universe, found itself in the spotlight of biology. In his experiments with pea plants, Mendel studied inheritance of traits determining intraspecific differences, which distinguish the plants of one species from one another. He crossed the pea plants with white flowers and red flowers, with round and wrinkled seeds, etc.

Along with the characters responsible for intraspecific differences, there is another type of traits determining intraspecific similarity. For example, any pea plant has root, stem, and leaves. 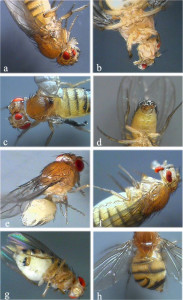 Our review describes the own results on the mutagenesis-based search for intraspecific similarity genes in Drosophila fly. Four methods for isolating γ-radiation-induced mutations responsible for similarity were elaborated; 75 mutations in chromosomes X, 2, and 3, referred to as conditional, were studied. Unlike common mutations, the conditional mutations do not appear in all individuals of a species, manifesting in one genotype and being invisible in another.

The conditional mutations fundamentally differ in their properties from common mutations. They are obligatory dominant, their manifestation depends on the genotype, and, in addition, they destabilize the genome. This instability appears as (1) loss of mutation manifestation with time; (2) chromosome nonsegregation and loss in mitosis and meiosis; (3) migration of mobile elements; and (4) high frequencies of secondary mutations, modifications, and morphoses (monstrosities). Figure 1 shows examples of morphoses: (a–c) reduced head copies and doubled head, (d) doubled male genitals, (e) abdomen rotated by 180°, (f) divided eye, (g) fragment of tergite on abdomen, and (h) loss of two tergites.

The conditional mutants have changed energy balance, displaying increased mobility and basic metabolism. Figure 2 shows locomotor activity of control (red and blue) and mutant (black) fly lines. This activity changes, increasing in the daytime and decreasing at night; however, mutants are always more active than the control.

Fig. 2. Locomotor activity of an adults of D. melanogaster of 6 lines for 3 days.

The first, second, and third chromosome pairs house the generated mutations, which are inherited in a parental manner (maternal and paternal effects), suggesting that the mutant genes function in the male and female germline before a meiosis.

Mutations manifest depending on the presence of chromosome rearrangements in the genome, suggesting that small RNAs are the major structural component allowing for their manifestation, since the distance between the site where a regulatory product is formed and its target is important for implementing its regulatory function.

The obtained data demonstrate that the organism has a special previously unstudied group of regulatory genes acting in its germ cell lineage. The products of these genes of both parents determine the order of individual development in the offspring. The corresponding mutations allow the unique regulatory system providing for intraspecific similarity to be decomposed into elements and studied.