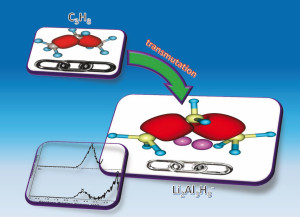 The capacity of atoms to form bonds with themselves producing chain-like structures, so called atomic homocatenation, plays an important role in the life formation. Carbon is capable of forming very long chain in the CnHn+2 alkanes. Other elements like silicon, gallium, indium, also are known to form chain molecules, though not as long as carbon. However, such molecules were not known for aluminum. In a very recent work from research groups of Dr. Kit H. Bowen in Johns Hopkins University and Dr. Alexander I. Boldyrev in Utah State University, scientists have managed to “transmutate” Al atom into carbon atom by giving one electron (PCCP DOI: 10.1039/C5CP04148A (2015)). Aluminum has three valence electrons, and by obtaining one electron from lithium atom, aluminum atom transmutates into carbon atom. Hence, they were able to produce an AlH3-AlH2-AlH3 chain in the Li2Al3H8– cluster, where each of three aluminum atoms takes one electron, two from two lithium atoms, one from the negative charge. Xinxing Zhang in Johns Hopkins University experimentally observed the Li2Al3H8– cluster via mass spectrometry and anion photoelectron spectroscopy, while Ivan A. Popov in Utah State University calculated more than 30,000 possible structures of this cluster. It turns out that the chain structure is the most stable one out of all the 30,000 structures calculated. The synergy between experiment and theory proves that the three aluminum atoms are indeed in a chain, and the structure of the Al3H8 kernel looks very much like propane molecule, which is known to public as a popular choice for barbecues and portable stoves. The chemical structure of propane molecule is a chain of three carbon atoms bonded with eight hydrogen atoms, written as CH3-CH2-CH3 (or C3H8). The four valence electrons of carbon make it form four chemical bonds, some of the four bonds are used to connect with adjacent carbon atoms to form the chain, and the rest are saturated by hydrogen atoms. In the attached figure, the structural similarity between propane and Li2Al3H8– is presented.

Aluminum has also been used as energetic materials because of the high combustion energy, even higher than those of carbon compounds. More interestingly, the compound made of aluminum and hydrogen, also known as aluminum hydrides (“alane”), with the formula of AlH3, seem to work even better than pure aluminum. The specific impulse of an AP/HTPB rocket propellant filled with alane was calculated to be 100 N s kg-1 higher compared to the same concentration of aluminum. Recently, more than 200 new aluminum hydrides have been produced and identified by modern physical chemistry techniques in the Bowen group, promising to have applications as highly energetic materials. However, the structures of aluminum hydrides tend to be cages, which makes the chain structure of the Al3H8 kernel very unique.

While structurally mimicking carbon chain, the Li2Al3H8– cluster still maintains the advantage of aluminum hydride: highly energetic. Scientists who expert on inorganic synthesis are making great efforts to synthesize Li3Al3H8 in large quantity, where the negative charge is replaced by another Li atom. This newly designed compound promises to have applications as hydrogen storage material, reducing agent, and energetic materials.