A domestic central heating system uses a boiler, powered by electric or gas, to heat water. This is then pumped around the system to radiators that heat a room by radiation and convection. The heat transfer fluid (HTF) in this system is water. In an industrial plant, the HTF can be water or steam, but if higher temperatures are required, fluids that are oil-like may be more appropriate. Indeed, concentrated solar power (CSP) plants use a synthetic fluid composed of biphenyl and diphenyl oxide (commercially available fluids that are household names in the industry include Dowtherm A, Therminol VP-1 and Globaltherm Omnitech) and this HTF can be heated to 400 degrees Celsius. This formulation of chemicals is the most commonly used HTF in the CSP sector. 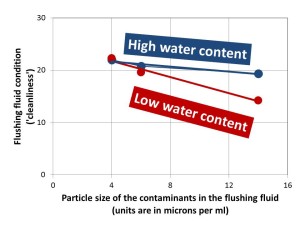 Unlike water, the fluids used in industrial plants can be extremely expensive and so manufacturers are keen to sustain the operating life of these fluids for as long as operationally possible. This is done by monitoring the condition of the HTF on an ongoing basis. This process assesses the degradation of the fluid and is used to make decisions as to where the condition is good, bad or somewhere between the two. However, the condition of a HTF is influenced by its environment and any contamination works to effectively accelerate the degradation of the fluid. Contamination can occur during normal operation (e.g., from wear particles circulating through the system) but also whilst new systems are being built as such system may be exposing to the external environment during assembly.

The newly built system had a 100 metric ton capacity. The system was flushed with Globaltherm C1, an industrial flushing fluid. After being flushing around the system, this fluid was drained and chemical analysed to assess the extent of contamination, which included water content as well as particles, based on particle size, originating from the environment i.e. iron, silicon, aluminium, zinc and calcium.

Figure 1 highlights the newest finding in this research. The data was divided based on water content which was divided into low and high levels based on a value of 100 parts of water per million. The particles in the flushing fluid were assessed according to ISO 4406:1999 cleanliness coding. This approach groups particles based on size (4, 6 and 14 microns) and also quantity with a higher cleanliness score representing a higher quantity of particles. Figure 1 shows the quantity of particles, particularly 6 and 14 microns, were higher in the high water content group than the low water content group. This association between water and environmental contaminants suggests that the presence of water is a good indicator of environmental contamination in newly built systems.

Key conclusions from this research
This is the first study to demonstrate the effectiveness of a flushing fluid in the removal of contaminants from a HTF system. But, also to show the benefit of flushing a HTF system as it removes contaminants that could accelerate the ageing of a fresh and expensive HTF.

Findings also suggest that flushing a HTF system with an industrial flushing fluid should be considered as ‘best practice’ by manufacturers wanting to fill a new HTF system or to refill an old HTF system.

Lastly, the relationship between water and environmental contaminants suggests that water may be an indicator of contamination and may be even an early indicator as it can be visually detected and is also relatively easy to measure engineers on-site.

The use of a flushing and cleaning protocol to remove foreign contaminants – a study from a newly built heat transfer plant with a capacity of 100 metric tonnes
Wright CI.
Applied Thermal Engineering 2016