Depression is a disabling, high-prevalence psychiatric condition. It is well established that depression is linked with physiological changes that can contribute to an unfavorable outcome in cardiac patients. As depressed patients exhibit impairments in the autonomic nervous system (ANS) modulation, it has been proposed that ANS dysregulation is one of the mechanisms linking depression to the worsening of the outcome of cardiac patients. If this hypothesis was correct, it would expect a higher prevalence in the development of heart disease in depressed patients who were previously cardiac-healthy as compared to non-depressed subjects. However, so far, the association between depression and cardiac disease has not been consistently documented; one previous study included patients that were taking antidepressants, and the other included smoking and diabetics patients, two factors that are well known to influence ANS modulation. 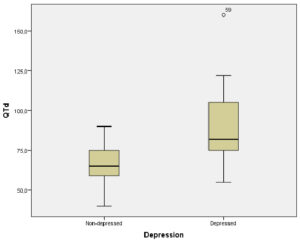 Fig. 1. The QT dispersion (QTd) values on electrocardiogram are significantly higher in depressed women as compared to non-depressed women.

ANS balance affects both the sinus node and the ventricular myocardium. The sinus node controls heart rate, which in turn inﬂuences the QT interval on electrocardiogram (ECG). On the other hand, direct actions on the ventricular myocardium influence the duration of cardiac repolarization and increase arrhythmia vulnerability. Interlead variability of the duration of the QT interval in the ECG, defined as QT dispersion (QTd), reflects nonhomogeneity of repolarization of the myocardium. An increase of sympathetic tonus or a decrease in parasympathetic activity can generate an increased QTd.  Therefore, QTd reflects ANS modulation in the heart.

The association between increased QTd and depression was investigated in a few studies to date. However, they have focused only on presence or absence of depression, and did not take into account the degree of depression. As both QT dispersion and depression are related to ANS, we studied the relationship between depression severity and QTd in cardiac–health, non-smoking and untreated depressed women. The 17-items Hamilton Depression Rating Scale (HDRS17) was used to measure depression severity. Our study was conducted in the Rio de Janeiro State University, Brazil. 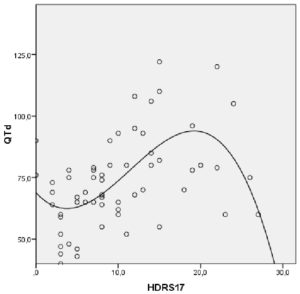 Among 236 women who visited the hospital for routine evaluation, sixty were included in this research (23 depressed and 37 non-depressed women). The sample included only women without cardiovascular disease, hypertension, diabetes or smoking and who were not using antidepressants or other medication that could interfere with ECG. We found that QTd values were significantly higher in depressed women as compared to non-depressed women (Fig. 1). Surprisingly, an increase in the degree of QTd was correlated with an increase in the HDRS17 score up to 20 points on the depression scale (Fig. 2). After this point, the increase of the HDRS17 score correlated with progressively lower values of QTd. This suggested an effect of depression severity on QT dispersion in mild and moderate depression.

The monoamine hypothesis of depression is widely accepted. The change in the neurotransmission of these monoamines can interfere with sympathetic neural discharge. Brain serotonin is a neurotransmitter with central sympathoinhibition properties. In contrast, norepinephrine is considered to be a sympathetic excitatory neurotransmitter. As serotonin has central sympathoinhibition properties and QT dispersion increased in women with mild and moderate depression, this neurotransmitter may have been the most significant influence on the increase in QT dispersion in these patients. In contrast, severe depression may be associated with a predominant reduction in the action of other monoamines such as norepinephrine.

Our study supports the idea that the degree of depression may be associated with different neurotransmitters acting on the ANS. This has implications for the choice of the antidepressive drug. Moreover, it suggests that cardiac sudden death may occur in mild and moderate depressive patients, even in the absence of any previous heart disease.