Attention Networks
Brain imaging has provided a great window on how networks of neural areas develop from birth through adulthood. The infant comes to control the waking state during the early months of life. During waking periods they turn their head and eyes toward parents, sibling, pets and novel objects. They control emotions by shifting their gaze toward positive and away from negative events. The orienting brain network which controls these behaviors shows strong development in early life.

Developing more slowly is a network that provides control over the longer term voluntary movements of children as they physically interact with their world. This executive network develops more gradually and in later life dominates the control of emotion and behavior. Together the brain networks that maintain alertness, orient to sensory events and resolve conflict between voluntary actions constitute a major part of the brain’s attention networks as shown in in Figure 1. 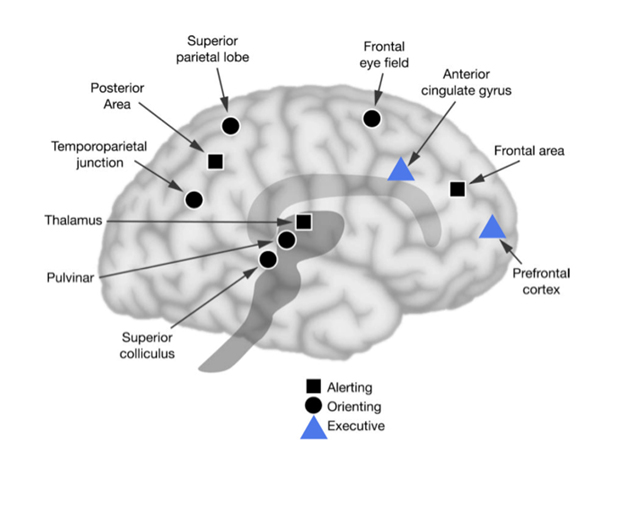 Temperament
As parents of more than one child recognize, developing infants exhibit vast differences in how rapidly they respond to events, how strongly they become frustrated and how easily they learn to exercise control of their emotions and behavior. We call these differences in emotion attention and behavior the child’s temperament. We can learn about their temperament by asking specific questions of the parent about their child’s behavior. By combining the answer to many questions we can give each child a score on such dimensions at negative affect, fear, frustration to limitations, smiling and laughter and soothability and attention. We can observe and measure children’s temperament in the laboratory.

Relating Temperament and Attention
During the third year of life parents can rate their child in how well they control their own behavior. Do they put away toys when asked, do they come to dinner when called, can they control their response to pain when they fall. This dimension of individual differences in temperament is called effortful control. Ratings of effortful control during childhood have been shown to predict important life outcomes thirty years later such as positive social relationships, higher income and better mental and physical health. Efforful control is of great significance to the successful adaptation of the child to their environment.

Are these observation of parents about their child’s behavior related to the attention network that control our voluntary responses? To determine this we can use a simple test to measure the ability of a child to resolve conflicts among competing responses.

Figure 2 is a child friendly version of the Attention Network Test. The child presses the left key as quickly as possible when the central fish swims left and the right key when they swim right. Conflict is introduced by the fish placed on each side of the central fish. Subtracting the times when the flanking fish swin in the same direction as the central target (congruent, upper panel Figure 2)  from the times when they swim in the opposite direction (incongruent, lower panel Figure 2) gives a measure of the speed of resolving conflict. This simple measure of how quickly the conflict is resolved is related to the parent reports of their child’s effortful control, indicating that effortful control as observed by parents if related to the efficiency of the executive brain network of their child.

These findings show that successful development of the child’s attention networks is critical to their successful socialization. The findings provide a basis for  studying how best to develop brain networks of children with varying underlying temperaments. Based on these findings we are seeking to understand how genes and developing experience both jointly determine the behavior of children and adults.