Neurodevelopmental syndromes refer to a group of inborn diseases that present with impairments of the growth and development of the brain, and facial and somatic dimorphism. The differential diagnosis of these disorders is challenging because of the overlapping features that are present in variable forms in different affected individuals. Diagnosis of these syndromes currently primarily relies on genetic testing, by analysing DNA of the patients for abnormal changes (mutations) in genes related to a particular neurodevelopmental disease. This approach is not entirely effective since a large number of the genetic changes discovered in genetic testing are not interpretable (i.e. genetic variants of unknown significance). As well, a large portion of the DNA is not currently examined in routine genetic testing. As a result, the causative mutations are often not found, and diagnoses can remain unsolved. In addition to genetic changes (DNA modification) other types of molecular defects can disrupt gene function. One such “epigenetic” (“above” or “on top of” genetics) modification is a chemical addition/removal of a methyl group to DNA molecule. DNA methylation regulates how genes are turned on and off, a process crucial for normal development. We hypothesized that patients with neurodevelopmental syndromes carry DNA methylation changes in their peripheral blood (epi-signatures) that are specific to each syndrome and thus they can be used for the diagnosis of such conditions. 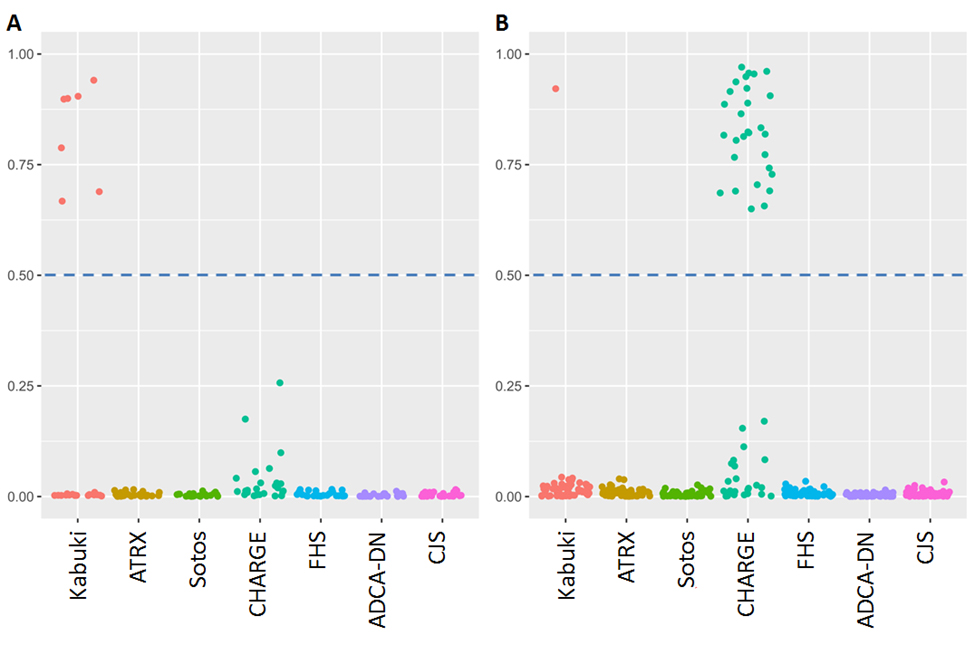 Fig. 1. A multi-class prediction algorithm generates seven scores for every subject as the probability of having any of the seven conditions: Kabuki syndrome, alpha thalassemia/mental retardation X-linked (ATRX) syndrome, Sotos syndrome, CHARGE syndrome, Floating-Harbor syndrome (FHS), adult-onset autosomal dominant cerebellar ataxia, deafness, and narcolepsy (ADCA-DN) syndrome, and Claes-Jensen syndrome (CJS). Genitopatellar and Say–Barber–Biesecker–Young–Simpson syndromes are not included in this algorithm due to insufficient sample sizes. The Y-axis of the plots represents scores 0-1, with higher scores indicating a higher chance of having any of the seven conditions. X-axis represents the seven scores generated for the same group of tested subjects. Every point on the plot shows any disease score belonging to a single individual. Panel A shows 36 subjects with an initial assumption for Kabuki syndrome, of which seven are scored high for Kabuki syndrome, and the rest are scored low for all of the seven diseases. Panel B shows 55 subjects with an initial suspicion for CHARGE syndrome, among which 28 are classified to be a case of CHARGE syndrome, and one subject is found to have a Kabuki syndrome.

We examined DNA methylation patterns in the peripheral blood of a group of patients with 14 different neurodevelopmental syndromes, and found highly specific DNA methylation epi-signatures in nine disorders, including Floating-Harbor syndrome, adult-onset autosomal dominant cerebellar ataxia, deafness, and narcolepsy syndrome, alpha thalassemia/mental retardation X-linked syndrome, Sotos syndrome, Kabuki syndrome, CHARGE syndrome, Claes-Jensen syndrome, Genitopatellar syndrome, and Say–Barber–Biesecker–Young–Simpson syndrome. We also determined that the level of similarity across the epi-signatures of these syndromes is minimal, and that each syndrome harbours a specific DNA methylation pattern that is not present in others, making this technology amenable to diagnosis and screening of these conditions. Using machine learning computation, we created an algorithm which, based on the DNA methylation profile of a patient, generates a score ranging from 0 to 1 representing the probability of a given individual to have any one of these syndromes. Using independent cohorts of patients and various non-affected individuals we demonstrated near-absolute sensitivity and specificity of this approach for identifying affected patients.

This algorithm was used to assess a cohort of undiagnosed patients with a broad range of neurodevelopmental presentations, as well as patients carrying genetic variants of unknown significance in a gene related to these conditions. We successfully resolved patients affected with these syndromes, from ones not affected with these specific conditions, and were able to resolve and clinically reclassify of genetic variants of unknown clinical significance (Fig. 1). In some cases our method assigned a new diagnosis. For example, a patient initially suspected of having CHARGE based on the clinical features syndrome was shown to have a Kabuki “episignature”, which was subsequently confirmed by targeted DNA sequencing. This study demonstrated the clinical utility of DNA methylation for screening and diagnosis of neurodevelopmental syndromes, and ability to resolve otherwise genetically ambiguous cases and genetic variants of unknown clinical significance.