Birds are among the most popular organisms on earth. Their majestic appearance, lovely songs as well as the ability to fly have always thrilled people making them one of the most thoroughly investigated classes of the animal kingdom. However, the preen gland of birds is still full of secrets. The majority of birds have a preen gland which produces a waxy secretion. During preening, birds squeeze the preen gland channeling preen oil outside the body. With their bill, they distribute the preen oil in the entire feather coat. This – among other things – renders the plumage water-repellent and is one of the reasons why birds can swim and dive without wetting their feathers. 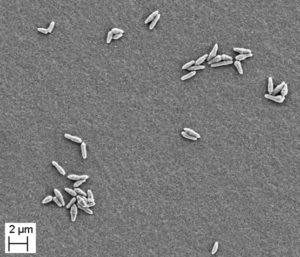 Nevertheless, in a biological context, preening is associated with substantial expenses: for example, birds devote about 10% of their daily time to preening while energy consumption might even be higher than in physically exhausting actions like diving. Accordingly, preening must be an integral part in the survival of birds with an overall positive cost-benefit ratio as it would have been otherwise eradicated by natural selection long times ago. Apart from the wettability, other functions of preen oil such as kin recognition, predator defense, mate choice and thermal regulation are discussed. Besides, it is responsible for the suppleness of feathers. Preen oil-dwelling bacteria might enter the game by producing antimicrobial compounds (bacteriocins) making preen wax an antibiotic body lotion with the capacity of killing infectious bacteria and dermatophytes. Since some bacteria destroy feathers by feeding on feather keratin, preen oil could also be important in maintaining the ability to fly. However, bacteria in preen glands are rare. Bacteria have only been found in the order Bucerotiformes in preen glands of Hoopoes (Upupa epops) and Green Woodhopooes (Phoeniculus purpureus). In both cases the bacteria belong to the genus Enterococcus. Recently, we discovered bacteria outside the order Bucerotiformes and outside the genus Enterococcus. The detected microorganisms belong to the genus Corynebacterium and were recovered from preen glands of healthy Turkeys (Meleagris gallopavo) in the Zoo of Heidelberg. Based on their origin, the preen gland (lat. Glandula uropygialis), the newly described bacterium was named Corynebacterium uropygiale. Corynebacteria are club-shaped organisms (Figure 1) and part of the normal microbiome. Before, they have been found to co-exist with birds in the cloacae of Magellanic Penguins (Spheniscus magellanicus), choanae of Golden Eagles (Aquila chrysaetos) and trachea of Black Storks (Ciconia nigra). The new species of bacteria can be regarded as a perfect example of how evolution works. Since preen oil is a waxy substance containing numerous lipophilic components such as fatty acids, it is ‘cheaper’ for bacteria living in such an environment to exploit these natural resources instead of wasting energy by synthesizing them by themselves. In the course of evolution, bacterial metabolism has adopted to their surrounding in a way that C. uropygiale can only survive in preen oil (or other lipid-containing media). They lost the ability of synthesizing certain lipids and may use the saved energy to boost the rest of their metabolism.

Vice versa, the meaning of the bacteria for Turkeys has to date not been resolved. The microorganisms do not produce antibiotic substances, nor does preen wax of Turkeys exhibit antimicrobial activity. Therefore, a symbiotic relationship as seen in Hoopoes and the Green Woodhoopoes is unlikely. However, the bacteria could produce substances other than antimicrobials that are beneficial for Turkeys or – by their mere presence – prevent the colonization of preen wax by pathogenic bacteria. The latter was also found to be true for bacteria colonizing the human intestine and skin.