Membrane proteins act as the gateways of the cell. They are essential for the signalling between cells and for the uptake of nutrients; they constitute major drug-targets in human, and their malfunctions are related to severe diseases such as cystic fibrosis or Parkinson. To understand membrane proteins and their malfunctions, structural knowledge is fundamental. Solid-state nuclear magnetic resonance (ssNMR) spectroscopy is a powerful technique to investigate membrane proteins at high-resolution. A particular advantage of ssNMR spectroscopy is that studies can be directly conducted in heterogeneous proteoliposomes. 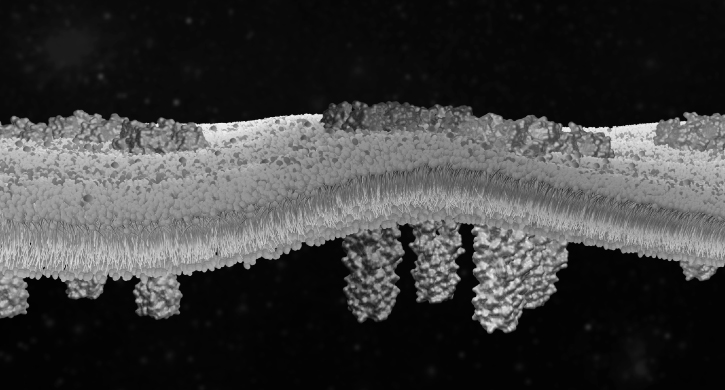 In principle, ssNMR spectroscopy even allows for studies of membrane proteins in cell membranes, i.e., directly in native physiological conditions. Such truly native studies are considered a holy grail in structural biology. This is because membrane proteins are strongly modulated by their membrane environment, and only native studies guarantee that research is conducted on relevant, e.g., druggable, states of membrane proteins. However, conventional ssNMR spectroscopy drastically suffers from low spectral sensitivity in native cellular membrane preparations due to the very dilute concentration of the target protein.

In our recent publication, we have introduced an ultra-sensitive ssNMR approach that enables us to study tiniest nanomolar concentrations of the archetypical potassium channel KcsA in native cellular membranes. This achievement was enabled by the use of the power of protons. Proton-detection in ssNMR spectroscopy represents a huge sensitivity advantage, and the spectral intensity can be increased by far more than one order of magnitude, thereby drastically speeding up measurements. Previously, proton-detection required highly-deuterated membrane proteins, which made it impossible to study the transmembrane part in cellular preparations.

To quantitatively study membrane proteins in their native cellular environment, we introduced a novel approach, dubbed fractional deuteration that combines moderate deuteration (~30 %) of side chains and ultra-fast sample spinning. This approach provides a great resolution and sensitivity in membrane proteins without sacrificing any important information.

First, in proteoliposomes, we used this approach to study the dynamics of KcsA’s selectivity filter, a critical functional element that is conserved across all potassium channels, and these channels are involved in essential functions of the human body, such as in neuronal signalling and in muscle contraction. Second, the high sensitivity of our proton-detected ssNMR approach even enabled us to study the KcsA channel directly in native cell membranes and at the atomic level. Importantly, our data strongly suggest that the selectivity filter also shows increased molecular dynamics in native cell membranes. 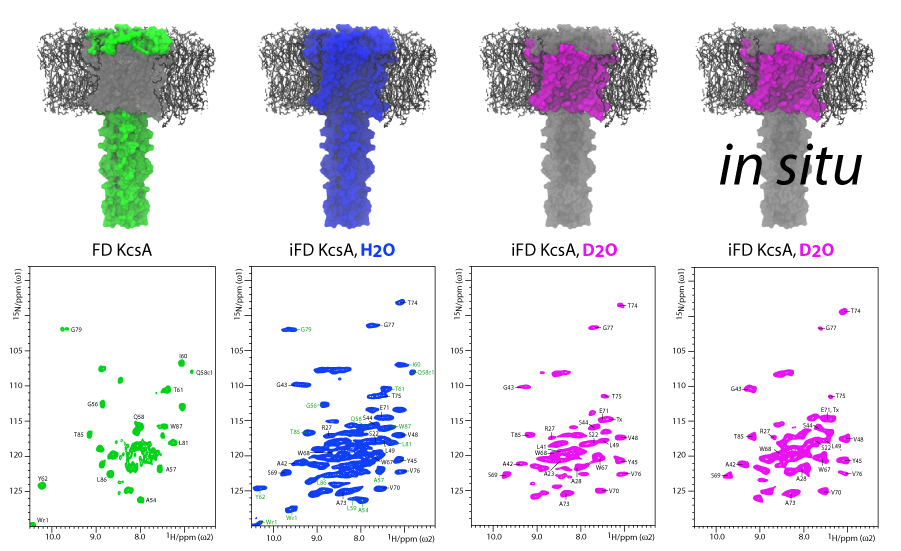 Fig. 2. Illustration of the different proton-detected labeling schemes developed in the Weingarth Group to study the different parts of membrane proteins. Fractional deuteration (FD, in green) gives access to water-exposed parts; inverse fractional deuteration (iFD, in blue and in magenta) give access to either the full membrane protein or the only the transmembrane part. These labeling schemes also works directly in native cellular membranes (shown in the right panel).

In conclusion, our study demonstrates, for the first time, the use of quantitative proton-detected ssNMR spectroscopy of cellular membrane proteins. We expect that our approach will open up new avenues for structural studies of membrane proteins in native cellular conditions and at the atomic level.