Colorectal is the fourth leading cause of cancer-related death worldwide. There were over 1.3 million new colorectal cancer cases worldwide, of which approximately 50% died as a result of the disease in 2012. Like all cancers, CRC is typically described in stages from I to IV. The mean 5-year survival rate for CRC is estimated to be less than 10% for stage IV, but could be as high as 90% for stage I. To reduce disease-specific mortality, it is therefore important to identify and treat CRC as early as possible. Although colonoscopy is currently the gold standard for the diagnosis of CRC, population screening by colonoscopy is hampered by high costs and the invasive nature of the procedure.

The implementation and participation for CRC screening could be significantly improved by using alternative non-invasive methods, such as using blood or stool-based biomarkers. Since genetic and epigenetic alterations influence the development of colorectal cancer (CRC), huge potential lies in the use of DNA methylation as biomarkers to improve the current diagnosis, screening, prognosis and treatment prediction. Here we performed a systematic review on DNA methylation-based biomarkers published in CRC, and discussed the current state of findings and future challenges. Based on the findings, we then provide a perspective on future studies. Genome-wide studies on DNA methylation revealed novel biomarkers as well as distinct subgroups that exist in CRC. For diagnostic purposes, the most independently validated genes to study further are VIM, SEPT9, ITGA4, OSM4, GATA4 and NDRG4. These hypermethylated biomarkers can even be combined with LINE1 hypomethylation and the performance of markers should be examined in comparison to FIT further to find sensitive combinations. In terms of prognostic markers, myopodin, KISS1, TMEFF2, HLTF, hMLH1, APAF1, BCL2 and p53 are independently validated. Most prognostic markers published lack both a multivariate analysis in comparison to clinical risk factors and the appropriate patient group who will benefit by adjuvant chemotherapy. Methylation of IGFBP3, mir148a and PTEN are found to be predictive markers for 5-FU and EGFR therapy respectively. 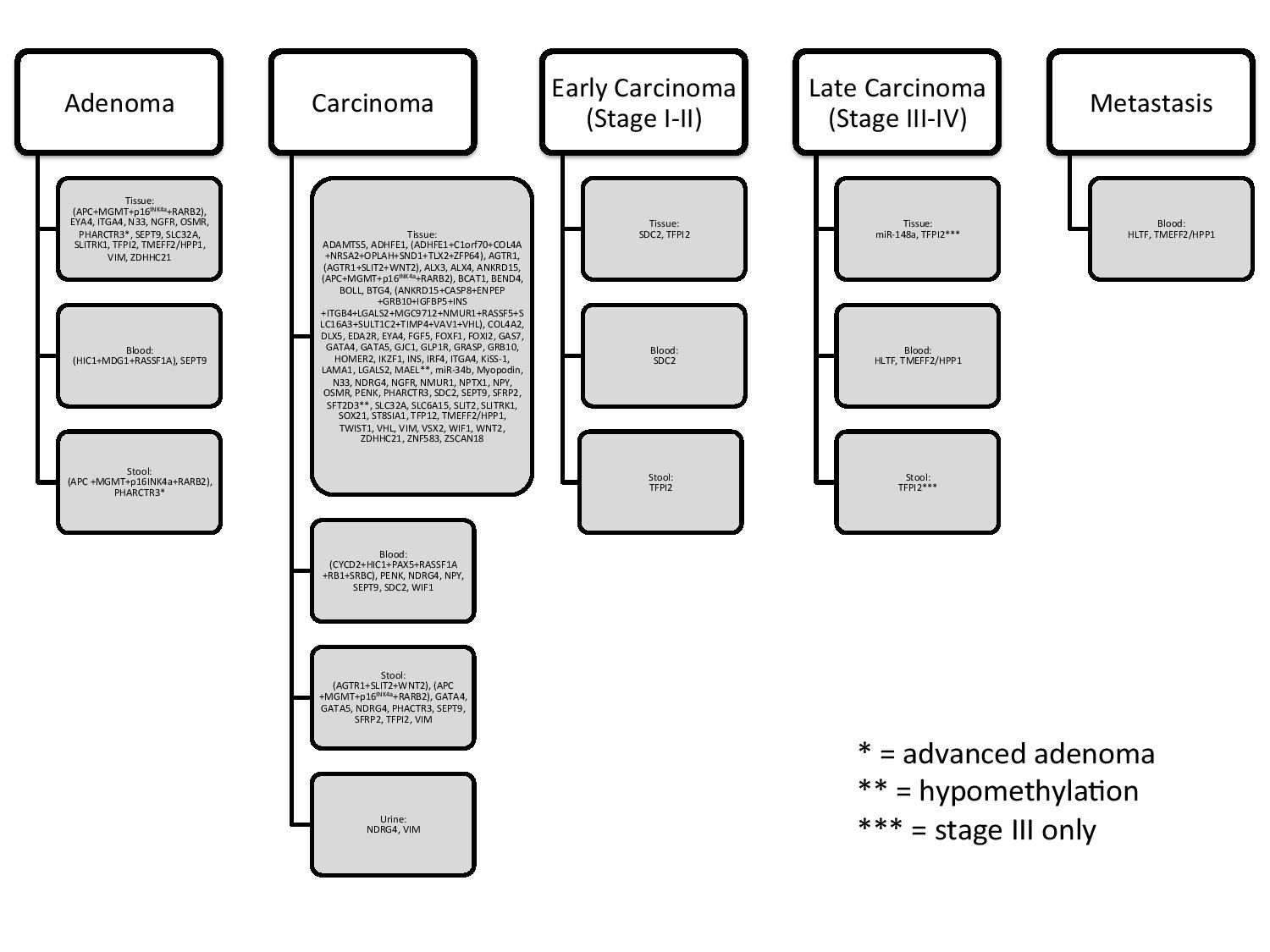 For therapy prediction, more studies should focus on finding markers for chemotherapeutic drugs as majority of the patients would benefit. Translation of these biomarkers into clinical utility would require large-scale prospective cohorts and randomized clinical trials in future. Based on these findings and consideration we propose an avenue to introduce methylation markers into clinical practice in near future. For future studies, multi-omics profiling on matched tissue and non-invasive cohorts along with matched cohorts of adenoma to carcinoma is indispensable to concurrently stratify CRC and find novel, robust biomarkers. Moreover, future studies should examine the timing and heterogeneity of methylation as well as the difference in methylation levels between epithelial and stromal tissues.