Do metals in pregnant women have association to preterm births? 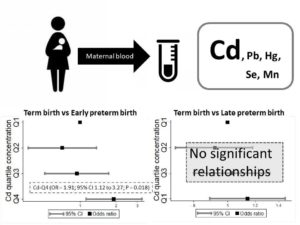 Therefore, we analyzed the association between maternal whole blood concentrations of metals, such as cadmium (Cd), lead (Pb), mercury (Hg), selenium (Se), and manganese (Mn) that are common toxicants in Japan, and preterm births.

The data of 14,847 pregnant women who were participants of the Japan Environment and Children’s Study (JECS) were used. Data of the self-questionnaire pertaining to the first trimester (T1), second/third trimester (T2), and medical records after delivery were analyzed. We divided preterm birth into two groups: early preterm (22 to < 34 weeks) and late preterm (34 to < 37 weeks). Maternal blood samples for measuring metal concentrations were collected in T2. The participants were classified into four quartiles (Q1–Q4) according to increasing metal levels.

The rate of preterm birth was 4.5%. After controlling for confounding factors, such as age, pre-pregnancy body mass index, smoking, partner’s smoking, drinking habits, gravidity, parity, number of cesarean deliveries, uterine infections, household income, educational levels, and sex of infant, Cd levels were found, by multivariable logistic regression analysis, to be significantly associated with early preterm birth, with odds ratio for early preterm birth of 1.91 (95% confidence interval: 1.12–3.27, P = 0.018) in subjects of Q4 compared with in subjects with term birth (≧ 37 weeks). In other words, there was a relationship between high whole blood concentrations of Cd in pregnant women and risk of early preterm births, but no relationship between Cd concentration and risk of late preterm births.

This is the first study to analyze the relationship between multiple metal concentrations and early and late preterm births in a large-scale cohort. Identification of the main sources of Cd and reductions of maternal Cd exposure may contribute to the prevention of early preterm births and health maintenance of mothers and their infants in the future.