Over the past decade there has been a dramatic rise in the number of shoulder and elbow injures to adolescent baseball pitchers. Fatigue has been shown to be a significant cause of injuries in adolescent baseball pitchers. As such, the goal of this study was to determine if pitching mechanics of adolescent pitchers changed as they became fatigued.  The study took 28 elite, adolescent pitchers between the ages of 13-16, and had them throw a simulated baseball game of 6 innings, with 15 pitches per inning. All pitches were fastballs thrown at 100% velocity from the windup. There was a 7-minute rest in between “innings”, and pitchers threw 10 warm up pitches prior to each inning. 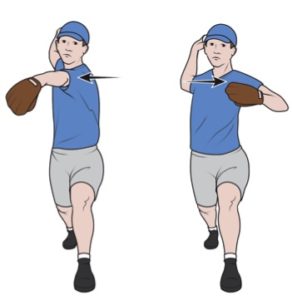 Picture demonstrating the difference between closed (left) and open (right) hip to shoulder separation. Notice the difference in the position of the shoulders between the two pitchers, especially in relation to the hips.

These pitches were videotaped by cameras at various angles, and measurements were taken following the simulated game of several parameters. Some of these parameters included the amount of flexion the pitcher’s elbow was in at the time they released the ball, how the hips and shoulder moved together during the pitch (known as hip to shoulder separation), how much outward rotation there was in the shoulder during certain phases of the pitching cycle, and others. In order to make sure the simulated game functioned properly and fatigued the pitchers, these pitchers answered questionnaires about their fatigue in between innings. The model worked as pitchers became more and more fatigued as the game went on. What we found after taking several hundred measurements is that essentially none of the expected measurements that were taken changed as the pitchers became fatigued save one. The amount of hip to shoulder separation significantly decreased as the pitchers became more and more fatigued. “Hip-to-shoulder separation” refers to the position of the hips relative to the shoulder just before the pitchers front foot contacts the mound, and has been linked with proper mechanics and faster pitches. Ideally, just before the front foot touches the ground, the hips rotate to face home plate while the shoulder and torso continue to face third base (for a right-handed pitcher). This difference in position allows pitchers to obtain additional acceleration through the powerful muscles of their core with trunk rotation, thereby transferring the most energy to the arm. The baseball pitch can be thought of as one connected chain of events, ending with the generation of a forceful pitch. However, the energy to create this pitch beings from the legs, and continues up through the torso until it ends in the shoulder and arm. As pitchers fatigue, this aspect of the chain breaks down and the hips and shoulders rotate as one, preventing the pitcher from obtaining additional power through the torso. What this means is that pitchers need to work on strengthening their core to prevent injuries to their shoulder and elbow. Injury prevention programs in which pitchers undergo core strengthening should be instituted to decrease the risk of shoulder and elbow injuries in these patients.