When you are delimiting species, the units of biodiversity, you must be as up-to-date as possible. We are everyday finding out new things about the living world: discovering new species, reworking the classification and affinities of old ones, and so on.  How are we going to conserve species if we don’t really know what they are?  The case of the Artiodactyla (the cloven-footed hoofed mammals) in China is instructive. 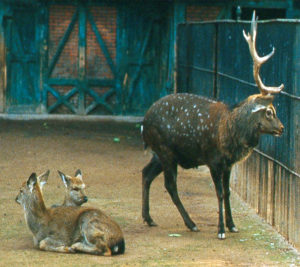 It is quite extraordinary that until recently the classification of Artiodactyla which is today in general use is based, with little change, from a series of volumes published between 1913 and 1915 by the eminent zoologist Richard Lydekker!  In the middle of the 20th century, mammal specialists from the London Natural History Museum revised the classification of mammals of the Old World, sometimes accepting what Lydekker had said, sometimes rather peremptorily saying that he had recognised too many species, so they pruned them down.  It was only in 2011, with the publication of the book Ungulate Taxonomy, which I co-authored with the late Peter Grubb, that the whole question was finally revised.  We pointed out that not only has a great deal been discovered about who mammals in the meantime, but even the concept of a species has changed.  A species is, quite simply, an evolutionary lineage: “the smallest population or aggregation of populations which has fixed heritable differences from other such populations or aggregations”. Species are units of taxonomy, and of biodiversity in general.

Until our 2011 publication, the International Union for the Conservation of Nature (IUCN) recognised just 30 species of artiodactyls in China: the wild camel, one species of pig, one species of musk-deer, 14 species of true deer, and 13 species of bovids (that is to say, wild cattle, wild sheep and goats, and antelopes), and I regret to say that, in the main, they are still afraid to change what we have spuriously “known” for the best part of a century.  Peter Grubb and I looked carefully at all the information on the hoofed mammals, including work that has been done on their DNA, and concluded that there are actually 57 species!

What difference does this make?  We can use the sika as an example.  These are medium-sized deer, anything from 50 cm to 1 m tall, reddish-brown in colour, sometimes spotted, with a white rump-patch; the males have slender antlers, with one branch above the brow and just one more, halfway up the main beam.  They used to be found all over China, into Vietnam in the south and the Russian Far East in the north, as well as in Taiwan and throughout Japan.  The IUCN still says that there is just one species of sika, Cervus nippon; they admit that in mainland China sika are now extremely reduced in number, their range fragmented, but as they are so numerous (and even increasing) in Japan and in Taiwan, as far as conservation is concerned they are of “Least Concern”.  But Peter Grubb and I found that mainland, Taiwanese and Japanese sika are in fact quite different from each other – indeed, there are actually three species in China, one in northern China and the Russian Far East, one in an isolated area of Sichuan, and one in southern China and northern Vietnam.  The old-fashioned “traditional” view of IUCN is actually likely to harm the prospects of the survival of these three mainland species!

This story, of conservation groups actually jeopardising the survival of the animals they are aiming to protect, is all too common as far as large mammals are concerned.

Systematics of the Artiodactyla of China in the 21(st) century.
Groves C
Dongwuxue Yanjiu. 2016 May 18