Sepsis is due to bacterial infection. If it is sustained for several days, it can trigger severe abnormalities of cardiac function which leads to death in 50% of cases. This probably occurs through activation of toll-like receptors by bacterial lipopolysaccharides and overproduction of pro-inflammatory cytokines such as TNF-α and IL-1β. It is associated with deep cardiac oxidative stress and depression of mechanical function. In contrast, early sepsis is characterized by the development of tachycardia. 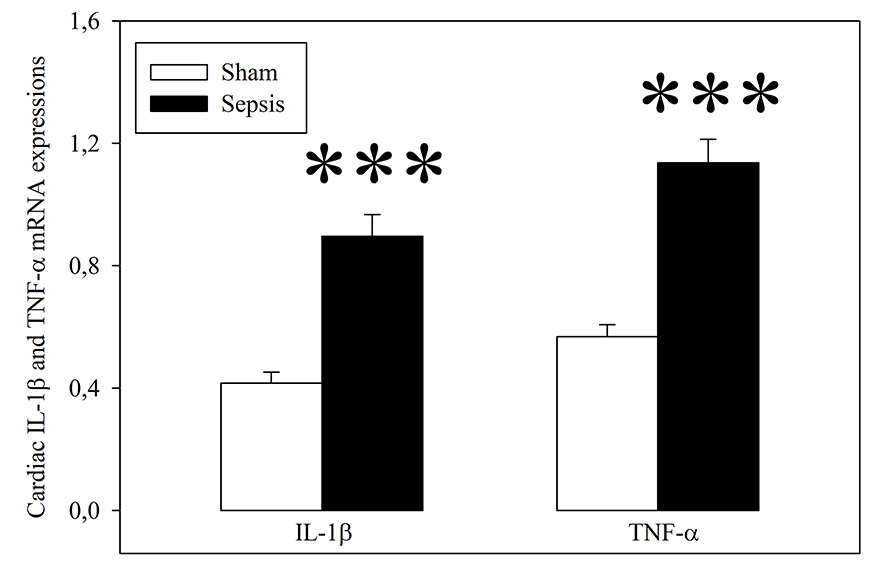 This study aimed at determining the early changes in the cardiac function during sepsis and at finding the mechanism responsible for the observed changes.

Sixty male Wistar rats were randomly assigned to two groups, the first one being made septic by cecal ligation and puncture (sepsis group) which allows the release of intestinal bacteria in the abdominal cavity and the second one being subjected to the same surgery without cecal ligation and puncture (sham-operated group). The cardiac function was assessed in vivo and ex vivo in standard conditions. Several parameters involved in the oxidative stress and inflammation were determined in the plasma and heart.

As evidenced by the plasma level of TNF-α and gene expression of IL-1β and TNF-α in the heart, inflammation was developed in the sepsis group. Indeed, the plasma TNF-α concentration increased from 10.8 ± 0.9 in the sham-operated group to 20.4 ± 5.2 pg/ml in the sepsis group p < 0.05). In the heart, IL-1β and TNF-α mARN expressions were increased by +124 (p < 0.001) and +97% (p < 0.001) by sepsis, respectively (Fig. 1). The cardiac function was also slightly stimulated by sepsis in the in vivo and ex vivo situations. In the in vivo situation, this was observed through an increase in the heart rate (+11%, p < 0.05). In the ex vivo isolated heart, the cardiac activation was noticed only when the coronary flow was increased to the value of 24 ml/min (+22% for the dP/dt max, p < 0.05). A representative estimation of the relationship between the contractility and coronary perfusion pressure even suggested that the difference could be ampler if the coronary flow would have been increased at a higher level. The sepsis-induced stimulation of the cardiac function was associated with unchanged levels of plasma and cardiac oxidative stress estimated as the upholding of thiol groups (protein oxidation), total antioxidant capacities and glutathione peroxidase activity (an enzyme involved in reactive oxygen species detoxification). However, several parameters indicated a lower cardiac production of reactive oxygen species in the septic group (Fig. 2). The cardiac level of oxidized glutathione was reduced (-27%, p < 0.05) and the ratio between the reduced and oxidized forms of glutathione was significantly increased (+34%, p < 0.01). This suggested that less reduced glutathione was necessary for mitochondrial reactive oxygen species detoxification by the glutathione peroxidase in the septic group. 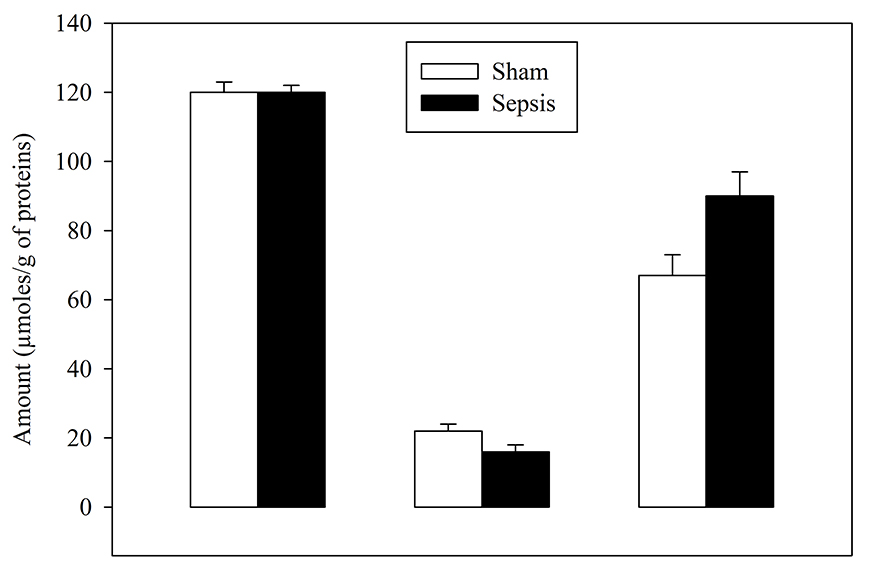 Taken together, our results showed that, despite the development of inflammation, early sepsis did not increase reactive oxygen species production and did not reduce myocardial function. The depressant effect of TNF-α and IL-1β on the cardiac function is known to occur at very high concentrations. The influence of low- to moderate-grade inflammation on the myocardial mechanical behavior must thus be revisited.