Electron collisions with atoms, ions, molecules, and surfaces are critically important to the understanding and modeling of low-temperature plasmas (LTPs), and hence in the development of technologies based on LTPs.  Progress in obtaining experimental benchmark data, the development of highly sophisticated computational methods, and the use of the fundamental scattering data obtained with these methods, were highlighted in a recent Perspective. As a result of collaborative and coordinated experimental and theoretical/computational efforts in basic research, with the goal of providing benchmark data for thoroughly testing the reliability of various theoretical approaches, theory has advanced to a point that there is now confidence in many theoretical predictions of fundamental collision processes for which no experimental data are (and possibly never will become) available. However, these data are required in self-consistent modeling efforts for plasmas, and they have been used successfully on many occasions. The production of fundamental electron-scattering data in this manner is accelerating the development of society-benefiting technologies. 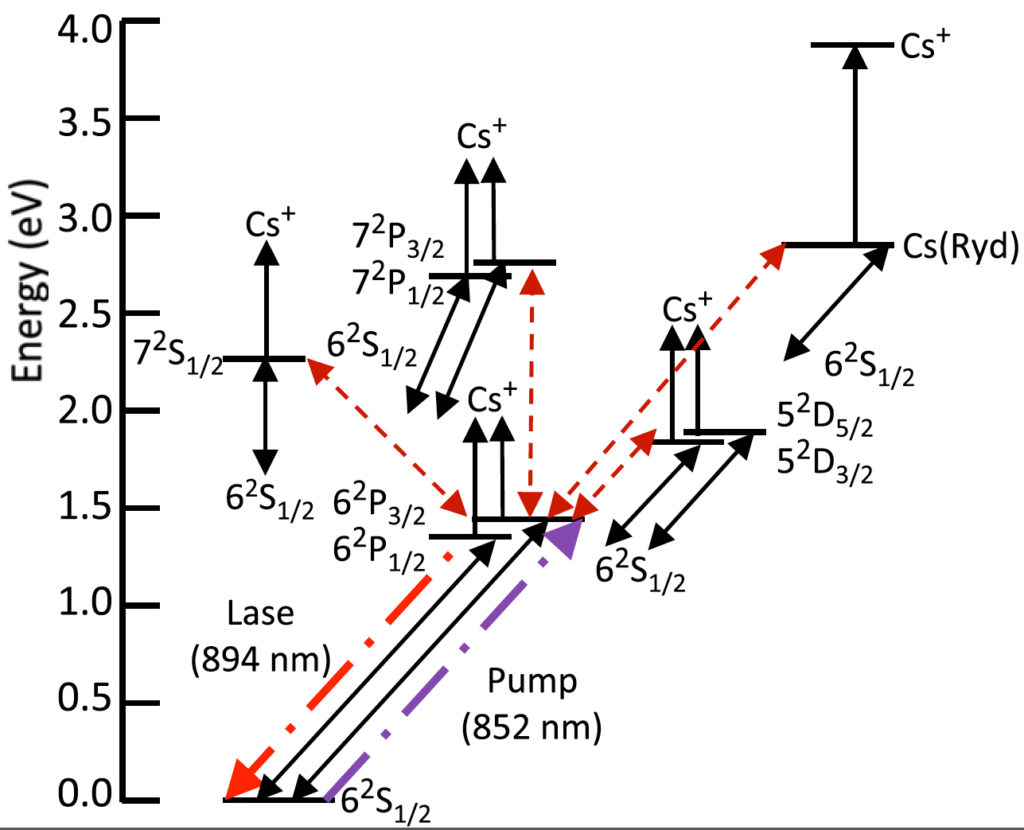 The cesium-based diode-pumped alkali laser (DPAL) is one example in which accurate and comprehensive datasets for electron collisions enable complex modeling of plasma-using technologies that empower our high-technology–based society.  DPALs are a class of optically pumped lasers that leverage inexpensive semiconductor diode lasers (DLs) to pump alkali vapor. The generally poor optical quality and the wide bandwidth of a DL are converted into high optical quality, narrow bandwidth from the alkali laser.  In DPALs, large densities of resonant excited states in alkali vapor are produced by laser pumping. With preexisting or laser-generated seed electrons, electron heating and associative ionization may result in plasma formation, which has the potential to reduce the efficiency of the conversion.

A specific example concerns the computational investigation of a pulsed DPAL in He/Cs/C2H6 and He/Cs/N2 mixtures with lasing occurring on the Cs (6p)2P1/2 → (6s)2S1/2 transition at a wavelength of 894 nm. Figure 1 gives an impression of the processes that are relevant for electron collisions with Cs atoms.  The latter are by no means the only pieces needed for the puzzle, but they turn out to be a very important ingredient – in addition to data for electron collisions with helium atoms and ions, their dimers, as well as nitrogen atoms, ions, and molecules formed by Cs, He, and N.  Note that cross sections for collisions with Cs atoms in their ground state are not sufficient, but data for collisions with atoms in excited states, including short-lived species, are needed as well. Such data are extremely difficult to obtain experimentally, and hence modelers have to rely on theoretical predictions.

Fig. 2. Left: Cross sections predicted by the BSR approach for electron collisions with Cs atoms in the (6p)2P3/2 excited state. Right: densities of Cs species and electrons during high-power DPAL pumping of a He/N2/Cs gas mixture at 600 Torr and 400 K after the 100th pump pulse.

An example of modeling the DPAL with those numerically generated data is shown in the right part of Figure 2. These results were produced with a global kinetics, collisional-radiative model. They revealed that significant plasma formation indeed occurs, ultimately reducing the laser power by depletion of the ground state through ionization and by electron-collision mixing of the laser levels.