Emerging diversity of the CRISPR-Cas system in cholera phages

Interactions of bacteria and their phages, which are viruses hostile to bacterial survival lead to the evolution of numerous phage resistance mechanisms.  CRISPR-Cas (clustered regularly interspersed short palindromic repeats-CRISPR-associated proteins) is such a defense system of bacteria. The CRISPR-Cas system comprising of nuclease genes as well as genes for non-coding RNA elements can destroy invading phage DNA by chopping up the DNA at specific sites. A CRISPR array in the bacterial DNA consists of short directly repeated nucleotide sequences  separated by diverse short spacer sequences. The spacers are initially derived from pieces of phage DNA during a previous encounter of phages with the bacteria. To function, the non-coding CRISPR array is transcribed and cleaved within the direct repeats into short crRNAs containing individual spacer sequences. The crRNAs guide the Cas nucleases to the target site which has a sequence complementary to the spacer sequence of the crRNA, and the Cas nucleases degrade the invading phage genome.

Fig. 1. Structure of CRISPR-Cas system carried by phages JSF5, JSF6, JSF13, and JSF17 showing the diversity and arrangement of the spacers. The repeat (28bp) and spacer (32 bp) are shown as green diamonds, and red rectangles respectively. An AT-rich leader sequence precedes each CRISPR locus (black rectangle).

In another approach, bacteria defend against phage infection by hosting a chromosomal island called phage-inducible chromosomal island (PICI). Being excised from the chromosome upon phage infection, this island circularizes, replicates and interferes with phage reproduction.  Vibrio cholerae strains which cause cholera epidemics have been found to carry PICI-like elements (PLE) that can resist virulent phages, which would normally kill these bacteria if they did not carry PLE. The currently prevalent El Tor biotype strains of V. cholerae do not carry a CRISPR-Cas system, and hence PLE mediated inhibition of phage replication is prominent in these strains. Remarkably, V. cholerae specific phages  have been shown to carry a CRISPR-Cas system instead, which inactivates the function of PLEs in the V. cholerae El Tor strains. The CRISPR arrays in these phages carry spacers with complete sequence identity with different regions of the 18-kb PLE carried by the bacterial strains.

In our recent study (Naser et al., 2017), we discovered evolving features of the phage encoded CRISPR-Cas system in the natural context of Bangladesh, where cholera epidemic occurs regularly, and the epidemics reportedly collapse due to predation of the pathogen by phages.  Using whole genome sequencing, we analyzed a collection of phages and V. cholerae isolated during seasonal cholera epidemics between 2001 and 2015 to monitor changes in the distribution of PLE and the phage-encoded CRISPR-Cas system. Five distinct but related phages carrying the CRISPR-Cas system, and possible CRISPR-Cas negative progenitor phages were identified. Furthermore, CRISPR arrays in the phages were found to have evolved by acquisition of new spacers targeting diverse regions of PLEs carried by the V. cholerae strains (Fig. 1), enabling the phages to efficiently grow on PLE positive strains. Phages that have an increased number of these spacers were also more effective in infecting cholera bacteria, suggesting that acquiring more than one CRISPR spacer sequence increases the ability of the viruses to evade the bacterial defense (Fig. 2).

Our results demonstrate a continuing arms-race involving genetic determinants of phage-resistance in V. cholerae, and the phage-encoded CRISPR-Cas system, presumably fostered by their enhanced interactions during seasonal epidemics of cholera. This study thus represents a potent natural experiment to understand how the phage encoded CRISPR/Cas system is evolving over time. This system differs from most known CRISPR-Cas systems in that it is not found in bacteria, but in the viruses that attack bacteria. 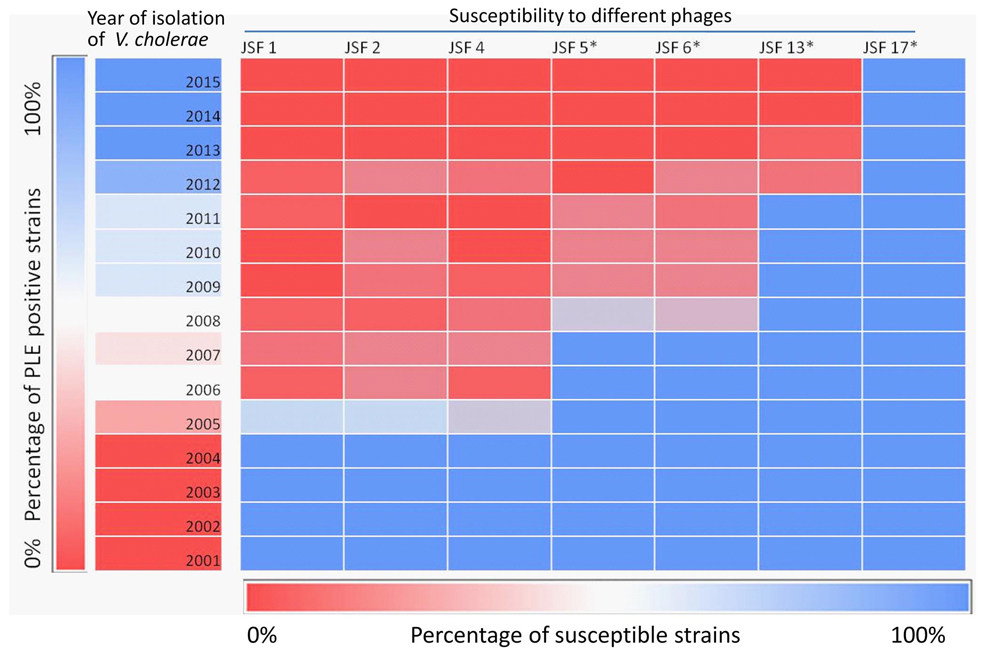 Fig. 2. Co-evolution of V. cholerae O1 and their phages in the PLE versus CRISPR-Cas mediated arms’ race. Heat chart showing the susceptibility of a chronological collection of V. cholerae O1 isolated during seasonal epidemics of cholera during 2001 through 2015 in Bangladesh to 8 different phages. Phages shown with asterisk are positive for the CRISPR-Cas system.

This work could potentially lead to engineer phages carrying optimal CRISPR-Cas systems to evade bacterial defense against viruses, thus killing them more effectively. This knowledge would also have significance in developing potential phage mediated intervention strategies to control cholera or other bacterial infections.